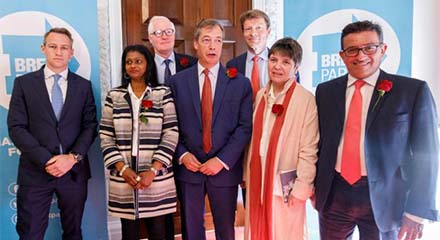 Nigel Farage is back. Again. And it looks like his fourth (or is it his fifth?) incarnation might be his most successful one yet. A YouGov poll for the May 23 European Union elections has his Brexit Party on 27% (sharply up from 15% the week before), followed by Labour on 22%, the Tories on 15% and the UK Independence Party on 7%. The Greens are on 10%, the Liberal Democrats on 9% and the saboteurs of the snappily titled ‘Change UK’ – formerly known as The Independent Group – are languishing at 6%. There was an expectation that Change UK and the Lib Dems would get it together in some kind of ‘remain’ alliance – perhaps with the Greens, Plaid Cymru and the Scottish Nationalist Party. After all, fighting for a second referendum was officially one of the key reasons for TIG’s split from the Labour Party (along with Labour’s alleged widespread anti-Semitism, of course).

But, somewhat surprisingly, it is not to be, as Chuka Ummuna explains:

Various disappointed bourgeois commentators have already pointed out that there were other methods with which pro-‘remain’ parties could have presented a more effective challenge: for example, by dividing up regions between them.

Overconfident public schoolboy that he is, Ummuna tries to assure them that “there is already a grassroots, ‘remain’ alliance – Change UK-TIG is it.” But, as they have also buggered up their application to stand in the local elections, these anti-Corbyn rightwingers continue to make headlines only for their ineptness: in the first 24 hours after the launch of its EU election campaign, two of Change UK’s European candidates have already been forced to step down for posting racist tweets. The only real ‘success’ they can claim is the fact that they got the Corbyn leadership to take yet another step back: in the hope of stopping other MPs from splitting because they fear being deselected by the local membership, Labour HQ has still not published a timetable to implement the reformed trigger ballot system – the only realistic way local Labour members can get rid of their sitting MP.

The undemocratic selection method for Labour’s EU candidates underlines the problem: ordinary members had zero input. In a brief email they have been informed – after the fact – that, “sitting MEPs who wished to stand again have been re-selected. Candidates for remaining places on the list have been appointed by joint NEC and regional selections boards following interviews earlier this week.” That means 16 out of Labour’s 20 sitting MEPs have automatically been reselected. The newcomers include Jeremy Corbyn’s right-hand woman, Katy Clarke, and Momentum organiser Laura Parker, who has been heavily promoted by her boss, national executive member Jon Lansman. But overall the selection process has demonstrated yet again that the Corbyn leadership is continuing to try and appease the right in the party – even though this demonstratively does not work.

It seems unlikely that those elected on May 23 will remain MEPs only until October 31; we expect there will be more ‘deadlines’ and more extensions of Britain’s EU membership. And the fact that we are the middle of a huge constitutional crisis clearly makes this an important election. When have candidates for MEP positions ever received so much coverage in the national press?

Only one thing seems clear: unless the Tories get shot of Theresa May pronto – replacing her with somebody who looks like he/she could make Brexit work (a miracle) – they will receive an absolute trashing on May 23. A questionnaire of Tory members for the Conservative Home website found 62% were planning to vote for the Brexit Party, and only 23% intended to vote for their own. And a poll of Conservative councillors for the Mail on Sunday found that 40% of them were planning to vote for Nigel Farage’s party, and only 52% for the Tories. Sure, a lot can happen in six weeks and these polls are clearly biased – but undoubtedly they are telling a certain truth.

Nigel Farage’s latest organisation certainly has a lot of forward momentum. Former Tory MP Ann Widdecombe is the latest ‘celebrity’ to join the former Ukip leader. All things being equal, it looks as if the party will do as well as – if not better than – Ukip did at the last European elections in 2014, when it came first with 27.5 % of the vote. The Brexit Party already has a sizeable fraction in the European parliament – 14 of the 24 MEPs elected as Ukip members have already switched allegiance since it was launched in January.

Nigel’s former party, Ukip, meanwhile, has Tommy Robinson, Carl Benjamin (he who “wouldn’t even rape” Jess Phillips MP) and Mark Meechan, also known as Count Dankula – the man who was fined £800 for teaching his dog to perform a Nazi salute when he shouted things like “Sieg Heil”. They seem to be aiming to win the votes of – how to put this? – a particularly narrow and alienated section of the working class, which tends to be male and very white.

Compared to those clowns, the Brexit Party really does look rather sane. Farage is, of course, a Tory at heart, albeit a very rightwing one. He has assured people that he is “sorry to be taking votes from the Conservatives” and that his main target are “disappointed Labour voters in the northern heartlands”.

And a certain Claire Fox is supposed to be covering his left flank. Fox was a leading member in the Revolutionary Communist Party and all its transformations since: Living Marxism, Spiked and the Institute of Ideas, which is now the Academy (!) of Ideas. Her sharp move to the right has been characterised by the belief that capitalism is a really good thing and that the world needs more of it (for example, to end hunger in Africa). For the last decade or so, the output of Fox and other co-thinkers like Frank Furedi and Mick Hume could at best be described as rightwing libertarian.

Another candidate on Farage’s list is Spiked contributor Alka Sehgal Cuthbert. She unconvincingly explains how she, “as an Indian”, can support a party committed to keeping out refugees and foreigners:

The EU is not a haven of social justice – it is a thoroughly racist institution. In order to maintain EU free movement, it has to ensure its borders are kept tightly sealed against non-EU people.

She is obviously aware that Farage happens to be the guy who during the 2016 referendum campaign unveiled his ‘Breaking Point’ poster, which depicted threatening masses of Syrian refugees bound for the UK. So she quickly and unconvincingly points out: “That poster, or anything else Brexit Party leader Nigel Farage may have said, pales into insignificance compared with the egregious racism of the EU.” So Farage is not quite as bad as the EU then. Not much of an endorsement.

Claire Fox, on the other hand, overplays her leftie credentials just a little bit when she assures us in an article for the Daily Mail that she has been a “leftwing campaigner for 35 years. I’ve been arrested on picket lines, led anti-imperialist demonstrations and spoken at anti-deportation protests outside police stations.”It’s been a while though, hasn’t it, Claire?

She leaves out the fact that Spiked has been arguing for years that the labels ‘left’ and ‘right’ are oh so wrong and old-fashioned, because, don’t you know, “We live in a world beyond left and right politics”. In her article, she briefly references this position by claiming that, “the left-right divide has been replaced by democrats vs anti-democrats”, before describing herself as a “lefty” a few more times. To top it all, she claims to be acting in the tradition of the “Levellers during the Civil War, the Chartists in the 19th century or the suffragettes in early 20th”.

For Claire Fox and her ilk, “sovereignty” is the key, because we “remain shackled to Brussels”. She cannot see any problem with standing alongside Farage, because this is a “once-in-a-lifetime” opportunity to save “our democracy” from those evil foes in the EU. Fox has a problem only with the EU version of capitalism, because it is too regulated and Spiked very much believes in the free market – free for the capitalists, not for immigrants, obviously. Some “lefty”.

Slightly more sad – though not entirely surprising – is George Galloway’s support for Farage. On April 17, he declared on Twitter:

Given the nature of Labour’s Euro-fanatic candidates list and the crucial juncture we have reached in the fight for the full implementation of the Brexit referendum result and for one time only, I will be supporting Nigel Farage in next month’s elections.”

Clearly, he has given up hope of ever getting back into the Labour Party. Galloway seems to agree with Farage on the need for tougher immigration controls: “Being opposed to mass immigration is not (necessarily) racist,” he writes – “only Trotskyites and globalised capitalists really believe in ‘open borders’.”

This is nothing new, of course. He already outlined his reactionary beliefs in 2005 when he was still allied with the Socialist Workers Party in Respect. The SWP kept schtum when he wrote an infamous article in the Morning Star, where he called for “an economic-social-demographic plan for population growth based on a points system and our own needs” (ie, the needs of British capital). He claimed that the scrapping of immigration controls would mean “urging all the most accomplished and determined people to leave the poor countries of the world and come to the richest, [making] the poor countries even poorer and the rich countries richer”. 1)Morning Star February 12 2005

No doubt, Farage will have some success in appealing to Brexit-supporting members of the working class who usually vote Labour and would probably do so in a general election – in fact, we have been rather disturbed to see evidence of that in Corbyn-supporting Facebook groups. Not because of Claire Fox posing unconvincingly as a leftwinger, but because the Labour Party will have to continue to ‘sit on the fence’ for as long as possible, if it does not want to seriously alienate large sections of its electoral base on either side of the Brexit divide.

In the EU poll (as well as the local elections), we urge our supporters to vote Labour – despite the many, many shortcomings of the Corbyn leadership. There remains a window of opportunity to radically transform the Labour Party into a united front of a special kind. 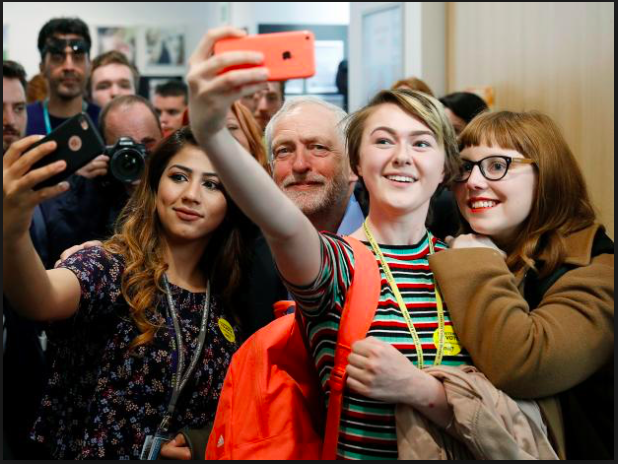 Things have just got even better

June 16, 2017 Comments Off on Things have just got even better 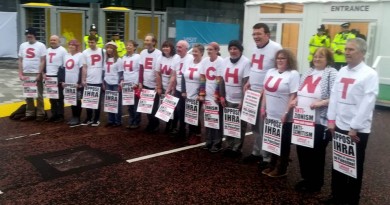 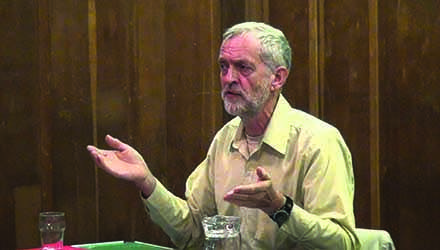 It can still be done