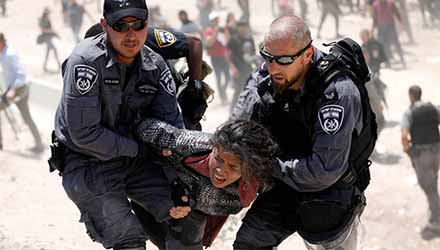 Any colonial-settler project must involve systematic discrimination against the indigenous population. Moshé Machover calls for the deZionisation of Israel

That Israel is a racsist state is a well-established fact. On July On July 19 2018, it enacted a quasi-constitutional nationality bill – ‘Basic law: Israel as the nation-state of the Jewish people’ – which has been widely condemned as institutionalising discrimination against Israel’s non-Jewish citizens. As many have observed, this law merely codifies and formalises a reality that long predates it.1)Thus, for example, Bernie Sanders remarked in passing that “the recent ‘nation state law’ … essentially codifies the second-class status of Israel’s non-Jewish citizens”. (‘A new authoritarian axis demands an international progressive front’, The Guardian, 13 September 13 2018). Within its pre-1967 borders, Israel is an illiberal semi-democracy. It defines itself as “Jewish and democratic”, but, as its critics point out, it is “democratic for Jews, Jewish for others”. In the territories ruled by it since 1967, Israel is a military tyranny, applying one system of laws and regulations to Jewish settlers and an entirely separate one to the indigenous Palestinian Arabs.

In Israeli public discourse, racist speech is extremely common even at the highest echelon of politics. Some of this high-level racist discourse is almost casual, such as Benjamin Netanyahu’s infamous “Arabs voting in droves” video 2)“The right-wing government is in danger. Arab voters are heading to the polling stations in droves. Left-wing NGOs are bringing them in buses.” https://www.theguardian.com/world/2015/mar/17/binyamin-netanyahu-israel-arab-election on election day, March 17 2015; or the “we are not Arab lovers” declaration of Isaac Herzog, leader of Israel’s Labor Party. 3)‘We are not Arab lovers – Israeli Labor’s bankrupt efforts to stave off decline’, Middle East Eye, 25 April 2016, https://www.middleeasteye.net/columns/when-israels-main-opposition-party-has-problem-countrys-palestinian-citizens-1878921672  At the most obscene end of the range there are statements by senior politicians containing barely concealed calls for ethnic cleansing.

Some of the harshest condemnation of Israel’s racism is voiced by two Israeli academics, who, as recognised experts on the history of fascism and Nazism, speak with considerable authority.

Professor Zeev Sternhell is emeritus head of the department of political science at the Hebrew University of Jerusalem and one of the world’s leading experts on fascism. In an article published earlier this year, he referred to statements made by two senior Israeli politicians, members of the ruling coalition, Bezalel Smotrich (deputy speaker of the Knesset, Israel’s parliament) and Miki Zohar (chair of one of the Knesset’s most important committees). These statements, Sternhell writes4)‘In Israel, Growing Fascism and a Racism Akin to Early Nazism’, Ha’aretz January 19 2018, https://www.haaretz.com/opinion/.premium-in-israel-growing-fascism-and-a-racism-akin-to-early-nazism-1.5746488?=&ts=_1537002401268, “should be widely disseminated on all media outlets in Israel and throughout the Jewish world. In both of them we see not just a growing Israeli fascism, but racism akin to Nazism in its early stages.”

This shocking comparison with Nazism is endorsed by Daniel Blatman, professor of history at the Hebrew University of Jerusalem, whose book The death marches: the final phase of Nazi genocide won him in 2011 the Yad Vashem International Book Prize for Holocaust Research. In an article published last year he commented: “deputy speaker Bezalel Smotrich’s admiration for the biblical genocidaire, Joshua bin Nun, leads him to adopt values that resemble those of the German SS.” 5)‘The Israeli Lawmaker Heralding Genocide Against Palestinians’, Ha’aretz May 23 2017, https://www.haaretz.com/opinion/.premium-the-israeli-mk-heralding-genocide-against-palestinians-1.5475561. The biblical reference is to the book of Joshua, which contains a mythical account of the conquest and ethnic cleansing of the land of Canaan (Palestine) by the Israelites. The account is of course purely fictitious, but is taken as inspiration and virtual blueprint by the likes of Smotrich

Blatman returned to this topic in a more recent article:

Another elected official from the ruling coalition, Likud’s Miki Zohar, did not hesitate to state that the Arabs have a problem that has no solution – they are not Jews and therefore their fate in this land cannot be the same as that of the Jews .…  Prof Zeev Sternhell wrote in this paper earlier this month that this racism is “akin to Nazism in its early stages.” I think it is Nazism in every way and fashion, even if it comes from the school of the victims of historical Nazism.

He concludes that “if a racism survey were held in western countries like the one on anti-Semitism, Israel would be near the top of the list.” 6)‘International Holocaust Remembrance Day: An Israeli Hypocrisy’, Ha’aretz January 28 2018, https://www.haaretz.com/israel-news/.premium-international-holocaust-remembrance-day-an-israeli-hypocrisy-1.5768945

Exposing Israel’s racism is all too easy. Mere denunciation, without explanation of its underlying context, may actually be misleading if not counterproductive; it may appear as singling Israel out for some peculiar and exceptional moral defect of its leaders or, worse, of its Jewish majority. In fact, racist structures and attitudes, wherever they occur, are part of the legal and ideological superstructure and cannot properly be understood in isolation from their material base.

This committee to be appointed to superintend and direct all matters of colonisation; it shall consist of ten members, and have its seat in London. 7)www.jewishencyclopedia.com/articles/2612-basel-program

The Congress also resolved to establish a bank to finance the activities of the Zionist movement. The bank was duly incorporated in London in 1899; its name was the Jewish Colonial Trust.8)www.jewishvirtuallibrary.org/jewish-colonial-trust Well into the 20th century, Zionists continued to describe their project unabashedly, in a perfectly matter-of-fact way, as one of colonisation. Later in the 20th century this usage became a public relations liability, and the term was replaced by various euphemisms. But the practice of colonisation of Palestinian land has continued unabated and is going ahead at full steam to this day.

This context makes Israel’s racism quite ‘natural’, in the sense of conforming to a general law. Every colonisation of an already inhabited territory is accompanied by racism. This is the case whether or not the colonisers arrive with preconceivedracist ideas. Colonisation invariably meets resistance by the indigenous people. This was clearly understood, for example, by Vladimir Jabotinsky (1880–1940), the founder of the Zionist current that has been politically dominant in Israel for the last 41 years. In his seminal article ‘The iron wall’ (1923) he wrote:

In their conflict with the ‘natives’, the settlers tend to develop a racist ideology as self-justification.

We can say more. Racism in general comes in many different variants, and colonisers’ racism takes different forms, depending on the type of colonisation. In colonisation based primarily on exploiting the labour-power of the indigenous people, the latter are usually depicted by the colonisers as inferior creatures deserving no better fate than working for their conquerors.

But in colonisation based on excluding and displacing the ‘natives’ rather than incorporating them into the colonial economy as workers, they are usually depicted as dangerous wild and murderous people who ought to be ethnically cleansed. Zionist colonisation belongs to this category. In this respect, it is not unlike the colonisation of what became the United States, except that the Zionist organisation insisted explicitly and deliberately on denying employment to non-Jews. 10)See the 1929 constitution of the Jewish Agency, https://tinyurl.com/ycq3nqpo

In the US Declaration of Independence, the freedom-loving founding fathers – only some of whom were slave owners – complain that the king of Great Britain “has endeavoured to bring on the inhabitants of our frontiers, the merciless Indian savages whose known rule of warfare is an undistinguished destruction of all ages, sexes and conditions.” In today’s terminology they would no doubt be described as ‘terrorists’. The Palestinian Arabs are Israel’s “merciless Indian savages”.

To conclude: apart from its anachronism, there is little that is exceptional about Israel’s racism. It is rooted in its nature as a settler state. Uprooting colonialist racism requires a change of regime, decolonisation – which in the case of Israel means de-Zionisation. 11)See my article ‘The decolonisation of Palestine’, Weekly Worker June 23 2016, https://weeklyworker.co.uk/worker/1112/the-decolonisation-of-palestine/ 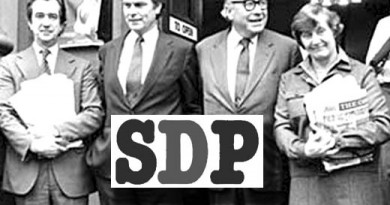 Labour split: Lessons of the SDP

February 14, 2019 Comments Off on Labour split: Lessons of the SDP 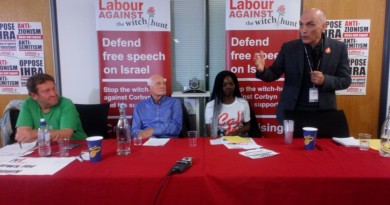 July 4, 2019 Comments Off on Bitter fruit of appeasement