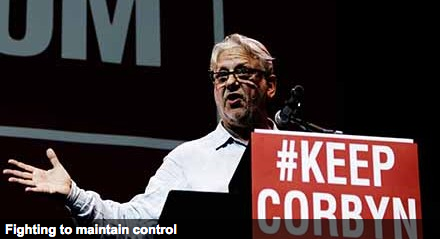 Allies of Jon Lansman have produced a draft constitution for Momentum. William Sarsfield takes a look

We should start with Jackie Walker’s pungent assessment of the “proposal” published on Momentum’s MxV online forum. She writes: “So here we have the coup coming to fruition. This is appalling.”

Comrade Walker’s damning indictment of the three-page proposal is hard to quibble with. I would personally add that in my decades of political work on the left I have rarely, if ever, had the misfortune to come across a more wretched, cynical document than this farcically misnamed ‘A transparent structure that involves all Momentum members and groups’.

So it is appropriate we start with Momentum’s annual conference. Traditionally in the workers’ movement, the conference/congress represents the organisation as a whole. It is empowered to take decisions about every aspect of its programmatic, political and tactical orientations. In the Lansman draft, however, conferences are redubbed “national gatherings”, whose primary purpose is “like The World Transformed” to be “a space for members to share skills and experience, debate ideas and coordinate activity … an opportunity for political education, and to showcase the wealth of ideas being developed within our movement”.

Almost as an afterthought, it adds that “time will be set aside for the debating of the eight proposals which qualify for national referenda …” Yes, that’s right – only eight “proposals” (not ‘motions’ obviously) can actually be voted on every year.

Before we look at the laughable process of ‘qualification’ that these “proposals” must go through, it is it is important to note that this “national gathering” is not by definition Momentum’s sovereign body: its participants have not been elected by an official body of the national organisation. They are simply people who turn up for the event on the day and may or may not be interested in a chat on some motions other people have chosen for them to talk about. It is a pointless discussion as part of an arcane process. The level of interest and engagement that we (and the online audience) will see among the meat-space participants will probably reflect that disengagement.

These eight “most popular motions” can then be debated at the “national gathering”, but the vote is taken by “all members online”. But even that is not the last of the hurdles. A motion is only binding when “at least 40% of the membership have taken part in the vote”. Just to remind readers, based on Momentum’s current membership of 20,000, this is a requirement that some 8,000 members actively participate. Not very likely, given the level of commitment and engagement that these peripheral comrades have shown so far. So what happens to these “popular” motions that have failed to clear the 8k hurdle – as all of them surely will?

“If this threshold is not met but the motion has majority support of those who voted,” we are told, “it will serve as an advisory motion to the steering committee” (my emphasis).

The national committee has been disappeared in the Lansman draft. The SC is the only national committee name-checked, and it is proposed that this SC is made up of seven elected members, plus “one MP, one councillor and up to three representatives of affiliated trade unions”. And how exactly would the councillor, the MP and these three trade unionists be chosen and how would they be accountable to Momentum membership, we wonder?

Sprinkled throughout the document are proposals that indicate that Lansman and his supporters have, to a certain extent at least, been stung by the charges of bureaucratism and contempt for democracy that have rained down on their heads. For instance, the draft carries this absurd idea: “In addition to the above 12 members [of the SC], on a three-month rotational basis, three members of Momentum, drawn at random, will be invited to join the SC.”

This really is quite pathetic – a lame parody of genuine leadership accountability and transparency. (Each individual Momentum comrade – based on that 20k membership – has a 0.06% chance in any given year of ‘winning’.) Interestingly however, it does reveal a niggle in the mind of Lansman and co. This gimmick is meant to “discourage alienation of ‘expert’ leaders of the movement from ordinary members” and assumes that the lucky lottery winners will “at the conclusion of their term” go back as envoys for the SC “to share their experiences with others in the spirit of continuous self-improvement of the steering committee …”

The same type of flashy, flatulent empty noise is made about SC minutes, which have thus far been conspicuous by their absence. However, the Lansman draft now solemnly intones that

minutes of all … meetings will be published on line within 24 hours. Failure to publish these minutes within this time frame will void the membership of all members of the steering committee. New elections will be held that bar the current steering committee. This is to demonstrate the seriousness of the commitment to transparency.

This nuclear option has a failsafe, however: “Exceptional circumstances that [that the 24-hour deadline might be missed] must be signalled to a dedicated transparency officer who will launch an investigation as to why this has not occurred.”

This sort of crap is not worth the paper it is written on. The brutal truth is that at every stage the Lansman draft abounds with stipulations and proposed measures that blunt, negate and block democratic accountability and control from below within Momentum.

Supporters of the draft may protest that the proposals relating to the local Momentum branches contradicts this assessment. The document reads: “… local groups can organise as they see fit, so long as they don’t contravene Momentum’s democratically decided ethical statement and political statement.”

But it would be a big mistake to read this as an expression of a relaxed, democratic attitude to the basic structures of the organisation. In fact, it represents (1) a contemptuous attitude to these branches and the people who staff them; and (2) a conviction of Lansman’s that soon – if his proposals are accepted – he will not have to factor them at all into any considerations about how he runs ‘his’ Momentum.