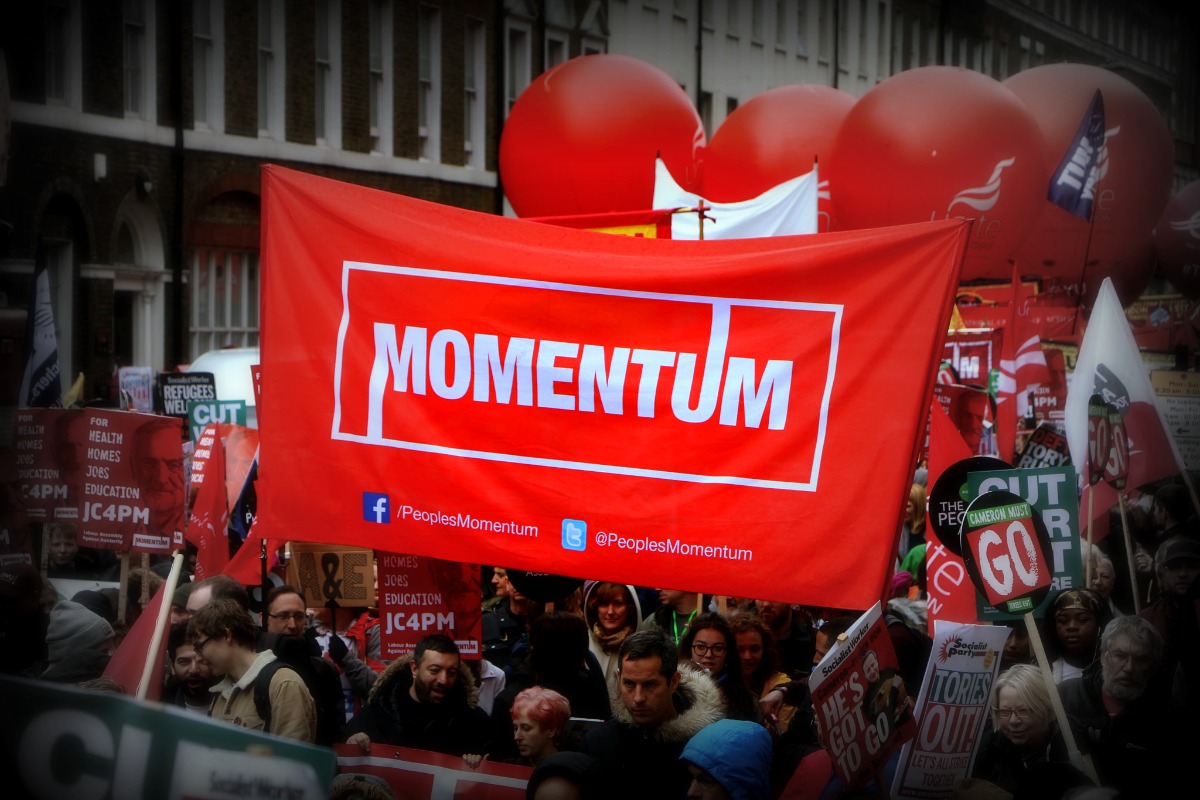 We all knew the Lansman coup was coming, says Carla Roberts. But now is the time for the left to take stock and organise

Once team Momentum announced its “online survey” of all members and supporters, the result was a forgone conclusion. In referendums the dictator gets to ask the question and, barring accidents, they get the result they want.

Not only were the questions loaded: they were also disgracefully backed up by Jeremy Corbyn, Clive Lewis and Diane Abbott. Topping it all it was the fact that team Momentum did the count … a wonderful opportunity to gerrymander.

So, with a victorious 80.6% voting for Omov, at a stroke the national committee, steering committee and regional committees were abolished. There will perhaps be a powerless ‘official’ Momentum conference … eventually (like the proposed November 5 national committee meeting, the February 18 conference has been cancelled – this time because of the by-elections in Stoke-on-Trent Central and Copeland). Moreover, everyone has to agree to Lansman’s constitution … or quit the organisation. They also have to be a member of the Labour Party by July 1 2017 or they will be “deemed to have resigned” (even though many have been already barred or expelled because of their activity in support of Jeremy Corbyn and Momentum).

Jon Lansman’s coup de grâce was a long time in coming … and, frankly, we are surprised it took him so long. Even though he has made his ally, Christine Shawcroft, a director of ‘Momentum Data (Services) Ltd’, he is still in charge of ‘Jeremy for Labour Ltd’. In other words, legal control of Momentum lies not with its membership nor its elected committees. No, it lies with its tiny group of shareholders (very capitalistic). Hence it is Jon Lansman’s hands on the databases and the funds. Effectively it is he too who appoints the full-timers who make up team Momentum.

However, not surprisingly, Momentum branches up and down the country have come out against Lansman’s January 10 coup. To date around 30 of them. Most Momentum activists are utterly appalled by the crass way in which all democratic decision-making bodies have been abolished and a new anti-democratic constitution imposed by Jon Lansman and his allies. But, as would be expected, there is huge confusion on how to best move forward.

On January 13, the (abolished) Conference Arrangements Committee released a statement (with the three Lansman allies on the committee not voting), according to which: “The CAC takes its direction from Momentum’s national committee, as per the original remit we were given. Until that body meets and informs us our role has changed, we will continue working towards Momentum’s first conference.” Brave talk … and, given Momentum’s original structure, perfectly legitimate.

A provisional date of March 11 for “the postponed conference” has been mooted. The statement rigidly sticks to the CAC’s initial brief, according to which the committee will accept only “one motion” from each branch and “one motion or constitutional amendment” from each region. The committee also told us that the national committee (majority) would meet, as previously planned, on January 28 in London.

The meeting will probably be a non-binding get-together. However, there are those who wanted to use it as a springboard for a full-scale split, with the national committee appointing a new steering committee, agreeing the date of a sovereign conference and demanding the transfer of funds and databases from Jon Lansman and his allies. Morally, this course would have been perfectly justifiable. After all, with the new constitution it is next to impossible to remove Lansman and his allies from their position of total domination.

However, it has become clear in recent weeks that very few Momentum members, let alone branches, are up for such a course. While there are countless expressions of outrage, there is also a heart-felt desire not to further divide the movement. So, for the moment at least, accept any anti-democratic outrage, any violation of basic principles.

There is naivety too. Some refuse to believe that Jeremy Corbyn, John McDonnell and Diane Abbott know what Lansman has done. Similar illusions existed in the Soviet Union at the height of Stalin’s purges.

There is also fear. A split in Momentum will give the bourgeois media a field day. Many worry that Ukip’s Paul Nuttall is set to win in Stoke. Jeremy Corbyn’s populist turn has not increased Labour’s poll standing. If Theresa May calls a snap general election this spring, we therefore face a wipe-out of 1931 proportions. Those who joined Momentum to support Corbyn and get him into No10 are almost in a panic. Hence the frantic calls for unity, not to rock the boat and the need to get rid of troublesome leftists who could embarrass Jeremy Corbyn by reminding the public of his former republican stance, his anti-imperialist campaigning and forthright opposition to Zionist Israel.

Hence the chances are that a split would only take a tiny minority of Momentum’s largely passive 20,000 members. However, the biggest problem for the opposition is its lack of solid politics and a clear perspective. The CAC was searching for some middle ground with Lansman. Its preferred constitution – drafted by Nick Wrack and Matt Wrack – had all the problems of Lansman’s: referendums, direct election of officers and mimicking student unions, trade unions and the Labour Party itself. By contrast we in LPM wanted Momentum to recognise that it was a faction united by its common politics and which, like the Fabians, ought to seek affiliation to the Labour Party.

Given the absence of a well-organised and politically principled left, the idea of challenging the Lansman coup head-on was never realistic. But that does not mean we should give up the fight for the hearts and minds of Momentum’s 20,000 or the 200,000 on its database. True, quite a number of people – for example, Nick Wrack – have talked about resigning or have already left Momentum. This level of frustration and impatience is understandable, but also short-sighted.

There has been a huge democratic deficit within Momentum right from the start. Ever since Corbyn won the leadership race he and his allies have had to improvise. Jon Lansman swopped his role as Corbyn’s campaign organiser for what became the Momentum brief. To begin with there was vague talk of grassroots control, involving wider protest movements and local campaigning. However, instead of channelling the huge enthusiasm generated by Corbyn’s success into a battle to transform the Labour Party, another, more conservative, course was chosen. The Labour Party right had to be conciliated … therefore Momentum has to be tightly controlled from above. Otherwise it would be demanding the automatic reselection of MPs (which was until very recently, the position of the Campaign for Labour Party Democracy, of which Corbyn and Lansman are members).

Of course, any organisation that cannot trust its membership is unlikely to be able to mobilise them … even as spear-carriers. The danger is that Momentum will soon become little more than an empty husk. But for now Labour Party Marxists will continue to work in Momentum while any life in it remains. We will do so with a view to spreading our vision of what Labour needs to be.

Demands for boycotting Momentum – crucially the elections to the new National Coordinating Group – are mistaken. There is no reason to impose isolation upon ourselves. Indeed we should use every opportunity, every avenue to spread the ideas of Marxism. That is why Stan Keable, secretary of LPM, is standing for the NCG, in the South East constituency.

But the same can be said of the post-1905 constitution of tsarist Russia. An autocratic monarch; rigged, indirect elections; seats reserved for the aristocracy and priesthood; and a stifling regime of censorship. Nevertheless, it was right for the Bolsheviks to stand in duma elections.

Of course, the left should organise and debate the road ahead. That can involve electing delegates from Momentum branches. But there should also be a conscious effort to involve the groups and fractions committed to working in the Labour Party: the Labour Representation Committee, Red Labour, The Clarion, Red Flag, Labour Party Socialist Network, Socialist Appeal and, of course, Labour Party Marxists.

So, no to a split, yes to Momentum opposition.