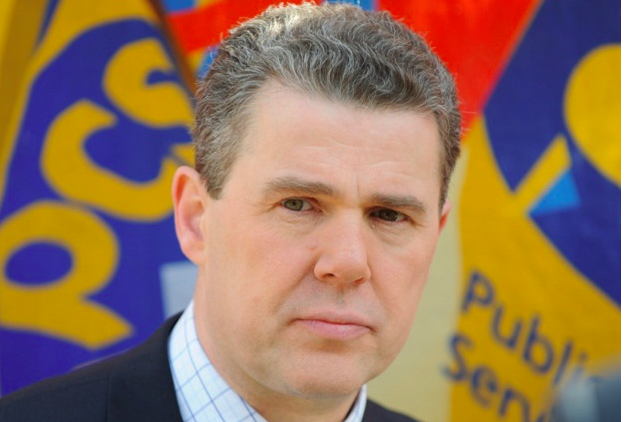 Carla Roberts and William Sarsfield of Labour Party Marxists spoke to Hudson Leigh, a leftwing delegate to the 2017 annual conference of the Public and Commercial Services union in Brighton (May 22-25)

With just two weeks to go before the general election, what was the mood at conference?

Delegates weren’t exactly buoyant, I have to say. I think that is a reflection of the savage cuts that the Tories have inflicted on the civil service. Tens of thousands of jobs have been cut, which means that branches are much smaller and are entitled to fewer delegates. To make matters worse, delegates now have to take annual leave to attend. Consequently, conference is getting smaller and smaller. And more boring.

With the exception of the debate on the Labour Party?

Well, yes, that hour on Wednesday afternoon was the most interesting 60 minutes at this year’s event.

Talk us through the three main motions dealing with the general election.

Motion 304 was moved by PCS general secretary Mark Serwotka – it was the NEC’s position. It states: “Conference believes that the worst possible outcome of this election … is another Tory government.” It stops short of recommending a vote for Labour Party candidates, but notes that “this election is very different” and that “for the first time in many years the leadership of the main party of opposition in Westminster, the Labour Party, is committed to ending austerity.” It asks conference to “step up campaigning” and to “use the final days of the election to urge members to get involved in PCS campaigns”. In effect, that is what the PCS has always done; so nothing new there.

Motion 305 was seconded by a supporter of the Alliance for Workers’ Liberty and Independent Left, and was also supported by the NEC at conference. This commits the leadership to “issue correspondence

to members highlighting how they would benefit from Labour’s manifesto commitment”. In effect, a general overview of the party’s policy positions and where they coincide with PCS policy.

Motion 328 was a different kettle of fish. It explicitly called on “members to vote Labour in England and Wales, and encourage members to get involved in their localities, where possible, to support such an outcome”. Motions from Sheffield and East London, which I supported, did not have that reference to England and Wales, which I think made huge concessions to nationalism in Scotland. But these motions were incorporated into 328 by the standing orders committee.

How did the debate and voting go?

First, I should say that there was some manipulative chairing of this session (or perhaps, if I’m less charitable, something worse). We had an hour to discuss this pivotal issue, but president Janice Godrich – who is a prominent member of the Socialist Party – made no attempt to draw out the arguments properly. She let the discussion on motion 304 drag on interminably. And that despite the fact that it did no more than restate long-standing PCS policy. As such – and given its deliberately vague formulations – it would have made no difference at all whether it had been voted through or not.

Motion 328, however, was dependent on motion 305 not getting majority support. It would have been fairer, in my view, to have a proper debate on the issue, which would have entailed all three different perspectives being properly moved and debated. But, with time running out, it became clear we would not get to hear motion 328 at all. As the realisation of this dawned on many delegates, its appears that a lot of them just settled for a vote in favour of 305, which pushes existing PCS policy a little further forward.

I’m not saying that motion 328 and blanket support for Labour Party candidates would necessarily have won – the NEC and Mark Serwotka carry a lot of weight – but now we’ll never know. We really should have been able to have that debate – no matter which individuals or political groups in the conference hall would have been made to feel uncomfortable.

The Socialist Party in England and Wales, which is highly influential in the union, is clearly disoriented. In the PCS they vote against supporting Labour outright. But the Trade Unionist and Socialist Coalition, which SPEW effectively runs, has just decided to support Labour Party candidates everywhere.

Unfortunately, Socialist Party members don’t identify their political affiliation and – what is even more frustrating – they don’t argue their politics openly: you have to read between the lines.

It seems to me pretty clear that it was the RMT’s decision to offer blanket support to Labour that by default decided the issue for the SP. The RMT is the only the serious union affiliate that Tusc has and in reality they call the shots in the organisation.

At January’s Tusc conference, the RMT were still insisting on only case- by-case support to Labour candidates and, as a result, the SP withdrew its suggestion to suspend Tusc’s electoral campaigning. They were even prepared to see the Socialist Workers Party walk out of Tusc over the issue in March. But, now the RMT has changed its view, the SP loyally follows suit.

This, presumably, is the model of what their ‘new workers’ party’ to replace Labour would be like – a lash-up where the trade union bureaucrats have the last word on everything! What’s the point of that?

But wouldn’t they call that tactical flexibility?

They can call it what they want. I call it a lack of principle.

What about the role of Mark Serwotka? He moved a successful motion last year, which instructed the NEC to review its relations with the Labour Party, “including the issue of affiliation”. He told the 2016 conference: “The debate about affiliation is one we should have next year. But we can’t be on the sidelines. It is members’ direct interests – their jobs, pay and pensions – to support [Corbyn] against the attacks from the right wing of the Labour Party.”

Given the lack of transparency in the union, it’s hard to know what happened on the NEC. Why was this important issue quietly dropped? I don’t know. We can speculate about deals with, and pressure from, the Socialist Party members on the NEC, who are still against affiliation to Labour. But, given the fact that the SP has a lack of confidence in openness much of the time, it has to remain speculation for the time being.

Of course, it also has to be said that no branch moved a motion for affiliation. It just shows how painfully weak the left is.