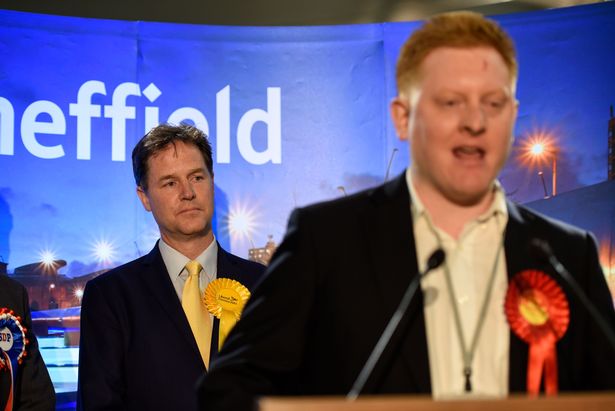 One the greatest upsets of the election took place in Sheffield Hallam, where a pro-Corbyn candidate defeated Nick Clegg. Carla Roberts of Labour Party Marxists reports

original article was updated on June 15 2017

Sheffield Hallam is one of the richest constituencies in the country and had never previously been in Labour hands. 1)https://en.wikipedia.org/wiki/Sheffield_Hallam_(UK_Parliament_constituency) Yet on June 8 Labour’s Jared O’Mara, a member of Momentum, defeated former Liberal Democrat leader Nick Clegg.

Oddly enough, it was also an upset for the regional Labour Party too. The campaign was underfunded, understaffed and would have not have got off the ground without the help of local Momentum supporters. No cash was allocated from the regional party office for Hallam’s campaign, and so the entire £4,000 spent (compared to the maximum of £12,000 per constituency) was raised locally. This leaves Hallam rather short financially, especially when it comes to sending delegates to annual conference in September.

Was this just the result of the defensive campaign run by the Labour HQ – an effort to protect Labour seats rather than take the fight to the Tories? That is what is being argued now. But The Skwawkbox reports similar underfunding problems in other parts of the country2)https://skwawkbox.org/2017/06/12/proof-labour-hq-funnelled-resources-away-from-pro-corbyn-marginals – including in areas with marginal Labour seats held by leftwingers, such as Wirral West.

But how come any leftwingers were chosen to contest in this election in the first place? We know that candidates were selected in backroom deals between Corbyn’s people and the national executive. But the allocation of funds, resources and manpower is organised via regional Labour Parties – ie, full-timers appointed by general secretary Iain McNicol and co.

It seems to us that what happened in Hallam has indeed been part of an organised, Britain-wide attempt by Labour HQ to undermine Jeremy Corbyn, prop up the vote of rightwing MPs – and accept that marginal seats with leftwing candidates would be lost. If that is indeed the case – and the evidence is mounting up – then heads must now roll: McNicol must go.

Sheffield Hallam was not identified as a marginal that would be worth fighting for. The regional Labour Party – no doubt under instruction from Labour HQ – had decided that all fire should be concentrated on supporting the rightwing Progress supporter, Angela Smith (who has called for Corbyn’s resignation many times and will undoubtedly do so again3)www.youtube.com/watch?v=EtVoeTOAp2U), in Penistone and Stocksbridge constituency to the north of the city and directed volunteers from across the other five Sheffield constituencies to that area. Hallam was effectively written off, despite the fact that in 2015 Nick Clegg only won the seat with a margin of just over 2,500 votes.

Jared O’Mara has a very low profile, to put it mildly.4)https://en.wikipedia.org/wiki/Jared_O%27Mara He is a disability campaigner with cerebral palsy, has run twice – unsuccessfully – for the local council and is treasurer of the small Sheffield City Labour Party branch. In effect he was regarded as a mere paper candidate.

But, once local Momentum members and others on the Labour left heard that a fellow Corbyn supporter had been selected as the candidate, they pulled out all the stops to make it a successful campaign. It was an uphill struggle against the Labour bureaucracy: for days after the election was called there were no leaflets, no web presence and hardly any official support for the campaign. Residents in Hallam were bombarded with one glossy, pre-produced Lib Dem leaflet after the next, while the scruffy black and white numbers produced for Jared looked like something the cat had dragged in. Large areas of Hallam were entirely left out of the ‘campaign plan’ and no effort was made to leaflet or canvass there.

At times, almost a parallel campaign had to be organised, bypassing official Labour structures. Sometimes it felt as though the bureaucracy was hell-bent on sabotaging things. Right until the end, even volunteers from Hallam itself were encouraged to campaign for Angela Smith. Campaigners were told not to drive around with a megaphone, not to produce specific leaflets to hand out outside schools and not to organise any public meetings or even a fundraising event. But leftwingers in Hallam did most of those things anyway and some were eventually adopted by the campaign.

The left really started to get its act together at a crucial CLP campaign meeting a week after the election was called. Over a hundred people turned up and it became clear that a majority was not happy with the official mantra being put out by most of the local leadership that ‘Hallam could not be won’. Momentum supporters and other leftwingers in the meeting disagreed and encouraged others to at least try and run a campaign to win the seat.

The ball really got rolling when Momentum organised a canvassing training session in Hallam at the beginning of May with a campaigner from Bernie Sanders’ team. For three hours the importance of actually talking to people was discussed, to try and convince them to vote for Labour. That sounds like an obvious thing to do, but the official election agent – who came along for a Q&A and to hand out material for the first canvassing session of the campaign – insisted that “everybody has to stick to the script”. Of course, the so-called national “script” consists of nothing more than asking people on the doorstep which party they will vote for and which one they voted for last time. This is called ‘voter ID’ – a hangover from the Blair years which needs to be got rid off.

Clearly, if you want to build a real party of the working class, then speaking to people is a pretty basic necessity. Momentum’s fact sheet provided people with arguments to take on the Liberal Democrats over their U-turn on tuition fees, their responsibility for austerity – as well as their role in privatising a lot of services across Sheffield, when they were the largest party in the local council. Luckily, most people ignored the ‘advice’ of the agent to stick to the script and left the training session enthused and equipped with some useful ‘persuasion techniques’. The video is now online.5)www.youtube.com/watch?v=TpOfgUIzjxg&t=180s

After that, the left continued to organise, mainly via email and Facebook (all Labour Party meetings were, of course, suspended). It took some effort to convince other lefties from across Sheffield to come to Hallam. Incredibly, many of them had followed the Labour HQ instructions and went to campaign for Angela Smith. But many of them eventually joined us in Hallam and on polling day more than 200 people crammed into the campaign headquarters.

There was an incredible buzz on June 8. Campaigners drove around Hallam in a decorated car with a megaphone, playing ‘Liar, liar’ and ‘The magic money tree’, and calling on people to vote Labour. Groups of teenagers waved back and shouted ‘Vote Labour!’, while passing drivers raised their fists in support. Campaigners started to believe they could actually win the seat – although it still came as a shock to many when the result came through. The story goes that Jared was so convinced he would come second that he had to shoot off in the middle of a night to a nearby 24-hour Tesco to buy himself a new suit for his acceptance speech! Alas, we can reveal that this is not true: he was wearing his dad’s jacket and a black pair of jeans.

Despite our well-known criticism of the Lansman coup in Momentum6)http://labourpartymarxists.org.uk/yes-to-a-momentum-opposition-no-to-a-split, I have to admit that Momentum nationally was most helpful. Once they were informed by local members that Hallam was indeed a marginal seat – and one contested by a pro-Corbyn candidate – they really pushed for Momentum supporters across the area to come out and help (and surprisingly went against the instructions of the local Labour Party). Local Momentum supporters from across Sheffield report receiving several phone calls and text messages urging them to get involved.

In that sense, Jared O’Mara really is Momentum’s first MP. Can you imagine what kind of impact an organisation like Momentum could make it if it were a democratic, members-led campaign? But I am not sure Momentum is up for doing what is now necessary: helping to get rid of the saboteurs in the Labour Party – and not just in Sheffield Hallam.