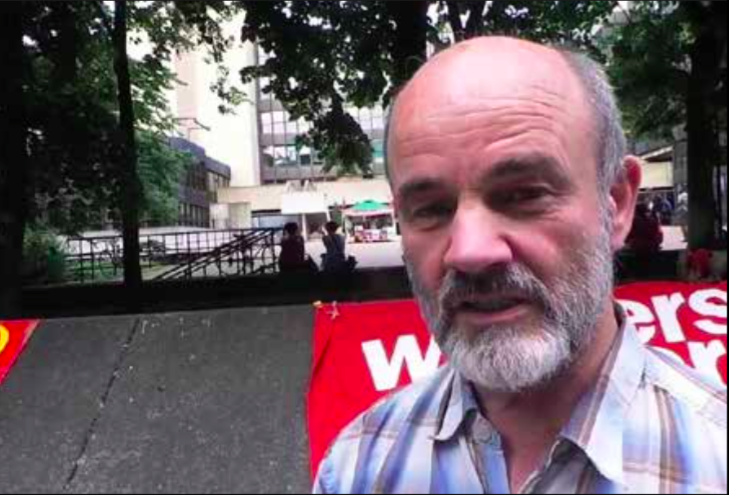 Stan Keable was expelled last week from the Labour Party because of his association with Labour Party Marxists, of which he is secretary. This is his reply to Labour’s head of disputes

In reply to your October 2 email, and the attached letter and “evidence”, I am writing for the following purposes.

1. To reject the false and malicious allegation against Labour Party Marxists and against myself, by persons unnamed, of anti-Semitism, and to challenge the validity of the so-called “evidence” supplied, in that it in no way substantiates that allegation.

2. To reject your assertion that the “expressed aims and principles” of Labour Party Marxists, of which I am secretary, are “incompatible” with membership of the Labour Party, and to challenge the validity of the so-called “evidence” supplied, in that it in no way substantiates that assertion.

4. To demand the immediate rejection of the allegation of anti-Semitism as unfounded, because (a) the “evidence” provided transparently fails to substantiate the allegation: ie, there is no case to answer; and (b) because the allegation is obviously a continuation of the malicious rightwing smear campaign, promoted by the Israeli state, which maliciously brands as anti-Semitic all criticism of the politics of Zionism and all opposition to Israel’s apartheid-type laws and ongoing settler-colonisation of Palestinian land; and (c) because the ready acceptance by the governance and legal unit of such obviously malicious allegations brings the Labour Party into disrepute.

5. To demand the immediate withdrawal of your decision to end my Labour Party membership as an invalid decision, because (a) no case has been made to substantiate your bald assertion of “incompatibility” between the aims of LPM and the aims of the Labour Party; (b) contrary to natural justice, no right of appeal has been offered (only the right to “challenge the validity of the evidence”); (c) instant dismissal from membership without due process brings the Labour Party into disrepute.

The so-called “evidence” attached to your letter consists of published materials which contain not one iota of anything which can reasonably be construed as anti-Semitism, or as “incompatible” with Labour Party membership. Indeed you have not indicated any words, phrases or statements in the “evidence” which might substantiate the allegation of anti-Semitism or the claim of incompatibility with Labour Party membership. In short, there is no case to answer.

As a lifelong communist and internationalist, anti-imperialist and anti-racist, I find the charge of anti-Semitism risible. As a child I was proud to hear my parents’ anecdotes of how, in the 1930s, they formed part of the ‘underground railroad’ in east London, giving refuge in their home to illegal Jewish and socialist refugees escaping from Nazi persecution in Germany. In the 1960s I was proud of my brother’s courageous role when he risked everything to carry ANC propaganda material into apartheid South Africa as one of Ronnie Kasrils’ London Recruits.

The ‘anti-Semitism’ smear campaign, using the contrived definition concocted by the International Holocaust Memorial Alliance, and maliciously alleging anti-Jewish racism where none exists, is designed to deflect criticism of Israel and its role as US imperialism’s chief ally and collaborator in the Middle East. Its conflation of anti-Zionism with anti-Semitism misuses anti-racist sentiment to protect the real racism of the Israeli state against Palestinian Arabs. Complicity with Israel’s anti-Semitism smear campaign brings the Labour Party into disrepute.

Labour Party Marxists does not consider the existing rules of the Labour Party, including the existing version of clause four, to be written in stone. We very much welcome the establishment of the democracy commission and the opportunity to engage with others aiming to change the rules for the better. The existing 1994 Blairite version of clause four, which you baldly assert is “incompatible” with the LPM’s aims and principles, is itself the product of several revisions since the adoption of the original version in 1918.

Discussion of further proposed changes does not constitute “incompatibility” with party membership. Indeed, the Campaign for Labour Party Democracy at its 2017 AGM set up a working group (of which I am a member) to draft a rule change proposal for a revised, 21st century, socialist clause four.

LPM was launched by a group of Labour Party members in 2011, following Labour’s 2010 general election defeat, in response to the invitation by Peter Hain, then chair of the national policy forum, to members and party units to submit their views on his consultation paper, ‘Refounding Labour – a party for the new generation’. Our submission to the consultation, ‘Refound Labour as a real party of labour’, was duly submitted, and published in Labour Party Marxists No1 (autumn 2011), which also includes our ‘Aims and principles’. It is still available on the LPM website. Peter Hain thanked us for our contribution, and, of course, no question of our ‘Aims and principles’ breaching the rules was raised then or since. It is unreasonable to do so now.

Your October 2 letter quotes rule 2.1.4.B in support of your assertion of “incompatibility”.

The first criterion in this rule is so arbitrary that its selective use to expel members of LPM or any individual would amount to unfair and malicious political discrimination. Your interpretation of the rule is clearly mistaken. Do you really propose to expel all members who support “a political organisation other than an official Labour group or unit of the party”? That would mean expelling, for example, all members of Progress, Labour First, Compass, Campaign for Labour Party Democracy, Labour Representation Committee and Momentum, to name just a few.

The second criterion for exclusion from membership in this rule – “supporting any candidate who stands against an official Labour candidate” – does not apply to LPM. On the contrary, LPM has a record of criticising those left groups which do so, such as the Trade Unionist and Socialist Coalition.

LPM believes that the Labour Party will be greatly strengthened not by McCarthyite red-baiting to exclude Marxists and socialists unacceptable to Labour’s right wing, but by winning the allegiance of all socialists and campaigning for the affiliation to Labour of all socialist groups and all trade unions, and making the party – in the words of Keir Hardie – “a great movement for socialism”.