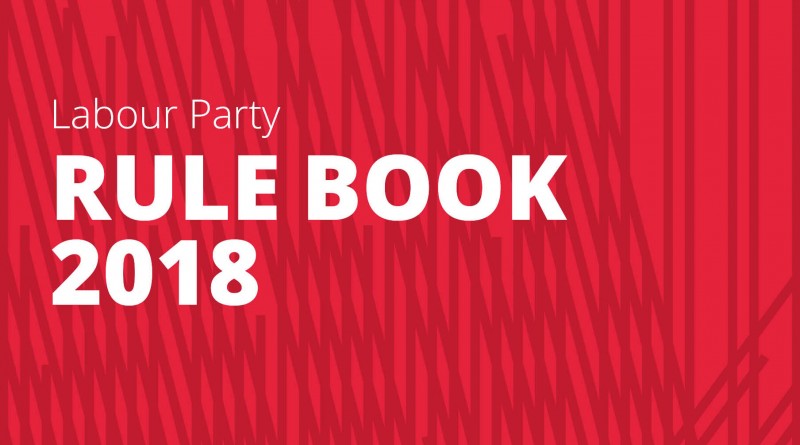 We really wish we could use this article to recommend a vote for the rule change moved by International Labour in favour of open selection. Unfortunately, due to the betrayal and manoeuvring by Unite leader Len McCluskey and Momentum owner Jon Lansman on Sunday, delegates will not be able to vote for the mandatory reselection of all Labour’s parliamentary candidates.

We believe that this was not just incredibly undemocratic, as the vast majority of CLP conference delegates clearly expressed their desire to have an open and fair discussion on the different options (most of them were no doubt in favour of mandatory reselection). It was also incredibly inept from a tactical point of view. If Labour wins the next general election, members of the rightwing PLP  have demonstrated that they will not subordinate themselves to Jeremy Corbyn. They will make his life hell at every opportunity. They are very likely to launch another no-confidence vote against him – he will, in effect, be unable to govern. The only way to avoid that, of course, is through such measures as mandatory reselection to get rid of the plotters and saboteurs.

While most NEC rule changes coming out of the gutted Party Democracy Review were voted through with a majority of well over 90%, the two disputed – sections 6 (leadership elections) and 8 (selection of parliamentary candidates) – received much lower votes: 63.94% and 65.94% respectively. Taking into account the massive size of the trade union bloc vote – which makes up 50% of the total – this means that the vast majority of CLP delegates rejected the NEC’s proposals on these two issues. This clearly represents a massive democratic deficit. And, owing to the undemocratic three-year-rule, this now also means that both issues cannot be revisited until 2021.

18 of the 33 submitted CLP constitutional amendments have been taken off today’s agenda because of the NEC’s rule changes – without any proper debate on most of them. To make matters worse, some of the NEC’s changes do not actually deal with the substance of the original CLP proposals and in our view the conference arrangements committee (CAC) was wrong to declare that they were ‘consequentials’ and would thereby automatically fall. For example:

–   Sefton Central CLP proposed that the members of the powerful National Constitutional Committee should be elected directly by all Labour Party members. The NCC is incredibly important in the ongoing civil war. This is where the NEC sends all disciplinary cases it does not want to deal with itself. Ideally, it should be abolished. But, seeing as this was not an option, we agreed with this rule change, which would have taken away the right of the affiliates to choose who should judge over party members. The NEC’s amendment, which increased the size of the committee from 11 to 25, does not specify at all how the members should be elected. This will guarantee that the right will continue to dominate disciplinary matters in the party.

–   The current period following an expulsion or auto-exclusion of a member is currently set at a fixed “minimum of five years”. The amendment by Bracknell CLP would have given the NEC the right to choose a shorter period. There would still have been unfair and unjust expulsions, but it would have been slightly better than the status quo. Again, the NEC’s rule changes do not deal with this point at all – but delegates will still not be able to discuss the proposed change, as it has been deemed ‘superseded’.

After removing these excluded ‘consequentials’, we believe that the following rule changes remain on the agenda to be discussed today.

Mid Worcestershire et al demand an important change to  the rule book’s “conditions of membership”. They propose to delete this half-sentence: “joins and/or supports a political organisation other than an official Labour group or other unit of the Party, or”

Our reason: This rule had not been used for decades – until the election of a certain Jeremy Corbyn to leader of the Labour Party, that is. Since 2015 though, it has been liberally applied to “auto-exclude” dozens of supporters and alleged supporters of Socialist Appeal, the Alliance for Workers’ Liberty and Labour Party Marxists – many of whom had been active Labour members for many, many years. It was, for example, used to expel professor Moshé Machover after an article of his was published by Labour Party Marxists, which was handed out at last year’s Labour Party conference (he has since been reinstated after an international outcry). It has also been used to auto-exclude people who have merely shared articles online published by the three organisations.

Members of Progress or Labour First – clearly very highly organised factions in the Labour Party – remain untouched. To be applied consistent, the party would also have to expel supporters of the Stop the War Coalition or the Campaign for Nuclear Disarmament. But, of course, it has exclusively been used against the organised left in the party. It is a McCarthyite, anti-democratic rule that must go.

Broxtowe CLP proposes (in the same section) that only a party member who “joins and/or supports a political organisationthat is in conflict with the aims and principles of the Labour Party” should be ineligible for party membership (amendment in italics).

Our reason: This proposal begs the question as to how on earth you prove that the aims of an organisation are not“in conflict” with those of the Labour Party. This formulation has been used, for example, to expel supporters of Socialist Appeal, because they self-define as Marxist. The CND clearly wants to abolish all nuclear weapons; while Jeremy Corbyn is prepared to rearm Trident – incompatible, surely?

Our reason: The rule book already states that, “at least every second delegate from a CLP shall be a woman”. While we encourage the participation of women at all levels of the party, this rule effectively punishes the CLP if it cannot find enough female volunteers. It seems to us that this is a pseudo-democratic, unnecessary addition that makes the rule book even more unwieldy than it already is.

Our reason: This is sorely lacking at present. While each morning delegates and visitors wade through the huge pile of papers, composited motions and votes cast the previous day, the CAC plays hard and fast with conference standing orders (many of which are not written down anywhere). It has a huge amount of power. It can decide, for example, if there should be a show of hands or a card vote.

The unions and other affiliates have around 300 delegates at conference, while the CLPs have about 1,200. But in a card vote the affiliates count for 50% of the total vote; ditto the CLPs (whose vote then further divided according to how many members it has). Roughly, a union delegate’s vote counts for four times as much as that of a CLP delegate – and that can make all the difference in a dispute.

Blackley & Broughton et al insist that rule changes should be heard in the same year they are submitted.

Our reason: The practice currently employed is actually not part of the rule book. It delays debate of constitutional amendments to the following year. An utterly unnecessary block on the democratic will of Labour Party members. Apparently, this was also discussed as part of the Democracy Review, but rejected by Katy Clark.

Our reason:We have sympathy for this rule change, which is clearly designed to curb the power of Tom Watson. But we are in favour of doing away with the position of deputy leader altogether. Incidentally, we are also in favour of abolishing the position of leader, as there are serious issues of how members can effectively hold to account somebody in such a strong position.

Our reason: as above.

Kingswood proposes to abolish the category of registered supporters.

Our reason: We are against the Americanisation of politics; only members should have a vote. Supporters actually made no difference to the outcome of the leadership elections.

Our reason: We also have a lot of sympathy for this rule change, which has no doubt been inspired by the disastrous reign of Iain McNicol. He had to be bribed out of his job after undermining Jeremy Corbyn for two long years, during which he was responsible for facilitating the witch-hunt against thousands of Corbyn supporters, creating the hostile and fearful atmosphere we can still feel today.

Currently, the GS is elected at conference “at the recommendation of the NEC” and usually stays in the job until s/he dies or retires. We therefore welcome the fact that this rule change seeks to give the NEC the clear power to sack the GS, because that is clearly missing from the current rules. However, this also creates a certain democratic deficit: all party members can vote for the GS, but s/he could then be sacked by the NEC.

In our view, it would make more sense for the GS to be truly accountable to the NEC by being elected by this body too: it is, after all, the NEC that the GS is supposed to serve.

We also disagree with limiting the term to three years. If the person is doing a great job, why get rid of him or her? On the other hand, if s/he is terrible, s/he can be sacked straightaway anyway. There is no point to this limit.

New Forest East as above, but instead of a maximum term of three years, it proposes five years.

Our reason: See above.

Swansea West proposes to elect the leader and deputy leader of Welsh Labour via an OMOV election.

Our reason: Again, we have a lot of sympathy with the motives behind this proposed rule change: a truly undemocratic, weighted electoral college, adopted only recently by the Welsh executive committee, has led to the election of Carolyn Harris MP, who is deeply unpopular among individual members (but was favoured by the unions and elected representatives). But if there has to be a position of ‘leader’ – a position we think should be abolished – we would prefer this person to be elected by the (democratically chosen) Welsh/Scottish executive directly. After all, s/he is supposed to be accountable to and recallable by that body.

Dartford wants to double the number of NEC reps elected by councillors, mayors and police commissioners.

Our reason: Instead of doubling the figure from two to four, these NEC positions should be abolished altogether.

Richmond Park proposes that CLPs should be able to decide themselves if they want to stand in a general election.

Our reason: We presume that this rule change comes from the right and has been moved by people wanting to withdraw a Labour candidate in favour of Tory billionaire Zac Goldsmith, who was standing as an ‘independent’ in a by-election in 2016.

Nevertheless, it is entirely correct that local members should have the right to decide not just who they want as their candidate – but also if they even want to stand somebody. In the past, local Labour Parties stood down in order to support a candidate from the Communist Party, for example.

Cheltenham wants CLPs without a Labour MP to decide on a candidate within six months of the last election.

Our reason: Is it really useful to have somebody in this position for over four and a half years? This rule change would not allow for the person to be replaced (unless they withdrew).

City of Durham wants to replace Local Campaign Forums with Local Government Committees, in which 75% of its members would be CLP delegates.

Our reason: The current LCFs clearly need radical reforming: They are dominated by councillors and party officials and are little more than toothless debating chambers. They used to write the Labour group’s manifesto, but this has long been outsourced to the councillors themselves. We would prefer a much more thoroughgoing reform of this body. 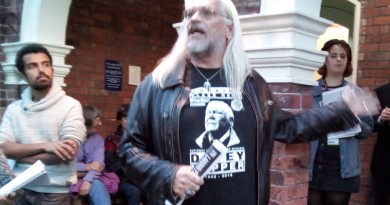 September 23, 2017 Comments Off on Tosh McDonald clutching a copy of Labour Party Marxists 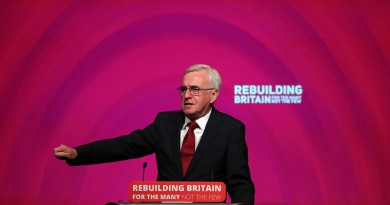 John McDonnell’s 10% shares plan: There is no ethical capitalism

September 26, 2018 Comments Off on John McDonnell’s 10% shares plan: There is no ethical capitalism