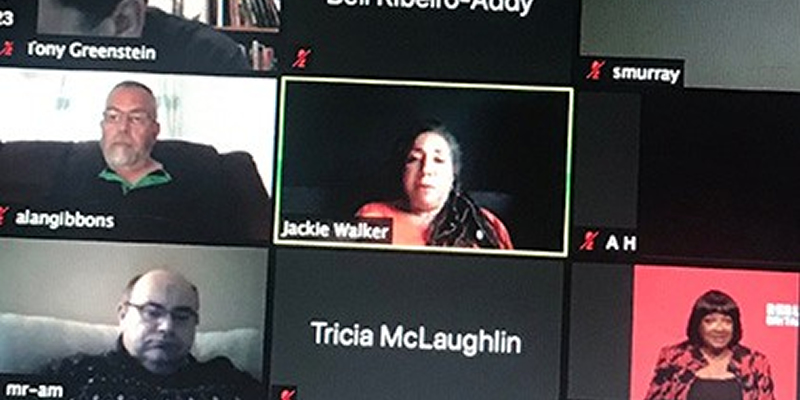 Those who fail to show solidarity should not be given solidarity, writes David Shearer of Labour Party Marxists

While Jeremy Corbyn was still Labour leader, there was much speculation on the left that, once the right had managed to remove him and recapture the party, we would see an abrupt end to the weaponisation of anti-Semitism. That was, of course, a campaign that saw the Labour left, and Corbyn supporters in particular, absurdly targeted as ‘anti-Semites’ and the party itself accused of having become ‘institutionally anti-Semitic’.

Well, I think the events of last week might have knocked that one on the head. For those who have missed this story – relegated, of course, to the inside pages, thanks to the coronavirus pandemic – the latest ‘scandal’ occurred as a result of the April 29 online meeting of a new Labour left grouping called ‘Don’t Leave, Organise’, which was set up following the election of Keir Starmer as the party’s new (rightwing) leader.

Attended by over 500 people, the meeting was addressed by, amongst others, two Labour left MPs, Diane Abbott and Bell Ribeiro-Addy. As you might expect, their contributions focused on the recent leaked report, which revealed how the rightwing Labour bureaucracy under former general secretary Iain McNicol had not only deliberately worked to reduce the possibility of a Labour general election victory, but had sat on allegations of anti-Semitism in order to undermine Corbyn.

The big problem with this line involves the second allegation, which actually takes it as a given that there is indeed a serious problem with anti-Jewish prejudice within the party. In this way the soft Labour left, including our two MPs, has attempted to turn the tables. There is not only anti-Semitic racism: there is ‘institutional racism’ in general (both MPs are black, of course). Much discussion ensued about black self-organisation.

But they obviously had not reckoned on the presence of spies. A well orchestrated scandal followed. Its focus was not on what they (or anyone else) said at the meeting, but on the fact that among the dozen or so people called to speak from the audience there were two expelled Labour members: namely Jackie Walker and Tony Greenstein. In case you have forgotten, both these comrades were originally suspended over allegations of ‘anti-Semitism’ (despite the fact that both are Jewish!), but were eventually booted out over totally different charges – I will return to that below.

The next day, following well crafted denunciations from several Zionist groups, the story went live. The BBC version (April 30) was headlined: ‘Sir Keir Starmer is facing calls from Jewish groups to take further action over two MPs who addressed a meeting that included two expelled activists’. Of course, terms like ‘Jewish groups’ are used to imply that they speak on behalf of the ‘Jewish community’. In reality there is a strong anti-Zionist current among Jewish people. For example, one of the founding organisations of Don’t Leave, Organise is the anti-Zionist Jewish Voice for Labour (the others being the Labour Representation Committee and Red Labour, Red Britain).

So what did the Zionists allege? Well, the Board of Deputies of British Jews claimed that the MPs had ‘shared a platform’ with the two expellees. According to BoD president Marie van der Zyl, “It is completely unacceptable that Labour MPs, and even ordinary members, should be sharing platforms with those that have been expelled from the party for anti-Semitism.”

Of course, the term, ‘share a platform’, usually refers only to an event’s official speakers, not to people in the audience. But that does not bother van der Zyl, of course (nor the fact that comrades Walker and Greenstein were not “expelled from the party for anti-Semitism”). She demanded that Keir Starmer take “swift and decisive action” against Abbott and Ribeiro-Addy in order to demonstrate that “this is a new era, rather than a false dawn” following his pledge after the leadership election to “tear out this poison by its roots”, as Labour had “failed the Jewish community on anti-Semitism”.

Then there was Euan Philipps of Labour Against Anti-Semitism, who said that Starmer should have given a “strong and unequivocal response” following this ‘outrage’ of the MPs addressing a meeting where a couple of expelled members were present. Starmer, he said, had instead “demonstrated a disappointing level of moral and political cowardice” in not removing the whip from them. For his part, Gideon Falter of the Campaign Against Anti-Semitism said the Labour leader had shown that “his apologies are meaningless” because of his failure to take stronger action: “After half a decade of the Labour anti-Semitism crisis,” said Falter, “no MP should need ‘reminding’ not to engage with those expelled from the party over anti-Semitism.”

A Labour spokeswoman said Abbott and Ribeiro-Addy had been “reminded of their responsibilities” and had been spoken to “in the strongest possible terms”. After all, “The previous comments made by some of the individuals” attending the meeting had been “completely unacceptable”.

So how did the two respond? Disgracefully, they issued a grovelling statement which said: “The MPs were not aware that any suspended or expelled former members of the Labour Party might contribute as audience members. They did not and would not share a platform with them.”

This is appalling on so many levels. First, would you not expect that out of the 500-plus there would be all sorts of different people, some of whom might express views you totally disagreed with? Secondly, what is wrong with debating with such people – even if they had been expelled from Labour for legitimate reasons? Which brings me to my third, and most important, point: by taking this disgraceful stance Abbott and Ribeiro-Addy were placing themselves firmly in the camp of the witch-hunters and thus aiding the right, not to mention the anti-Labour establishment.

In fact neither Tony Greenstein nor Jackie Walker had done or said anything remotely anti-Semitic and the disciplinary action taken against them was completely unjustified. The initial moves against comrade Greenstein had seemed to centre – at least in terms of what was alleged publicly – on the fact that he had used the term ‘Zio’ as an abbreviation for ‘Zionist’ on social media. So shortening the word in this way completely changes its meaning, does it? Perhaps any such usage (like ‘bio’ or ‘eco’) is unacceptable.

Secondly, comrade Greenstein was also accused of describing the rightwing Labour MP, Louise Ellman, as an “apologist for Israel’s occupation forces” and a “supporter of Israeli child abuse” (the latter because she had praised the actions of Israeli soldiers, even though amongst those they had violently arrested were children). Ellman, of course, later resigned when faced with a no confidence motion in her Constituency Labour Party.

But comrade Greenstein was expelled in February 2018 – basically for ‘being rude’.

What were comrade Walker’s ‘crimes’? In 2016 she was suspended after a private email she had sent was “uncovered” by the Israel Advocacy Movement (the name says it all). In this she pointed out that Holocaust Remembrance Day focussed almost exclusively on Jewish victims of genocide. But what about the thousands of Africans who had been enslaved and died on the other side of the Atlantic? She had (rather clumsily) pointed to the fact that in the slave trade some Jews, far from being the victims, were in fact among the slave-owners. She wrote in the email: “… many Jews (my ancestors too) were the chief financiers of the sugar and slave trade”. She later said that what she had meant was: “Jews (my ancestors too) were among those who financed the sugar and slave trade.”

Eventually comrade Walker was reinstated, but was suspended again a few months later for comments she made at an “anti-Semitism training event” organised by the Jewish Labour Movement at the 2016 Labour conference. Not only did she say, “I still haven’t heard a definition of anti-Semitism that I can work with.” But she also queried the need for special security at Jewish schools. Presumably such remarks constitute “prejudicial and grossly detrimental behaviour against the party” – the ‘offence’ for which she was finally expelled in March 2019.

What was the stance of Abbott and Ribeiro-Addy in relation to such cases? Like Corbyn himself, they said and did nothing. After all, if you say that such disciplinary action is misplaced then you yourself might be targeted next. Better to go along with the action taken and pretend it was all justified. That was what they effectively did once again last week.

That is why we totally disagree with the headline above the statement issued by Labour Against the Witchhunt, which reads: “Solidarity with Diane Abbott and Bell Ribeiro-Addy” (although at least it adds: “and all those unjustly expelled!”). LAW failed to criticise ‘comrades’ Abbott and Ribeiro-Addy,’ despite their disgraceful statement issued two days earlier.

Solidarity means – if it means anything – unity, agreement, common action and mutual support. Calling for solidarity with scabs, turncoats and traitors is, to say the least, to foster illusions, to throw dust into the eyes of Labour members. We should defend Abbott and Ribeiro-Addy from any attempt to discipline, suspend or expel them. But their surrender, their cowardice, is inexcusable. And that needs saying.

While we are on the subject of solidarity, it is worth a brief comment on the May 2 ‘Statement on Salma Yaqoob’ issued by the Stop the War Coalition. Yaqoob is another Labour member facing an investigation following a complaint by the Campaign Against Anti-Semitism. That despite her long record of fighting racism and other forms of prejudice. The STWC states: “The Campaign Against Anti-Semitism demanded the exclusion from Labour of two black women MPs, Diane Abbott and Bell Ribeiro-Addy, on the flimsy pretext that they addressed an online meeting which included expelled Labour Party members in the audience, not on the platform” (original emphasis).

But then it added: “Local STWC groups act autonomously in deciding their platforms, but we note that Tony Greenstein has never been asked to address a national STWC meeting. STWC rejects both anti-Semitism and abusive language in political debate.”

So, unlike Salma Yaqoob, comrade Greenstein was justifiably expelled, was he? That seems to be the implication.