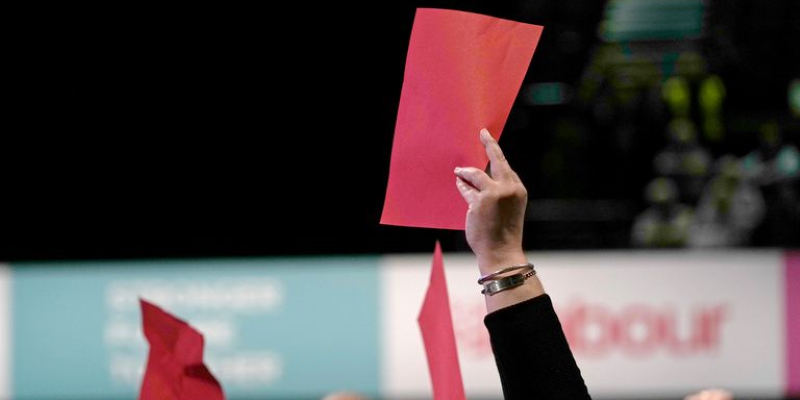 Where to go from here? That was the question facing the Labour left – not least those comrades expelled or anticipating imminent expulsion.

While conference itself was taken up with media-pleasing displays by shadow ministers and crude attempts to stifle the rank and file by session chairs, a whole series of events on the fringe at least provided space for debate. There were also fringe hubs, the most important being the Resist event at the Rialto, supported by groups such as Labour Left Alliance, Labour Against the Witchhunt and Labour Party Marxists. And, of course, there was Momentum’s World Transformed.

The damage inflicted on the Labour left by the witch-hunt was on display at the Defend the Left rally on September 27. In the same large venue in 2019 there had been standing room only, but the numbers for 2021, while not embarrassingly low, were significantly down. Starting her contribution, Jackie Walker urged us to look at the empty seats. “People are terrified to come,” comrade Walker said. “The venue of this meeting could not be revealed in any normal way … Previous meetings of this kind have been the targets of the threats to bomb, threats to kill …”

This is no surprise, of course. The right of the party – in concert with their allies in the venal mainstream media – has bullied and battered the left. Ironically this was facilitated by the timidity of Corbyn and his close advisors, even to the extent of throwing their own comrades onto the flames of the ‘anti-Zionism equals anti-Semitism’ big lie.

So, it was encouraging that a good number of comrades attended in defiance of the threats, both official and unofficial. Also, there seems to be an admission from comrades – including from the top table – that there needs to be a frank debate about the “errors” (!) made by the leadership of the Labour left.

Tina Werkmann, chair of Labour Against the Witchhunt, argued that “the situation before this conference was pretty bad; after it is a lot worse”. She claimed that the last few months have seen “the biggest attack on the left in the labour movement for decades, if not ever”. Hyperbole, surely.

The refusal to accept communist affiliation in 1921 and the subsequent banning of CLP’s supporting CPGB members as Labour parliamentary candidates, the expulsion of thousands, the closing of the London Labour Party were pretty big attacks on the left. More to the point: the anti-communist witch-hunt put an end to the Labour Party as a united front of the working class. A historic defeat from which we have yet to recover.

Comrade Werkmann warned against simply regarding “what is happening in the party in isolation” and linked attacks on free speech to the “massive efforts of the international ruling class to punish Julian Assange and other whistle-blowers” – desperate initiatives to bolster a “system in decline”. But “unfortunately it’s working”, she bluntly stated, citing the “pathetic response of much of the Labour left”, the near total silence of Momentum and the MPs in the Socialist Campaign Group – an attempt to save their own skins. Comrade Werkmann emphasised that Defend the Left was in solidarity not only with the four organisations that been explicitly proscribed, but also with the hundreds, the thousands of innocent comrades who had been smeared by the Labour leadership.

The first speaker in discussion – Graham Bash of the Labour Representation Committee – underlined how he saw the leadership election rule change. It is an attempt to permanently “lock out the left”. True, today the rule change locks out careerists like the pathetic Rebecca Long-Bailey. But that is to miss the significance of the rule change. It has nothing to do with fending off the official left. They no longer represent any kind of threat. No, the rule change is there to draw a line in the sand. It symbolises the end, the complete defeat, of Corbyn and the whole Corbyn project. It is about sending a message to the bourgeois establishment: Labour is ready to serve.

Of course, the new rule requires that a leadership candidate must be nominated by 20% of MPs. That would hardly represent an insuperable barrier to a well organised, Marxist-led, Labour left. But that would need a mass Marxist party already in place that organises throughout the labour movement and digs deep roots in wider society.

Comrade Bash rightly insisted that to complain about the crude injustice that we have seen throughout the course of the witch-hunt was insufficient: “What we see in this conflict from the enemies on the right is class war.” The comrade intriguingly suggested that “new ways of working” would have to be learned if socialists were to be of use to our class.

Rob Sewell, editor of Socialist Appeal, quite correctly criticised the “naive view” in some quarters that the left could ever co-exist with people who were “stabbing us in the back”. He pointed out that we had “missed a few tricks in 2016” and that softness had cost us dearly. However, once again showing a weak grasp of labour movement history, he claimed that the “greatest betrayal in the Labour Party” was Ramsay MacDonald in 1931. Not support for World War I, not defence of the British empire, not the banning of communists. What MacDonald did in 1931 was fully in accord with the rotten tradition of the pro-capitalist right: defending the interests of capitalism, not the interests of the working class.

Showing a distinct lack of imagination, the comrade drew “parallels” between today and MacDonald’s National Labour-Tory-Liberal national government. Other than reminding readers that “betrayal is not new in the Labour Party, unfortunately”, he did not elaborate. Well, comrade Sewell, is Sir Keir about to jump ship? Join a coalition along with Boris Johnson, Priti Patel and Sajid Javid? No, he wants to be a successful Labour prime minister in the mould of Clement Attlee, Harold Wilson and Tony Blair.

Showing how the comrade remains trapped within the narrow thought-world of Labourism, he insisted that the old clause four was a “socialist aspiration” driven by the politically most advanced working class people in Britain. In 1918, horrified by World War I and inspired by the Russian Revolution, it seems that the most politically advanced workers “aspired” to socialism. Doubtless, that was the case. The most politically advanced part of the working class formed the CPGB in July-August 1920. But what they got from the Labour Party was Sidney Webb’s Fabian clause four. Not the aim of working class rule and ending wage slavery. No, instead what Webb offered was a formulation that was implicitly anti-Marxist, pro-imperialist – not socialist, but state capitalist.

We need a new, Marxist clause four. We should not seek to revive a stinking Fabian corpse.

The World Transformed festival featured around 100 different sessions that ranged from ‘The frontiers of liberation’ (dealing with the history of LGBTQ+) through to ‘Can Labour win?’ However quantity does not necessarily mean quality.

Whilst retaining its hipster-millennial charm, TWT seeks to revive the original enthusiasm of Momentum through an eclectic and contradictory amalgam of utopianism, movementism and opportunism. Some attempts were made to shepherd the ‘silent majority’ of those Corbynistas who never formally engaged with the organised left into unity with the right by stressing the importance of the “next Labour government”.

In previous years TWT had ‘big name’ Labour left speakers and a clear orientation towards the Corbyn project, but now that that moment has passed, the focus is less clear. References to “the other conference – the one we don’t talk about” – highlight the divergence between TWT and the Labour Party since 2019.

The size of the sessions varied considerably, depending on the topic and speakers. Some were no more impressive than a hippie gathering round a campfire, whilst others saw several hundred eager punters surging through the doors, with a number of overflow sessions and queues being directed to other sessions. The more seriously political meetings – or the closest that they came to such a thing – generally averaged around 200 participants.

Likewise, the age profiles of attendees varied, depending on the intended audience for the topic. Those sessions inclined towards movementism or identity politics averaged about 25 (with some specific sessions overwhelmingly younger), whilst those aimed at Labourites drew in comrades whose profile was more in line with the rest of the left. Needless to say, despite sharing the same place – and mutual worship of Jeremy – they did not engage with each other politically.

A common trend throughout many of the sessions was of a particular kind of anarchism that fetishises local organising and mutual aid, as opposed to the serious political organisation of the working class as a whole. Suggestions for direct action ranged from picking up dog shit to bring down the Tories, through to sending out emails to end trans oppression! This form of ‘immediate struggle’, which is detached from any serious strategy for achieving socialism, was a disease that affected the ostensibly sophisticated and theoretically naive alike.

An important feature of the left at Labour conferences is the proliferation of leaflets, journals and bulletins handed out by a swarm of activists. This year was no exception. Despite the diminished strength of the left, we had: Jewish Voice for Labour, Palestine Solidarity Campaign, Labour for a Republic, Socialist Appeal, CLDP’s Yellow Pages and, of course, Labour Party Marxists No27.

The LRC’s Labour Briefing is worth a comment. Its editorial insists that the struggle for the Labour Party is not over. Quite so. “There is a fightback in the party – seen by the excellent results in elections in the constituency sections for the National Women’s Committee and for the conference arrangements committee.” And then: “There is a struggle too in the world outside the Labour Party.” The editorial refers to trade unions – the new left NEC in Unison, and Sharon Graham’s election in Unite – as well as climate change protests and Black Lives Matter. “Connecting these struggles and giving them a political expression” means, “for the foreseeable future, the Labour Party”.

So, the “new ways” of socialists working in service of our class amount to tailism and carrying on carrying on in the old – and failed – ways. The abject defeat of the Corbyn leadership and its complete surrender before, indeed connivance with, the witch-hunt does not seem to have registered. As for the idea that BLM protesters and XR activists will flock into Sir Keir’s party to put the conference arrangements committee into the hands of official left careerists, well that seems more like the forlorn hope that the cavalry will come to our rescue. It is certainly not a viable strategy for socialism.

Then there is the Resist Movement for a People’s Party set up by Chris Williamson – the only Labour MP to stand up to the witch-hunt. This has the advantage, for refugees from Labour, of actually offering them somewhere to go – but it cannot be recommended. Although neither the politics nor the organisational form of the imagined party is yet spelled out, we can reasonably predict that a party born of running away from the struggle in Labour will be unable to fight any other struggles effectively.

According to its leaflet, “Our mission is to develop activities that build trust, capacity and skills, to promote industrial democracy and reduce inequality, eradicate poverty and improve the quality of daily life for all, around essential and innovative environmental policies.” Not the working class politics of the struggle for socialism, but a People’s Party that promises the good life without overthrowing the capitalist state and expropriating the capitalist class.