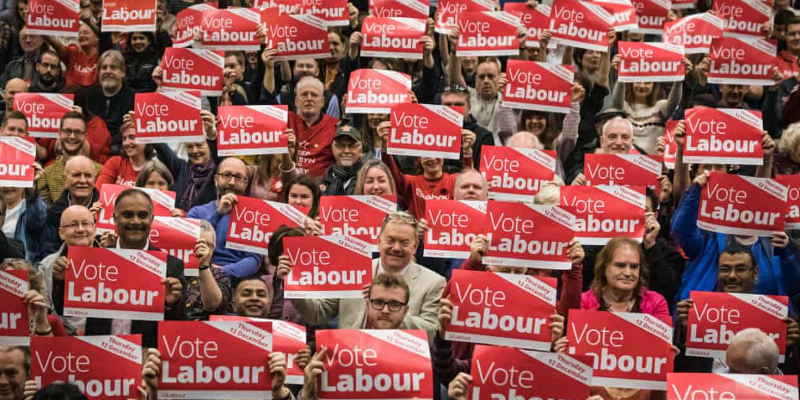 After a shaky start, and a few hiccups and protests along the way, Starmer has clearly emerged as the winner. He has secured his two main objectives: one, to prove to the ruling class that he is a reliable, safe pair of hands; two, to show that Corbynism is dead and safely buried.

Although the red card protest during his speech showed there are still a large number of left delegates from the Constituency Labour Parties, when it really mattered Starmer had the votes he needed to get over the line.

His success is not just measured in votes won or in changes to the party’s constitution and rule book that consolidate the power of the Labour right. No, his success also lies in the demoralisation and disorganisation in both the official left – as represented by the Socialist Campaign Group of MPs – and amongst left activists in the CLPs and trade unions. Left victories over the £15 minimum wage and other such questions will simply go ignored when it matters: drawing up the next general election manifesto.

That is not to say that the left were silent or simply acquiesced – far from it. There were angry speeches at fringe meetings – Richard Burgon’s contribution at the final SCG rally was a particularly well-received example, along with some excellent interventions by left delegates from the CLPs during the stage-managed conference debates. But what was lacking on the left at all levels of the party – and what ensured Starmer’s victory, in the final analysis – was a clear strategy for a serious, militant Labour left that really takes the fight to the right.

For Starmer and the Labour right, conference was vital, in all senses of the word, in their campaign to finally purge the taint of Corbynism. Although the focus was on winning the next election, the primary audience for this performance was not potential Labour voters catching the headlines on the evening news. No, the people to whom Sir Keir has to prove himself is not the electorate, but the real wielders of power: the ruling class in London and Washington. The reliability Starmer has to demonstrate, of course, lies in upholding the capitalist economic system and repudiating the excesses of Corbynism, such as public ownership of the utilities. Thus, the shadow chancellor, the unspeakable Rachel Reeves (a politician with the voice, but not the warmth and empathy, of a Dalek) reassured the ruling class that Labour had finally said goodbye to Corbyn’s legacy and was now “the party of long-term economic stability, of secure public finances and of economic growth”.1

However, the most important reassurance that the Labour leadership had to offer was to the imperialist hegemon, the United States, and its clients. They got it when John Healey, Labour’s defence spokesman, echoed Boris Johnson in his call for a “new and powerful role for Britain in the world” and reiterated Sir Keir’s unconditional support for Nato and the US-imposed international order.2

There were other signs that Starmer and the right were firmly in the saddle. Despite criticism from the left, David Evans was ratified as general secretary with a 59% vote in favour. There was also a marked shift within Labour’s internal regime, where Starmer succeeded in imposing major rule changes, which undermined party democracy and accountability by doubling the threshold of MP nominations needed for candidates to reach future leadership ballots, and by making it harder for CLPs to deselect MPs. These were attacks clearly aimed at the left and were designed, as Peter Mandelson put it, to ensure that there will be no repeat of Corbynism. Well, to show that there will be no repeat of Corbynism, might be a better way of putting it.

The other key rule change endorsed a new ‘independent’ complaints process, initiated following the Equality and Human Rights Commission report on ‘anti-Semitism’ in the party. All part of the ritual humiliation of the left. Conference performed an act of collective penance, in which the lies equating anti-Zionism and the left with anti-Semitism were yet again repeated as verity by Margaret Hodge and Ruth Smeeth. This is now the official version of Labour’s recent history.

The explanation most widely heard in Brighton to account for Starmer’s successes was the support of the trade union right and the bloc votes of the GMB and Unison. The figures support that analysis up to a point. The successes that the left had in card votes came on the rare occasions when key delegations switched sides. The pressure the union leaders exerted on Starmer over last weekend that forced him to water down his proposed ‘reforms’ of the leadership election system also shows the key role of the trade unions in the party.

Although the left remains strong in the CLPs, its position is not overwhelming. Through various manoeuvres, suspensions and expulsions (in some cases while delegates were actually at the conference!) the right has a sizable presence in the CLPs – which rarely speaks in debates, but knows when to put its hands up. The stage management, manipulation and suppression of debate and points of order by such blatantly partisan chairs as Margaret Beckett had to be seen to be believed, and proved decisive in swinging votes. Although the left could point to some victories, such as the condemnation of the Aukus deal and the overwhelming support for a motion attacking Israel as an apartheid state, these were crumbs of comfort in an otherwise grim conference for the left. It was clear, however, that like the £15 minimum pay, they will not find their way into any Labour manifesto.

Much of what happened was not only expected: it was easily predictable and so could have been more effectively countered. For all the powerful cards that Starmer and the right hold in their hands, they are not invincible, as some of the conference votes showed. No, in assessing what happened at Brighton, the left needs to ask how we got here.

A long series of defeats since 2019 have allowed the Starmer leadership and his Victoria Street bureaucracy to get a tight grip over the party. The exodus of 100,000 or more matters not to them. In point of fact it is music to their ears. But it is the compromises, the retreats, the betrayals of the official left in the SCG and Momentum leadership, that have been the major factor in the disorientation and to some extent the disintegration of the left.

In the aftermath of the real defeats inflicted on the left and the further attacks promised in Starmer’s speech, debate on the Labour left remains confused and inchoate. However, both in the pre-conference period and on the fringe at Brighton, two broad positions seem to be emerging.

One is simply to double down on Labour loyalism and cling on to party membership for dear life. The ‘theoretical’ justification for this approach is the belief that the only road to socialism lies through the election of a Labour government and the ‘transformation’ of capitalist society through incremental reform. Such a strategy relies not only in maintaining Labour as a broad party, uniting both the left and the right, but also necessitates compromise and effective subordination by the left to the right to preserve that unity. In effect the Labour left functions as a licensed ‘official opposition’ within the party at the sufferance of the right, taking solace from their self-imposed impotence with the comfort blanket of ‘resolutionary socialism’ and the self-reassurance that they really are dangerous leftists after all. The whole history of the Labour left, at least since 1918, has been to play second fiddle to the right – the open agents of capitalism within the workers’ movement.

The second strand calls for new parties and movements, either completely separate from Labour or a combination of inside/outside organisation. Given the trajectory of Labour after this conference, the call for a ‘new party’ of some type will surely grow: the disaffiliation of the Bakers Union (BFAWU) can only add further impetus to these demands and spark similar moves to break the links with Labour in other unions.

But the history of such initiatives is not an encouraging one and any attempt to exploit the current hostility to Starmer amongst leftwing trade unionists is likely to produce stillborn initiatives, which only create further demoralisation and disillusion. Any attempt to simply replicate the Labour Party through a ‘new party’ based on leftwing activists and disaffiliated unions, such as has been unsuccessfully attempted by the Trade Unionist and Socialist Coalition, is just a dead end and should not be attempted by any serious socialist, no matter how angry they are with Sir Keir and his crew. Emotional spasms of this type are not going to get us anywhere. Similarly, initiatives for a broad party that unites the left outside of Labour will go the way of Respect, the Scottish Socialist Party, Left Unity, and the countless other unity projects that sought to bring the ‘real left’ together by compromising principles and adopting the politics of the lowest common denominator.