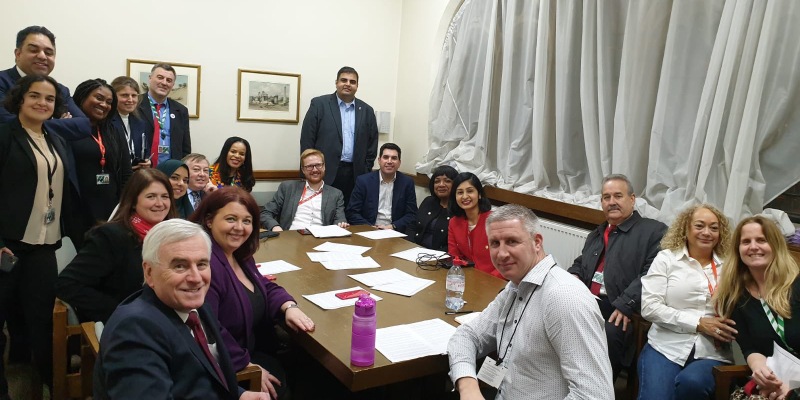 Another day, another initiative on the Labour left. However, this time rather than a new ‘rank and file’ initiative, it seems that a group of 11 Campaign Group MPs and one member of the Scottish parliament are forming a new parliamentary caucus. Reports on social media and blogs like Labour List and Skwawkbox are still somewhat sketchy, but even at this early stage the main outlines of the project seem clear enough.[1]

In what seems to be a carefully planted leak, the group’s ‘strategy coordination document’ outlines the political and organisational basis of the new group, and its relationship to the current Labour leadership. Whilst much social media attention has been on its funding by a levy on MPs, proposals for a full-time staff member/researcher and ideas for more high-profile parliamentary interventions modelled on the US Democrats’ ‘Squad’, it is the broader political orientation of the as yet unnamed group that is of the greatest interest.

The putative group identifies itself, of course, as being on the left, but this is a ‘new left’, you understand. It is distinctly different from the old left represented by Corbyn and the socially reactionary elements of old-style Labourism, because it is “pushing the Labour leadership to do better on its economic approach, and social and environmental justice issues”.[2] We can surmise what this might mean by looking a little more closely at some of the names currently in the frame. They are said to include backbenchers Lloyd Russell-Moyle, Clive Lewis, Nadia Whittome, Rachel Maskell, Dawn Butler and Kim Johnson, along with frontbenchers Sam Tarry and Olivia Blake. Apparently other MPs were asked to get involved, such as Paula Barker, Beth Winter, Nav Mishra and Rachel Hopkins, but they declined for various reasons.[3] On the face of it this motley collection of very soft-left Labourites has little in common. Although they largely represent a new generation of post-Corbyn MPs – that is, people who were elected since 2015 – this group of careerists and opportunists come from different backgrounds and political positions.

Thus Clive Lewis, who is likely to be the leading figure if this project ever gets off the ground, has been a member of Corbyn’s shadow cabinet and was a possible leadership candidate in 2020. Resigning from the shadow cabinet in 2017 over Labour’s support for triggering article 50 to leave the European Union, he is still strongly identified with the remainers.[4] Lewis has also made something of a name for himself amongst Labour activists by ‘campaigning’ for liberal approaches to race, immigration and asylum issues, and presenting the ‘Green New Deal’ as a radical alternative economic strategy. He is the very model of a modern, moderate, post-Corbyn ‘leftist’, who can get a good write-up in The Guardian and space in Tribune, alongside an undeserved reputation as a leftwinger in Constituency Labour Parties. Whilst others on the list, such as Nadia Whittome and Lloyd Russell-Moyle, share a similar pedigree on the soft left, some members of this putative caucus, including Kim Johnson and Dawn Butler, have their roots in other types of activism in local government, community groups and the trade unions.

However, there is one trait that they all share to a greater or lesser extent – a refusal to publicly oppose the attacks on Corbyn and complete silence on the witch-hunt. If the response by the SCG in general to the onslaught of the Starmer leadership has been pathetically supine, then the record of this subset of individuals has been positively invertebrate. Despite their protestations of leftism, MPs like Nadia Whittome and Kim Johnson have joined in attacks on the left in their CLPs or discreetly worked with the party machine to undermine any challenges to the Starmer leadership.[5] This combination of political characteristics and individual careerism finds its nadir in the approach of the new caucus towards the leadership of Keir Starmer. This goes beyond the cowardice and compromise that is the hallmark of the ‘official left’ to complete capitulation.

Our bold ‘leftists’ can read as well as anyone and throughout their distinguished political careers have developed a very keen sense of the way the wind blows in the Labour Party. So the strategy outlined is one of tacking between what remains of the left amongst party activists and snuggling up to the Starmer leadership.

Alongside “conventional parliamentary tactics”, we are promised some really dramatic action to spice things up for their potential audience in the CLPs and “capture media attention”, such as “calling Boris Johnson a liar, actions involving dresscodes, knee in the chamber, etc”.[6] There is a fine heroic, historical tradition of working class tribunes using the platform that parliaments can provide to denounce the ruling class and mobilise a mass movement against capitalism. But what even these MPs admit are puerile parliamentary stunts are certainly not that!

While this publicity-seeking might catch the eye of the media and get a few headlines, their real attention is focused elsewhere on what, significantly, the new group defines as its “insider strategy”. These “tactical approaches” aim to put “pressure on Keir Starmer off and on his front bench” by “working alongside Starmer and trying to steer him rather than resist or remove him” (emphasis in original).[7] This strategy of surrender is couched in the fashionable language of “an alliance between GND (green new deal) and new/progressive economics”, representing little more than some warmed-over Keynesianism, elements of modern monetary theory and worthy green projects.[8] Like Labour’s 2019 election manifesto, this represents nothing more than a modified, regulated capitalism, albeit with a green-wash makeover. However, given what we have heard from the Labour leadership about its pro-business credentials, it is likely that even these timid, ‘progressive’ reforms will get short shrift from the oh so responsible shadow chancellor, Rachel Reeves.[9]

It does not take a political genius to predict that this new group is unlikely to get very far. It clearly represents something of a split to the right by some elements in the rather quiescent and actually quite moribund SCG. At all levels of the party former leftists have moved on from keeping their heads down to now actively making their peace with the Starmer regime. This should not surprise us, given the experience we had throughout the witch-hunt when supposed leftist MPs and activists either stood mutely aside or – even worse – joined in the attacks on the genuine left in the Labour Party. This new initiative is really just the logical extension of that approach.

Will anyone be convinced by this ‘insider strategy’? Starmer and his allies will not be impressed. Although they already have enough useful idiots recruited from among former leftists who abandoned the cause, a few more are always handy. However, for all the fine talk of a new strategy, it will be the leadership that is calling the shots: all this new group will be doing is providing a mildly left cover for Starmer, while trying to persuade Labour activists to concentrate on the main issue: unite behind the leadership and focus on ‘getting rid of Johnson’.

It is possible that some left activists might be persuaded to go along with the politics of this putative split from the SCG. In the wake of the defeat and disintegration of the Corbyn movement, the failure of the official left to offer any sort of lead has disorientated and demoralised many. So some might clutch at these straws of bizarre parliamentary stunts and making your peace with the leadership for want of anything else. But if they do they will surely find themselves simply acting as bit-part players, mere voting fodder supporting the careers of political opportunists.

The politics of this new group, however, point to something more fundamental than just individual failings and venal parliamentary ambitions. This tendency towards compromise is inherent in the Labour left: it is an original sin that flows from their focus on achieving ‘socialism’ through the election of a left Labour government, which in turn is predicated on the necessity of unity with and political surrender to the pro-capitalist Labour right. The whole history of the official Labour left is made up of these types of compromise, which end up ultimately as major betrayals and defeats for the working class.

In its timidity and complete surrender to Starmer, the politics of this new group of MPs is just the latest iteration of this thoroughly discredited and putrid tradition