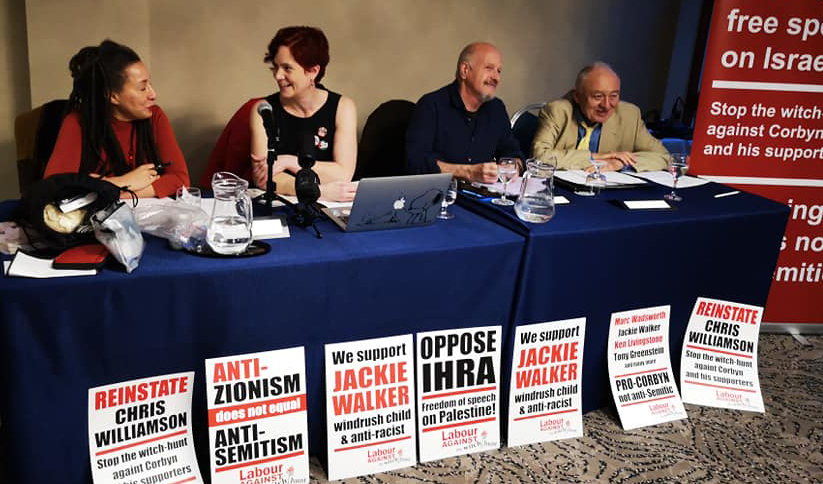 Just over 100 comrades attended the March 25 ‘Defend the left!’ meeting in central London, hosted by Labour Against the Witchhunt. Platform speakers Ken Livingstone, Graham Bash and Jackie Walker opened a discussion on the state of the Labour Party, the ongoing purge of left comrades and how we can fight back and defeat the ‘anti-Semitism’ provocation against us.

Tina Werkmann – who chaired the event – read messages from Chris Williamson and Ken Loach. She also observed that the left has never been in a better position … but the right is fighting back with every trick in the book. The most effective weapon of the right has proved to be the baseless accusations of anti-Semitism. That has cowed large sections of the ‘official’ left into silence. Those who dare speak out are the exception. But that is exactly what must happen if we are going to win the prize. To be silent in the midst of a witch hunt is to be complicit.

Ken Livingstone kicked things off with a checklist of the various calumnies he has faced over the years. “Anti-Semite” (obviously), but additionally a tax-dodger, a violent thug, corrupt, alcoholic, a Soviet spy, Gaddafi asset and …. a fan of gay group sex in various sleazy clubs, where he was once sodomised by six men.

On the day that he became leader of the Greater London Council in 1981, he was branded by Thatcher as a man with well-made plans to impose on the UK “a communist tyranny” akin to eastern Europe. Nonsense, of course, but it did not stop the mainstream media from suddenly becoming very interested in the ideological implications of cutting tube and bus fares in the capital – “the Daily Mail brought its war correspondent back from the Middle East” to cover the revolution in County Hall and demanded that he file six stories per day. “I’ve never seen a reporter under so much bloody pressure,” Ken quipped.

His key point was that there was nothing new about these provocations against leftwingers. In this country, it means lies and smears about anti-Semitism; in other parts of the world it can mean assassinations. He reminded us of the role of the right in the Parliamentary Labour Party – specifically in the shape of that oaf, John Mann, who ambushed Livingstone with absurd charges of “Nazi apologist”, conveniently with a BBC news team in tow. Ken hit the nail on the head when he recounted his own experience with the Labour Party’s disciplinary unit – “a Labour machine controlled by all the old ghastly Blairites … and doing everything possible to get rid of” Corbyn. Thatis what has fuelled “all this stuff about anti-Semitism”, he correctly pointed out.

Listening to all this, I could not help thinking what a shame it was that Ken Livingstone had decided to ‘help out’ Jeremy Corbyn by resigning from Labour in May 2018, instead of continuing to fight the ridiculous accusations made against him, which saw him suspended from the party for two years.

Next up was Graham Bash – stalwart of the Labour Representation Committee and Jewish Voice for Labour, but speaking in a personal capacity. With Chris Williamson’s suspension from the Labour Party, we have reached a “pivotal moment”, the comrade declared. This is another coup attempt and the attack on us “will not stop” until the right  has reasserted the “primacy of the parliamentary party over the membership”.

Since the day that Corbyn was elected Labour leader, the key task has remained the same, the comrade emphasised. “The only possible way to fight” the “powerful opposition forces” was to create an “anti-establishment insurgency from below”, channelled through a “democratic, grassroots movement”, with the declared aim of transforming the party. That is the “nub of the problem we face”, he said: “the tension between the PLP and membership – exacerbated by the political degeneration and incorporation of the leaders of Momentum – has now reached a critical moment”.

Our dual task is to be “both supportive and independent of our leaders”, he told the meeting.

Clearly, Graham was articulating the frustration of many left comrades in the party and he highlighted some key tasks that Labour Party Marxists has consistently agitated for since Corbyn won the Labour leadership. Yes, that will require an organisational expression of the left that can coordinate, initiate and make a decisive impact in the inner-party battle. Momentum is the private property of Jon Lansman and – as comrade Bash correctly stated – its leaders have now crossed the line and, in my opinion, should be effectively regarded as allies of the right in the party.1)In the general discussion following the speakers’ presentations, a comrade read comments from Lansman to the effect that “Jackie Walker is an anti-Semite and leads the anti-Semites of this country”. Above all else, however, the Labour left needs to draw a clear line of political demarcation/independence from the Corbyn/McDonnell leadership.

Corbyn’s strategy of concession and accommodation of the right wing in the party is hopeless and is in real danger of demoralising and demobilising the mass membership base. Meanwhile, it seems pretty clear that John McDonnell has effectively caved in to the PLP right – he has “fallen apart”, as one speaker from the floor put it later. Some comrades I spoke to after the meeting suggested that the absenceof an organised rank and file had left Corbyn and McDonnell vulnerable and susceptible to pressures to compromise and backtrack. No doubt, the strains on both these figures have been immense and must have cost them a great deal personally. We are where we are, however. The political autonomy of the Labour left that comrade Bash calls for must find one important expression in sharp criticism of Jeremy Corbyn and – yes – open condemnation of some of the political positions John McDonnell has taken (a stance that comrade Bash explicitly rejected in the debate).

In a highly personal, very moving speech, Jackie Walker usefully highlighted an illusion that the vast majority of Labour lefts have historically entertained. That is, the Labour Party – as “a broad church” – was defined by “a deal with the other side” (ie, the Labour right). “Now that we had won the leadership via democratic means”, after having “supported loyally” that wing of the party in elections and campaigning, we thought they would now “do the same for us”. But “we were wrong,” she bluntly concluded. Quite right. The pro-capitalist, war-mongering reactionaries of the right of the Labour Party should not be regarded as ‘comrades’ that we may have gentle disagreements with. Labour needs to be refounded on the basis of genuine working class politics and in the form of a permanent united front of all socialist and communist groups, leftwing think tanks and progressive campaigns.

As we fight for this, we should explicitly state that there would be no place in the ranks of a Labour Party transformed in this way for the likes of today’s PLP majority. We should not regard them as a legitimate trend within any workers’ movement worthy of the name.

As if to underline this point, comrade Walker herself – having also been suspended for two years – was finally to face her hearing over further absurd ‘anti-Semitism’ allegations the next day. She was, of course, expelled on March 27 – not actually for ‘anti-Semitism’, of course, but for making “prejudicial” comments that were “grossly detrimental” to the party (such as stating, “I still haven’t heard a definition of anti-Semitism that I can work with”).

It was clear that the majority of comrades were not simply exasperated with the softly-softly approach that has characterised Corbyn’s attitude to his opponents in the PLP, but now appear to be willing to support a political initiative to organise the left in the party as an independent political actor in the battle for the heart and soul of Labour. This is long overdue and something that we should all energetically support.

[1]. In the general discussion following the speakers’ presentations, a comrade read comments from Lansman to the effect that “Jackie Walker is an anti-Semite and leads the anti-Semites of this country”.