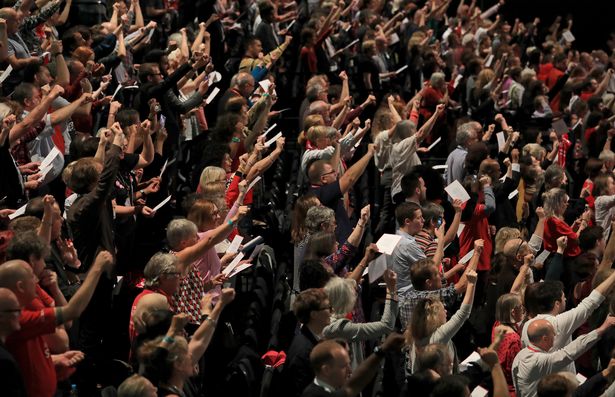 One thing has become pretty clear at this year’s conference: the huge increase in membership and consequent radicalisation sparked by the election of Jeremy Corbyn in 2015 has not found much reflection within the trade unions.

This is hardly surprising, of course. Corbyn’s election had little effect on the bureaucracies’ control over their unions and this is exemplified by the way they vote at conference. On matters that have not been decided in advance, all union delegations are simply instructed on how they should cast the vote of their hundreds of thousands of members.

That was the case on Saturday in a series of card votes over proposed rule changes, and two in particular stand out. First, there was the vote on the NEC’s proposal to “fast-track” expulsions of party members whose behaviour is judged to be irredeemably unacceptable – without the need for any hearing, for example. Understandably, most individual delegates were less than convinced by this proposal and CLP representatives voted narrowly to reject it (52%-48%). By contrast, the vote of affiliates (ie, overwhelmingly the unions) was 97% in favour! The CLPs and affiliates have equal weight, of course, both accounting for 50% of the total vote.

Then there was the card vote on ditching the 1995 Blairite version of clause four in favour of the original (Fabian) version. We have made clear our criticisms of the 1918 wording, but it is self-evident that its reinstatement would have marked a substantial advance. CLP delegates voted 56% in favour. But over 99% of the affiliated unions and socialist societies voted against!

On Sunday a series of national policy forum documents were put before conference. As delegates cannot amend these documents, the only option they have is to propose a ‘referencing back’ of particular sections of these for the NPF to reconsider (clearly, the whole undemocratic NPF should be abolished). In relation to the NPF document on education there were several such proposals, one of which specified that it should be reconsidered on the grounds that it did not contain a clear commitment to abolish grammar schools.

Incredibly, none of these reference-back proposals are put before conference in writing – delegates have to listen really carefully about what is being proposed. Perhaps even more incredibly, it was a full three hours later when the chair, Andi Fox, put them to a vote – without even a reminder as to their contents. Unsurprisingly, there was a lot of confusion in the hall. And when the unions overwhelmingly rejected every single reference back, this caused a huge ruckus and eventually Andi Fox agreed that the votes would be revisited.

Sitting at the back of the hall, it did indeed look incredibly undemocratic: in vote after vote, a clear majority of people voted in favour of a particular reference back – but then the chair ruled that the vote was, in fact, lost. Why? Because in the areas where the union delegates sit, most had voted against. The chair explained that as she knew “certain stakeholders” hold more votes than the CLP delegates, she had taken that into consideration to make her decision.

Numerous delegates got up to express their dismay at these rulings – should the chair not actually be counting all the hands? “What is the point of me being here?”, one delegate asked? “Everything us CLP delegates are trying to get through is opposed by the unions over there!” Encouragingly, there was also discontent within the union delegations and members were seen arguing amongst themselves over the wisdom of voting against the abolition of grammar schools, for example.

So what is the solution? Certainly Labour should remain a federal party – indeed in our view it should encourage the affiliation of all working class organisations, including left groups, and grant them the right to participate in its decision-making process. But, when it comes to trade unions in particular, we are talking about mass organisations with less than vibrant forms of democracy and accountability. All too often the bureaucracy is given a free ride.

That bureaucracy knows which side its bread is buttered. Its role as the intermediary between the employers and their workers requires that it must appear ‘reasonable and acceptable’ to both sides. In reality, left to itself, it acts as a stalwart of the current capitalist order. And it follows from that that the union bureaucracy tends to side with the ‘moderate’ wing of the Labour Party – in other words, the right.

The solution therefore must lie in the ability of the union membership to control and hold to account their leaders. We need the great mass of that membership to get actively involved – in the Labour Party as well as in the unions – to demand that their interests really are represented and that the bureaucracy upholds democratic principles. And such mass participation would make it less likely that the bureaucracy continually votes with the right at Labour conference.