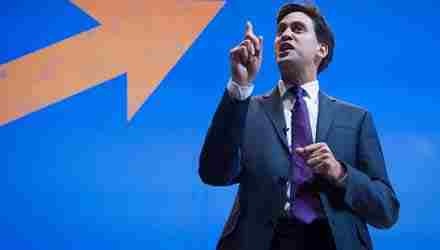 When Ed Miliband tells the Trades Union Congress to “show courage” by backing his proposals to neuter the collective political role of affiliated trade unions within the Labour Party, we should understand the word ‘courage’ in the same way as we understand, the phrase, ‘difficult decisions’, when he and Ed Balls promise to continue with economic austerity under a Labour government. ‘Courageous’ and ‘difficult’ are the words of praise heaped on Labour leaders who attack the working class and the workers’ movement.

Where was Miliband’s courage in face of millionaire media hysteria over the totally legitimate, now vindicated, participation of trade unionists in Falkirk Constituency Labour Party? But he has found the ‘courage’ to refuse to apologise for the baseless suspensions of Karie Murphy and Stevie Deans, on the spurious grounds that “at each step the general secretary and the NEC have acted quickly to protect the interests of the party” (Labour Party statement). Although “no organisation or individual has been found to have breached the rules as they stood at the time”, Falkirk CLP is still under ‘special measures’, and “Labour intends to impose a centrally decided shortlist of candidates for 2015”.1

Throughout the Blair years of New Labour government, the misnamed pro-capitalist Progress organisation funded by Lord Sainsbury packed the selection meetings of numerous CLPs, with never a murmur of protest from Murdoch or the Tories – or Labour HQ – so that now the parliamentary Labour Party is dominated by smart-suited careerists with barely a genuine trade unionist in sight. And Ed Miliband is one of them.

In fact, far from being “panicked under ferocious Tory fire” into a knee-jerk response to the manufactured Falkirk ‘scandal’, as Mark Seddon claims,2 Miliband was quick to take advantage of the opportunity to announce his plans to diminish the influence of trade unions within the party, through a consultation about the relationship (the Collins review) ending with a special party conference in April 2014.

Of course, the attack on collective affiliation, by requiring individuals to ‘opt in’ in place of the right to ‘opt out’, is couched in beguiling language: “I want to make each and every affiliated trade union member a real part of their local party, making a real choice to be part of our party, so they can have a real voice in it,” said Miliband in his September 10 speech to the TUC. And, by making those who ‘opt in’ to the affiliated political levy full party members, Miliband hopes to raise Labour’s individual membership from around 200,000 to more than 500,000.

Those of us, like my comrades in the Labour Representation Committee,3 who are campaigning to defend the Labour-union link and the principle of collective decision-making – in working class politics as much as in workplace matters – should take note what an easy target is the status quo. See how Miliband was able to denigrate the existing arrangements when he spoke to the TUC: “Some people ask: what’s wrong with the current system? Let me tell them: we have three million working men and women affiliated to our party. But the vast majority play no role in our party. They are affiliated in name only”.4 It has to be said, of course, that this is also true of the vast majority of Labour Party members, and only a small percentage play an active role even in canvassing, let alone decision-making.

So we have to have the “courage to change” – but not in the way Miliband proposes, by liquidating collective decision-making and collective action (‘united we stand’) in favour of individual choice (‘divided we fall’). On the contrary, we must aim to rebuild our collective strength, not dismantle it. Revitalise the trade unions by thoroughly democratising them: officials at all levels must be paid the average wage of their members, and be elected from below, not bureaucratically appointed from above. Bring the Rail, Maritime and Transport union and Fire Brigades Union back into the party, win the Public and Commercial Services union to affiliate, bring all trade unions and all socialist and working class organisations into the party, make the Labour Party into a permanent united front of the whole working class.

With this perspective, we must reject Miliband’s ‘opting in’ proposal, and overturn the existing ‘opting out’ system. As Hazel Nolan of London Young Labour told the September 3 launch meeting of the Defend the Link campaign, “When you buy a bottle of coke, you can’t opt out of paying the tax on it. Why should you be able to opt out of paying your share of your union’s democratically agreed political spending?” The right to opt out of the union’s political fund is a legally imposed right to scab, which should be overthrown, along with all anti-trade union laws.

At the same meeting the Communication Workers Union’s Maria Exall struck the right note, combating the idea that the campaign should merely defend the status quo and postpone political disagreements until this latest attack on the link had been defeated, or that criticism of union leaders who might support the campaign be muted. “There is a problem within the trade unions – the bureaucracy. How come we still have anti-union laws? The unions let New Labour through,” she said.

The campaign must not be left in the hands of overpaid trade union bosses like Len McCluskey of Unite, Paul Kenny of GMB and Dave Prentis of Unison, who do not practise the anti-bureaucracy, anti-careerist principle that officials in the workers’ movement should live on the same wage, or the average wage, of those they represent, and who each preside over an army of appointed officials.