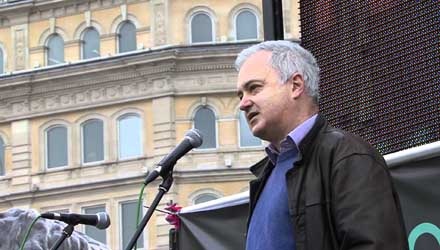 Stan Keable of Labour Party Marxists reports on the September 14 Stop the War Coalition AGM
Despite the war threat against Syria. Despite the temporary boost given to the anti-war movement by the August 29 parliamentary vote against a military attack on Syria. Despite David Cameron’s humiliation, attendance at the 2013 annual conference of the Stop the War Coalition at Westminster University was down to less than 100. This was compared to the 200-plus in March 2012 and over 300 at the 2010 conference. That was the first year in which the Socialist Workers Party no longer mobilised its rank and file to attend, after John Rees, Lindsey German and Chris Nineham split off from the SWP to form Counterfire.

The coalition has been suffering from a lack of foot-soldiers ever since, and the appearance of new faces on local demonstrations immediately prior to the parliamentary vote was not reflected in attendance at conference. Although the SWP’s Judith Orr chaired half of the conference, few SWPers were present and the organisation’s Party Notes circulated two days later made no mention of Stop the War.

The coalition’s lack of numbers, however, is now compensated for by its gain in prestige, with official recognition by the Trades Union Congress. In 2003, although the TUC had opposed the invasion of Iraq, STWC vice-president Andrew Murray explained, it had “stood aloof from the movement”. Now, in its September 11 statement on Syria, the TUC general council committed itself to “strongly oppose external military intervention” and to “work with civil society organisations, including … the Stop the War Coalition.”

As we know, Ed Miliband had agreed to back an attack on Syria, but had a very late change of mind. This, and the rebellion of some Tory MPs, can only be due to the anti-war pressure of public opinion, with sitting MPs fearing loss of votes. No doubt the campaigning by Stop the War over the years has played its part, but it is the transparent horrors of the invasions and occupations of Afghanistan and Iraq which have disabused public opinion of the illusion of humanitarian intervention.

“We stopped Cameron, but Obama still plans war,” proclaimed STWC’s August 30 statement. But by the time they reached conference, the ‘officers group’ had sobered up, tempered their triumphalism somewhat, and recognised that public opinion against an attack on Syria had other sources besides their campaigning. “What produced that vote?” asked comrade Rees. “We helped. But the mass experience of war did not match the media story. And the resistance over there played its part.” STWC had “mounted effective opposition”. It was “not just public opinion,” he argued. “Compare the privatisation of Royal Mail”, which is going ahead despite being very unpopular. And why did opposition break first here, and not in France, not in the US? “Because of the consistent campaigning of STWC,” he claimed.

There were attempts from the various STWC officers to characterise the significance of the August 29 vote. Jeremy Corbyn, chairing, said the vote had been a “mea culpa” for many MPs, who felt guilty about voting for the invasion of Iraq in 2003. “We are into a historical change in relations between the west and the rest of the world,” he claimed – but then hedged: “But not for ever”. Chris Nineham, in similar vein, spoke of “a breakthrough in the movement”. STWC had “mobilised thousands in last few weeks”, he gushed. “Lindsey now gets invited onto TV. We need clarity and unity, to unite all the forces against austerity and war.” All the forces? At last, I thought, Hands Off the People of Iran will be able to take its rightful place in Stop the War – not!

The British ruling class always and everywhere does foreign policy in its own selfish, exploitative and oppressive interests – never in order to ‘save lives’. What a pleasure it was to see the arrogant bourgeois persuaders, after confidently pumping out their war propaganda, suddenly brought to a grinding halt on the buffers of obstinate public opinion. As Abe Lincoln said, “You can’t fool all of the people all of the time”.

The famous aphorism of Clausewitz is that “War is the continuation of politics by other means”. In other words, war is a form of politics. But politics is always class politics. In war, the interests of one ruling class is pitted against the interests of another ruling class. The working class is mobilised in support of our own rulers, thereby strengthening their power over us. The independent politics of the working class means opposing the foreign policy and military adventures of our ‘own’ ruling class, preventing them from strengthening their hold over us by exploiting and oppressing others. The main enemy is at home.

Unfortunately, freedom of discussion is not the method of the bureaucratic clique which runs the Stop the War Coalition. It evidently prefers to keep conference – and local groups – free of sharp political debate. God forbid that political differences should be thrashed out openly. But their war on politics can only mean protecting their own politics from being challenged.

‘Guidelines for local groups’, submitted to conference by the ‘officers group’, waxed eloquent about the breadth of opinion in the coalition: “Stop the War represents the opinion of the vast majority of people in this country on foreign policy.” This is indeed a strange phenomenon, since it is led by a variety of self-styled Marxists.

Local groups must “work hard to ensure the widest possible participation in order to reflect this breadth of opinion”. Stop the War has “very wide backing, symbolised by the recent support from the TUC congress”. Groups must “get as broad a leadership as possible, always looking to involve new activists”.

Groups must “maximise the … impact of … our arguments”. While we should “encourage wide discussion”, public meetings should “focus on the key campaigning issues and on the main task of ending western intervention, not on potentially divisive political debates”.

Several speakers had raised issues which they thought should be linked to opposition to military attack: anti-austerity, anti-racism, immigration, defence of whistleblowers, freedom of information and the stifling of debate.

Chris Nineham, in moving the guidelines, said: “The left will have its political debates, but not inside Stop the War, because that would be divisive.” Matt Willgress from North London, under the rubric of teaching us ordinary folk ‘How to build a local group’, explained that “people would rather lobby MPs than debate about the Syrian left with the usual suspects”. Philistinism rules OK!

Nevertheless, Andrew Murray, agreeing with my assertion that “the main enemy is at home”, conceded that “No-one is saying we can’t debate differences, but we must keep our eye on the ball.”

Sami Ramadani urged us to “distinguish patriotic resistance from terrorism in Iraq (where I was born)”. The most popular platform speaker, he advised us to “celebrate a great victory – but do it quickly, as they will get back at us very soon”. He congratulated the British parliament “for listening to British people, for once”, and the US people “for not listening, for a change, to Fox News”. The more ‘peace president’ Obama preached war, the more the American people wanted peace, he said. And he happily dished out congratulations to the French people, the Syrian people (“Yes, there is a democratic opposition”), the Iranian people and the Egyptian people, who all “forced their government to oppose an attack on Syria”. Congrats to STWC too, he said: “Unity is the key to opposition to imperialist intervention, and support for the struggles of the people for democracy.”

So steer clear of “divisive” debates.