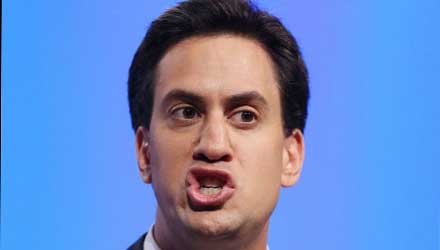 Ed Miliband told the Trades Union Congress to “show courage” by backing his proposals to further downgrade the role of affiliated trade unions.1 But ‘courage’, like ‘difficult decisions’, are the words of praise heaped on Labour leaders when they attack the working class in the ‘national interests’ of capitalism.

Throughout the 13 years of New Labour governments, Progress, a shadowy organisation heavily funded by Lord Sainsbury, packed the selection meetings of Constituency Labour Parties, with never a murmur of protest from the Murdoch press or the Tories – or Labour HQ. Now the Parliamentary Labour Party has barely a genuine trade unionist in sight.

Was Miliband “panicked under ferocious Tory fire” into a knee-jerk response to the manufactured Falkirk ‘scandal’, as Mark Seddon, chair of the Defend the Link campaign, claims?2 It seems unlikely. No, Miliband used Falkirk as an opportunity to announce long-held plans to reduce trade union influence. The Collins review was deliberately timed to pre-empt input from union annual conferences.

At Labour’s September 2013 annual conference, Harriet Harman opened the ‘debate’ on Lord Ray Collins’ interim report. “You could not have anyone better than Ray,” she told us, “to listen to everyone’s views and to draw them together.” And there in a nutshell, is the hollowness of Labour Party ‘democracy’ today. You get to express your views, as in an employer’s suggestion box. Those above “listen”, so you are supposed to feel grateful and wanted. Then they cherry-pick the ideas they want, and tell you it’s what you have collectively chosen.

Lord Collins stressed how proud he was to be a trade unionist and told us not to worry – he would “retain the constitutional collective voice of the unions”. Ed wants to “mend the link, not end the link”, he said, but it has to change, so it becomes “open and transparent”.

The interim report covers more than the union link. It sets out ‘what Ed wants’ in a renewed relationship with the unions, in which, Ray assures us, collective affiliation will not be touched; the development of standardised constituency development plans (more central control?); primaries, starting with the London mayor contest; and “fairness and transparency” in the selection of candidates. Each section of the report has a series of questions along the lines of ‘How shall we fulfil Ed’s idea?’ Everything will be settled at the special conference on March 1.

Miliband’s attack on collective affiliation, by requiring individuals to ‘opt in’ in place of the right to ‘opt out’, is couched in the beguiling language of liberal individualism: “I want to make each and every affiliated trade union member a real part of their local party, making a real choice to be part of our party, so they can have a real voice in it,” he told the TUC. By making those who ‘opt in’ to the affiliated political levy full party members, Miliband hopes to raise Labour’s individual membership from around 200,000 to more than 500,000.

Collective decision-making and unity in action – ie, solidarity – is the key to working class strength, in political struggles just as much as in the battles with employers. Those of us campaigning in our unions and in the party to defend the link should take note what an easy target the status quo makes. See how Miliband was able to denigrate the existing arrangements when he spoke to the TUC: “Some people ask: what’s wrong with the current system? Let me tell them: we have three million working men and women affiliated to our party. But the vast majority play no role in our party. They are affiliated in name only”.3 It has to be said, of course, that this is also true of the vast majority of individual Labour Party members. Only a small percentage play an active role in the party, and even then the activists do much more canvassing than decision-making.

So we have to have the “courage to change” – but not in the way Miliband proposes, liquidating collective political decision-making in our trade unions (‘united we stand’) in favour of individual choice (‘divided we fall’). On the contrary, we must rebuild our collective strength. Not dismantle it. We must revitalise the trade unions by thoroughly democratising them: officials at all levels must be paid the average wage of their members, and be elected from below, not bureaucratically appointed from above. We must bring the Rail, Maritime and Transport union and Fire Brigades Union back into the party, win the Public and Commercial Services union to affiliate, bring all trade unions and all socialist and working class organisations into the party, and transform Labour into a permanent united front of the whole working class.

With this perspective, we must obviously reject Miliband’s ‘opting in’ proposal, but also overturn the existing ‘opting out’ system. As Hazel Nolan of London Young Labour told the September 3 launch meeting of the Defend the Link campaign, “When you buy a bottle of coke, you can’t opt out of paying the tax on it. Why should you be able to opt out of paying your share of your union’s democratically agreed political spending?” The right to opt out of the union’s political fund is a legally imposed right to scab, which should be overthrown, along with all anti-trade union laws.

At the same meeting the Communication Workers Union’s Maria Exall struck the right note, combating the idea that the campaign should merely defend the status quo and postpone political disagreements until this latest attack on the link had been defeated, or that criticism of union leaders who might support the campaign should be muted. “There is a problem within the trade unions – the bureaucracy. How come we still have anti-union laws? The unions let New Labour through,” she said.

Trade union input into the party must not be left in the hands of overpaid trade union bosses like Len McCluskey of Unite, Paul Kenny of GMB and Dave Prentis of Unison.

A deal is being worked out behind closed doors to modify the link – a compromise designed to leave intact and unaccountable both the dominant Parliamentary Labour Party and party bureaucracy, on the one hand, and the trade union bureaucracy which finances it, on the other. The compromise deal has been or is being settled behind the backs of the rank and file, who will nevertheless be asked to endorse the deal at the March 1 special party conference.

In Miliband’s October shadow cabinet reshuffle, the three senior figures closely associated with Tony Blair – Jim Murphy, Liam Byrne and Stephen Twigg – were demoted in what has been dubbed the “cull of Blairites” (but left MP Dianne Abbott was ditched too, presumably for premature opposition to a military attack on Syria).

According to Atul Hatwal on the Labour Uncut website, the appointment of Jon Trickett as ‘deputy chair’ to lead on party reform tells us that Miliband is not going to appeal “over the heads of union leaders to the rank and file”, but “wants to do a deal with the union bosses”.4 The “reform pill” which the unions must swallow if Miliband is not to lose face is “the requirement for trade union levy-payers to opt in to paying some of their political levy towards Labour”.

In exchange, “the union block vote at conference will remain, the unions will retain a separate electoral college in the leadership election and the union reservation of 12 places out of 33 on the NEC (compared to six places reserved for CLP members) will stay”, plus “an extension and entrenchment of the electoral college at CLP level”, justified by “parallel management and voting structures”.

Jon Lansman admits that this kind of rotten compromise was circulated for discussion months ago by the Campaign for Labour Party Democracy “as the basis for just such an agreement between Ed Miliband and the trade unions”.5 The CLPD proposals involved “Meeting Ed Miliband’s aspiration” to impose individual opting-in to affiliated membership, and “Meeting trade union aspirations for a continuing collective voice in the affairs of the party they founded, and sustainable levels of voting and representation.”

This manoeuvre, politely described as “delinking the collective representation of trade unions in the structures of the party from the involvement of individual trade unionists in the life of the party” may be a happy compromise between entrenched bureaucrats, parliamentary and trade union, who function as masters, rather than servants, of our labour movement. However, it leaves both bureaucracies as unaccountable as before, and sets up collective working class political decision-making for further erosion.

In 1909, the Tory Law Lords tried to snuff out the emerging independent political organisation of the workers’ movement with the notorious Osborne judgement, after which affiliated trade unions were prevented from funding the Labour Party for four years, until Herbert Asquith’s minority Liberal government legalised trade union political funds. But the 1913 Trade Union Act also imposed the condition that individual members could opt out of the union’s political fund – the thin end of the wedge of legally backed political scabbing.

Stanley Baldwin’s Tories drove the wedge deeper into a defeated working class after the 1926 General Strike. The Trade Disputes and Trade Unions Act 1927 imposed opting in. Many hard-up trade unionists stopped paying, and the party’s finances and campaigning capacity suffered – but, more importantly, the working class culture of solidarity, of collective decision-making, was further undermined. This was reversed by Clement Attlee’s Labour government in 1946, and the legally imposed right to opt out of the union’s political fund was retained by John Major’s Tory government in section 82 of the Trade Union and Labour Relations (Consolidation) Act 1992.

Now, as ‘Red Ed’ tries to put the clock back to 1927, defending the hollowed out democracy of the status quo is a losing strategy.

5. ‘Labour’s reshuffle – and what it means for party reform’, October 8, www.leftfutures.org.