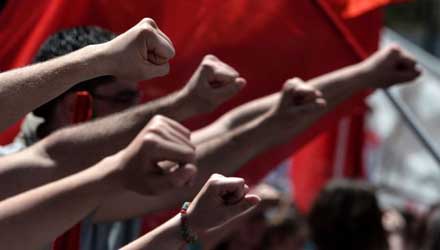 Opposition to the European Union continues to motivate, embarrass and vex rightwing bourgeois politicians. The present situation is easy to summarise. Under severe pressure from the UK Independence Party, David Cameron has committed the Tories to an in-out referendum following the next general election in 2015. If returned to No10, he, therefore, solemnly pledges to negotiate a root-and-branch reform of Britain’s relationship with Brussels. Yet we all know, whatever the outcome, he will inevitably advocate a ‘stay in’ position.

Smelling blood, Nigel Farage is eager to turn the May 2014 European parliament election into a referendum against Bulgarian and Romanian migrants, Brussels corruption and continued EU membership. And, worryingly, when it comes to reported voting intentions, an Open Europe poll puts Ukip on 27% – significantly ahead of Labour (23%) and the Tories (21%).1 Farage also has money, and in large amounts, behind him. Paul Sykes, one of Britain’s richest men, has pledged “whatever it takes” to ensure a Ukip triumph.2

Meanwhile, the swelling anti-EU mood gives rise to further manoeuvre and division within Conservative ranks. Adam Afriyie – tipped by some as a future Tory leader – has been clamouring for a referendum this side of the general election.3 True, this earned him a stinging rebuke from Tory grandees. But Afriyie remains defiant … and a recent Salvation poll showed 55% supporting his stance.4

The foul nature of the People’s Pledge can surely be gathered from the protest it staged outside the treasury on July 21 2011 – the day the International Monetary Fund, EU and European Central Bank ‘troika’ launched its second, £96 billion, Greek bailout. The campaign insisted that there should be no further contributions from Britain. Bob Crow in particular singled out article 122 of the Lisbon treaty, which “obliges” British taxpayers to “risk” billions of pounds at a “time of cuts to public services at home”.5 Presumably Greece should have been abandoned to a disorderly default and forced to exit from the euro zone.

For its part, the British National Party roundly condemns international bankers for “strangling the Greek economy”, demands that the UK “withdraw from the European Union” and wants to reserve government funds for “more useful projects”.6 Sadly, a position which almost passes for common sense on the left nowadays too. Both the Socialist Workers Party and the Socialist Party in England and Wales are set to partner the Morning Star’s CPB in the No2EU electoral bloc.7 According to a current No2EU bulletin, a break with the EU will allow Britain to “be rebuilt with socialist policies.”8 A clear case of national socialism. And, unfortunately, where the CPB, SWP and SPEW have led, Socialist Resistance, Respect, the Alliance for Green Socialism, Socialist Labour Party, Solidarity, etc have followed.

What appears to be an incongruous, puzzling and unnatural alignment between left and right in actual fact stems from a common source. Uniting 28 countries, having an agreed legal framework, committed to the free movement of labour and capital, the EU stands as an existential threat to the nation-state cherished by those for whom the future lies in the past. After all, BNPers yearn for a white, 1950s Britain with traditional weights and measures and close trading relations with Canada, Australia and New Zealand. In an eerily similar way, the nation-state is viewed as the natural vehicle for socialist transformation by left reformists, ‘official communists’ and former Trotskyites alike. The dream is of a referendum which in due course will see a return to Keynesianism, welfarism and British “national sovereignty”.9

As an aside, it is worth noting the deep distrust Marxists have generally had for referendums. So-called ‘direct democracy’ is a chimera in any complex society. Nuances have to be considered, likely consequences predicted and alternatives closely studied. That is why we advocate indirect democracy: ie, the election of recallable representatives who are tasked with debating and deciding political positions and stratagems. Marx certainly denounced – and in no uncertain terms – Louis Bonaparte’s deployment of successive referendums to consolidate his dictatorship and condone foreign adventures.10 The wording of the question is, of course, everything. Eg, to vote ‘no’ was to declare oneself opposed to democratic reforms, to vote ‘yes’ was to vote for despotism and war. Referendums bypass representative democracy, political parties and careful deliberation. Something not lost on Adolf Hitler. He managed to get a 90% mandate for his dictatorship on August 19 1934 – despite a vicious campaign of intimidation, there were millions of spoilt ballot papers.

Against this dire background the position of the Labour Representation Committee stands out positively. The November 2011 AGM agreed resolution 15, which reads as follows:

2. That we should no more oppose European capitalist integration than we would oppose the merger of two companies, even though the bosses use mergers as an excuse to attempt job cuts and other attacks. When Britain plc merges into Europe plc, the answer is to link up with other European workers in solidarity and struggle.

3. To produce a short pamphlet setting out this position.11

Given that the resolution originated with and was moved by the social-imperialist Alliance for Workers’ Liberty, it was perhaps surprising that the AGM voted in favour. But, thankfully, it did. True, there are some problems with it. Eg, a European workers’ government is perfectly fine as a programmatic position, but is a sad joke when it comes to immediate agitation. At present there is no serious revolutionary Marxist partyanywhere in Europe. Nevertheless, the resolution was eminently supportable and it was good to see it gain a clear majority.

That said, LRC leaders such as Graham Bash, Andrew Fisher and Mike Phipps obviously disapproved of the resolution … and, as far as I am aware, the concluding three-point commitment remains unfulfilled. Of course, this may well be due to the decline and disorganisation of the LRC over the last couple of years. Anyway, a May 2014 Euro election dominated by Ukip and British nationalism certainly needs the input of the LRC and other leftwing organisations willing to challenge British nationalism and spread the message of pan-EU working class unity, democracy and socialism.

With the May 24 elections a mere six months away, the AWL has presented this year’s LRC national conference with another resolution on Europe (resolution 13). The 2011 policy, the growth of Ukip and the rerun of No2EU are noted. Ditto those “advocating” a withdrawal from the EU are criticised because it “undermines” the fight for class unity and boosts nationalism.

Admittedly, the conclusion is questionable. The AWL calls for a “campaign advocating a Labour vote” on the basis of opposing cuts, supporting the levelling up of wages across Europe, striving for the pan-European organisation of the working class, scrapping the EU’s bureaucratic structures, etc. Slogans such as ‘For international working class solidarity – for a workers’ united Europe’ are recommended.

Frankly, the conclusion does not follow from the premise. Ed Miliband and his candidates for 2014 will hardly be officially standing on the principles of internationalism and the perspective of a European workers’ government. Nor will they oppose all cuts or advocate a European constituent assembly. Labour candidates will be standing on a Labourite version of British nationalism barely distinguishable from that of the Tories and the Lib Dems. In the revealing words of deputy leader Harriet Harman, the “top priority” of Labour MEPs will be to “make sure they get the best deal” and “bring jobs and growth here in the UK”.12

However, that does not rule out voting Labour – and most LRC affiliates and individual members are firmly within the auto-Labour fold. But surely the LRC should use the May 24 elections as an opportunity to make propaganda for its agreed vision of a Europe ruled by the working class. Instead of running a campaign “advocating” a blanket Labour vote, the LRC should single out and “organise as much support as practicable for Labour candidates supporting our statement” (Labour Party Marxists amendment to resolution 13).

However, there are two other amendments to resolution 13. Politically they are identical. The first, from Brent and Harrow LRC, proposes: “In the event of an in-out referendum on the UK’s membership of the EU, to hold an extensive debate across the whole of the LRC movement on what position to take.” In the same spirit Islington LRC says: “Should there be a referendum on withdrawal of the United Kingdom from the European Union in the future, it is likely the Conservatives and the right wing will focus on attacking positive social reform and workers’ rights. It will be difficult for an argument against a fortress and capitalist EU to get heard. LRC should further discuss its position, should a referendum be called at a future date.”

Frankly, both amendments are disingenuous. What the comrades really want, at least in my opinion, is that the LRC should join with the xenophobic right, and reformist left, under the banner of the nationalist withdrawal campaign. However, lacking the courage to debate this out at the November 23 AGM, we see them resort to the dishonest tactics of obfuscation and delay.

Setting aside time to explore our differences is, of course, an excellent idea. However, let us be honest, the LRC is more than prone to mimic the pinched discussion and debate permitted by the labour and trade union bureaucracy (and the bureaucratic centralist sects). Endless speeches by invited guests, long reports by officers … and three-minute contributions from the atomised affiliates and individual members. That, regrettably, is standard fare for the LRC.

Surely, our AGM should see a full discussion and debate. So, extend the allotted slot for resolution 13 and the three amendments. Give priority to discussion and debate here and now. The LRC can, after all, both confirm existing policy and organise a special conference in the event of a future government naming the date for an in-out referendum.

If the AGM is to be treated seriously, and it ought to be, then comrades from Brent and Harrow LRC and Islington LRC should have enough time to fully, honestly and openly tell us what they think. That would be good. However, attempts to overturn existing policy by what is a sleight of hand must be opposed.