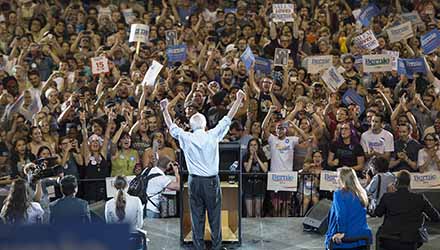 The job of American socialists is to channel the opportunities opened up by the Sanders campaign into the fight for class independence, argues Jim Creegan

Ever since Bernie Sanders announced his candidacy, his supporters have been set upon by numerous paladins of practical ‘progressive’ wisdom, from the left-Keynesian economist, Paul Krugman, and the editorial pages of The New York Times and Boston Globe, to myriad celebrities and prominent liberal elected officials, such as New York mayor Bill De Blasio and Ohio senator Sherrod Brown. Sanders, they incant along with Hillary Clinton, has some admirable goals, but the country is not ready to elect a Brooklyn-born (Jewish) socialist.

Even if elected in November – which despite his stunning win in Michigan still seems unlikely – Sanders stands no chance of getting his proposals for universal government health insurance, free public-university education and breaking up the big banks through a Congress of any party make-up, let alone the current Republican-controlled one. Especially in light of the growing possibility that the right-populist demagogue, Donald Trump, will get the Republican nomination, it is urgent for ‘progressives’ to rally behind a Democrat who is electable and knows how to ‘get things done’ in Washington, instead of wasting one’s vote on an impossible dream.

So reads the Democratic establishment script. And it is being dutifully recited by the party’s elected officials. Not a single mayor or governor has thus far endorsed Sanders. Of the 535 combined members of both houses of Congress, including its black and progressive caucuses, only two members of the House of Representatives – Keith Ellison of Minnesota and Raul Gijalva of Arizona (respectively black and Chicano) – have offered their support to the senator from Vermont.

In response to arguments based on pragmatism, Sanders acknowledges that he would be unable to achieve his programme merely by occupying the White House. He says it will require a “political revolution”, with millions in the streets, to generate pressure for sweeping reforms and the election of a new Congress. Sanders, in other words, presents his campaign not simply as a chance for a new face at the top, but as a vehicle for deeper political change.

It is thus highly significant that just about a third of Democratic electors in Texas, Virginia, Minnesota, Ohio and Florida, around 40% in Nebraska, Illinois, North Carolina and Missouri and about half in Oklahoma, Massachusetts, Iowa and Michigan, 60% in New Hampshire, 67% in Kansas and 86% in Vermont voted for the “socialist”. The lesser-evilist Realpolitik, on which the party hierarchy has leaned for so long to contain left impulses from below, is obviously losing its grip on a growing portion of the Democratic base. A breakdown of the Massachusetts, Iowa, Michigan, New Hampshire, etc results by age and income tells us who is defying the precedents. Sanders is clearly winning caucus-goers between ages 17 and 39, and those on lower incomes.

New Hampshire paints an even clearer picture. There, Clinton could only break even among voters from 45 to 64, and won only among those over 65. When it came to income, only those earning $200,000 a year or more gave Clinton a majority. Sanders won in every other demographic, including women. One important thing these numbers tell us is that Sanders’ appeal is hardly limited to university-educated young people and comfortable middle class liberals. He is obviously drawing in working class voters as well – and, as shown by Michigan, he is beginning to get a hearing from Afro-Americans.

Another time-worn Democratic stratagem that wilted in the snows of Michigan: the use of identity politics as a counter to any signs of class-based voting. The Democrats habitually invoke their professed support of racial-minority, women’s and LGBT rights – issues on which the ruling class is as divided as other social groups – to hide their corporate loyalties and burnish their ‘progressive’ credentials. Thus Hillary and her supporters have lately accused Sanders of conducting a one-note campaign that emphasises income inequality and the influence of big money in politics, to the neglect of what they say are the co-equal evils of racism and sexism. (And it is true that the Sanders campaign, while not eschewing these themes, was a little slow off the mark in taking up the now volatile issues of immigration and police brutality.)

Campaigning on Clinton’s behalf, her husband’s former secretary of state, Madeleine Albright, declared on the hustings that there is “a special place in hell” for women who do not support female candidates out of gender solidarity. But the prize for bourgeois feminist fatuity must go to Gloria Steinem, the 81-year-old founder of Ms Magazine (and unapologetic 1950s CIA operative), who has also been hitting the boards for Hillary. On a television talk show, Steinem explained the surge in young women’s support for Sanders by saying that they were flocking to his campaign because that’s where the boys are. The programme’s host, Bill Maher, replied that Steinem would have immediately branded any such remark coming from him as crudely sexist.

Steinem’s subsequent apology was insufficient to stem the tide of female indignation that greeted her remarks, and, secondarily, those of Albright. Sanders supporters of what the media have called the “post-feminist generation” were highly insulted at the suggestion that their political choices should be governed by their gender instead of their overall views. Never has an attempt to invoke identity politics in opposition to nascent class-consciousness been more crass, and never before has it backfired so badly.

Whatever the final outcome of the primary process, a new constituency – one that first announced its arrival with the Occupy movement of 2011 – has now demonstrated that it has grown and is here to stay. Class disparities have become so palpable that standard Democratic Party tropes are failing to work their diversionary magic on a growing portion of the electorate. A division has opened up between an older, more comfortable layer of the party base, which continues to think pragmatically, cautiously and incrementally, and a younger cohort – students under mountains of debt, workers with ever slimmer prospects of upward mobility – whose conditions are bleak enough to warrant the casting off of old taboos and the taking of political risks. The feeling of having less and less to lose can be the germ of revolutionary consciousness. Will these malcontents remain within the Democratic fold?

Bernie Sanders has evinced a willingness to keep them there with his endorsement in advance of the Democratic primary winner (read: Clinton). But whether he will succeed in bringing them out in great numbers to vote for Hillary in the general election remains an open question – one that is causing the Democratic establishment more than a little anxiety. The grievances that moved them to throw the common sense of party elders to the winds in January, February and March will still be there in November. Sanders might have a harder time liquidating his campaign back into the mainstream party than did Jesse Jackson after his failed presidential bids at the head of his Rainbow Coalition in 1984 and 1988. These are leaner – and angrier – times.

Besides which, the party brass are not quite as certain of Sander’s loyalty as they were of that of Jackson, a committed Democratic politician. Up until the primaries, Sanders always stood for election as an independent. Although he is part of the Congressional Democratic caucus, he also ran unsuccessfully against a Democrat for governor of Vermont in 1986. There is still some doubt as to whether his decision to run this time was an earnest indicator of his loyalty or a tactical move to gain access to voting lists, increase his exposure by participation in the candidates’ debates, and avoid the political oubliette into which Ralph Nader was cast after running for the Greens in 2000. At 74, Sanders is not likely to begin a new phase in his political career. But there is uncertainty as to whether he will stump enthusiastically for Clinton come autumn, or make a merely pro forma endorsement.

But the bourgeoisie’s uncertainty is the revolutionary’s opportunity. The American two-party system is now in greater crisis than it has been at any time since the 1960s, and perhaps even the 1930s. Both parties are in disarray. For the first time since Jimmy Carter moved the Democrats decidedly to the right in 1976 – ie, in the adult memory of most people now alive – the party’s leading contender is being forced to posture, however disingenuously, to the left. The Sanders bid has shaped the politics of the entire campaign. Many on the Democratic side see through Hillary’s hypocrisy, and have suggested through their primary ballots that the lesser evil may no longer be good enough, and that they are not put off by the socialist label (though we know it is misappropriated by Sanders). They could form a constituency for an independent party of the left, in which Marxists would be able to fight for their politics.

But there is also another – more likely – possibility: that dissatisfied Democrats will strive to maintain a coherent presence of some kind within the party, and, following in the footsteps of Max Shachtman and Michael Harrington in decades past, attempt to channel the rebellious energies of 2016 into another vain effort to ‘realign’ the party to the left. Socialists must answer that those who control the party are far too tightly tethered to the country’s ruling class and its empire ever to be transformed, and too well financed ever to be removed. Past practitioners of realignment have most often been realigned themselves – toward acceptance of the existing order.

We must reject the argument that whether to work inside or outside the Democratic Party is a purely tactical question. For socialists, political independence must remain a question of principle, not for the sake of being true to dogmas, but because beating the bourgeoisie on its own turf has been shown to be impossible. Those who said that the Sanders campaign reveals new possibilities clearly have a point. But the job of socialists is to channel those possibilities into an independent fight for socialism, and prevent them, like the hopes of past electoral insurgencies, from being interred in the graveyard of social movements that the Democratic Party has been accurately called.