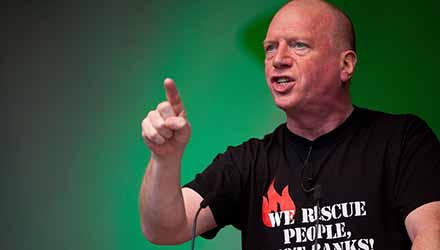 The Labour right is doing all in its power to retain control and exclude opponents. Stan Keable of Labour Party Marxists reports on the AGM of the CLPD

Summing up at the end of the Campaign for Labour Party Democracy’s March 19 annual general meeting in London’s Conway Hall, chair Lizzy Ali reminded us of the “anti-Jeremy plotters” active in the Labour Party, and that we have “many expellees to support”.

Anyone experiencing difficulties with their application to join the party, or having problems with their membership, were urged to contact one of the three national executive members present – Ann Black, Christine Shawcroft and Pete Willsman – who would take up their case. Christine related how she had been “trampled in the rush” at a regional Party meeting, where she had offered to help comrades with membership problems – at least 30 came forward. She asked: “The question is, is this an organised witch-hunt? We need to gather information from all regions, to see if there is a pattern.”

A group of Corbynistas from one Constituency Labour Party told the meeting how they had been suddenly suspended from membership, just in time to be excluded from an important decision-making meeting – a notorious bureaucratic tactic of the right. When they are later reinstated with ‘no case to answer’, no doubt, it will be too late, and anti-Corbyn CLP officers will be entrenched for another year. When the comrades said the CLPD seemed to be taking this outrage lying down, Pete Willsman let rip with a torrent of invective against the right. “We have been struggling for 20 years against Blairite rule. They cheated. They even broke into ballot boxes. They have a culture of cheating. They are crooks. Labour First is organised in every trade union, in every constituency – a continuation of the anti-democratic organisation set up by Frank Chapple.”

The infamous ‘compliance unit’, according to Ann Black, is not to blame for the glut of challenges to membership. Decisions are made by NEC panels, she said: “Blaming the compliance unit is like blaming the ticket collector for a late train.” The unit is a section of party staff which handles such complaints. They had told Christine Shawcroft that they forward membership complaints to the relevant CLP, and if it has no objection to the membership of someone who has been suspended, then the compliance unit has no objection either and the member is reinstated. Christine Shawcroft has requested a report on how many membership challenges are in hand. However, the obvious question remains, she said: “If they are not coming from the individual’s CLP, where are the allegations coming from?”

CLPD youth convenor Dominic Curran reported that the left is now “in charge of Young Labour for the first time in 30 years”, following the victory of Momentum’s youth and students slate in the election of the YL national committee. The downside of this happy victory, however, is that the turnout was a measly 3.5%. John Chamberlain of Labour Party Marxists asked why the NEC had not rejected the dubious election as Young Labour delegate to the Party’s NEC of Blairite candidate Jasmin Beckett, who had scraped in by one electronic vote after a contrived smear campaign had labelled her opponent, Momentum’s James Elliott, an anti-Semite. A recount had been refused by the returning officer, Progress recruiter Stephen Donnelly, and formal complaints were made by Unite and others.1

Our three NEC members explained how the executive, instead of rejecting the election of a candidate who had clearly violated the code of conduct for elections, had kicked the issue into the long grass, allowing Beckett to retain her seat. So much for the idea that the NEC majority is now “leftwing”. All complaints around the YL election, along with the outrageous charges of anti-Semitism made against the Oxford University Labour Club for its stand against Israel’s persecution of the Palestinians, have been referred to an “enquiry” under Baroness Jan Royall – who, Ann Black reminded us, worked for Neil Kinnock and is a supporter of Labour Friends of Israel. Labour Party ‘enquiries’ can last years, and may never reach a conclusion.

Michael Calderbank added his concern that many delegates to the Young Labour conference in Scarborough had been “priced out of attending” because of a failure to provide travel costs. And Pete Willsman explained: “There are no procedures for the enquiry. Write to the party’s general secretary, and send copies to me or Ann.”

Surprisingly perhaps, the massive intake of new members, young and old, since Corbyn’s election as leader became a possibility, has had minimal impact on the CLPD – as with the Labour Representation Committee. (Incidentally, the customary team of sellers of the LRC’s version of Labour Briefing were nowhere to be seen, while ‘the original’ Labour Briefing published by Christine Shawcroft’s Labour Briefing Cooperative had its own table.)

The CLPD’s main role is to promote rule changes to democratise the party – a frustrating process, as rule change proposals from CLPs are subject to a one-year delay. There are seven rule changes already on the agenda of Labour’s 2016 conference, but those submitted by the current deadline of June 24 will only be considered at the 2017 annual conference. The NEC, on the other hand, can submit last-minute rule changes for immediate consideration by conference.

So the CLPD is campaigning for one particular change to be put to conference by the NEC – to “Clarify the rules for electing leader to avoid the party being involved in legal battles”. The purpose is to make explicit that, if a leader or deputy leader contest is triggered, the incumbent will automatically have a place on the ballot paper.

Assistant secretary Barry Gray explained that there are “huge business interests” which not only want to prevent a Corbyn-type anti-austerity government in 2020: “they don’t want an anti-austerity opposition”. The Corbyn-McDonnell leadership has already succeeded in stopping the tax-credit cuts, and “now the Tory government has lost a minister” (referring to the resignation of Iain Duncan Smith). “Ever since Corbyn became the front-runner, the right has been talking about a coup. They know they cannot win a democratic election in the Labour Party, so they are intent on an undemocratic coup.”

John McTernan, previously Blair’s political advisor, is leading the attack, said comrade Gray. The right have obtained legal advice that, if a leader ballot is triggered, “the high court would insist on a 20% threshold for Jeremy. This is the only threat to Jeremy’s leadership,” he added. “The right will fight this.”

Secretary Pete Willsman moved his ‘omnibus’ motion, re-iterating the various – and many – campaigning objectives: to “increase party democracy”, “increase annual conference democracy”, “regain conference sovereignty in relation to policy” and, interestingly, remove “the sole right of MPs to trigger a leadership election”. Of course, one of LPM’s long-term objectives for party democracy is abolition of the post of leader and the system of patronage which goes with it, but not at present – not while Corbyn is under siege in a hostile PLP. Comrade Willsman’s motion commits the CLPD to tackling the “lack of accountability to local parties of councillors and MPs”, which results from the “undermining” of local government committees and constituency general committees (CGCs consist of delegates from party branches and local affiliated trade union and socialist groups).

According to his motion, the CLPD now has “nearly 30 comrades” on the national policy forum, along with several on the joint policy committee, which is the NPF’s leading body. But, comrade Willsman complained, individuals promoted by the CLPD cannot be relied upon when it comes to a vote. In a similar vein, Christine Shawcroft reported that the Labour Party NEC supposedly now has a leftwing majority – but she is “still waiting to see evidence of this”.

The amendment from Labour Party Marxists to motion 5 aimed at removing the bureaucratic exclusion of organised communists from party membership. Clause II (5), which had been inserted into Labour’s constitution in 1944, reads:

“Political organisations not affiliated or associated under a national agreement with the party, having their own programme, principles and policy for distinctive and separate propaganda, or possessing branches in the constituencies, or engaged in the promotion of parliamentary or local government candidates, or having allegiance to any political organisation situated abroad, shall be ineligible for affiliation to the party.”2

Described as “well intentioned” by executive committee member Richard Price, the LPM amendment was remitted to the CLPD executive. Hopefully, this will lead to a well drafted rule change proposal, so that – as I argued from the rostrum – socialists and socialist organisations of all stripes will be able to join the Labour Party’s umbrella, the only condition being that they do not stand candidates against Labour.

A highlight of the AGM was the speech on “party-union relations after Jeremy’s victory” by Matt Wrack, Fire Brigades Union general secretary. The FBU had been affiliated to Labour from 1927 until 2004, when its conference wanted out after being vilified by Labour government politicians during the 2002-03 pay dispute. But in exile the FBU had built a strong parliamentary group – Labour only, unlike some unions, he said – including John and Jeremy, who had “always stood side by side with us”. He had a photo of John and Jeremy on the 1977 FBU picket line: “We don’t forget.”

The FBU is coming back into the party “for public services, for public ownership and for party democracy”, he said. “The supreme party body must be annual conference, with the leadership accountable to conference.” When Matt’s renewed individual Labour membership was reported, he said, Labour First’s Luke Akehurst foolishly tweeted: “Another Trot who should have remained expelled.”

Corbyn’s director of strategy and communications, Seumas Milne, made a “surprise appearance” at the AGM, reassuring us (or perhaps himself) that only a small minority of Labour MPs are hoping for a poor result in the May 5 elections so as to weaken the Corbyn-McDonnell leadership, while the majority “want to make it work”. Nevertheless, he correctly pointed to the “symbiosis between some in the Labour Party and elements of the media and the establishment”. We must counter this, using social media to “isolate those who want to create a feeling of confusion and failure”.

One thought on “CLPD – Advancing but taking heavy casualties”