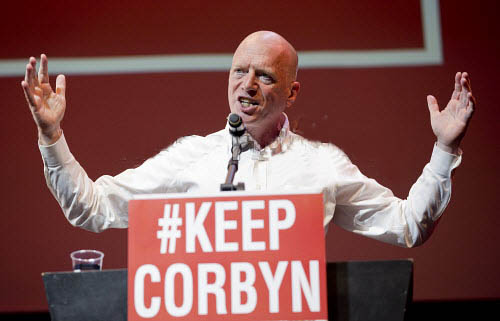 Please pass this on to your regional delegate. Make sure they attend or send delegates!

Re: A meeting of Momentum National Committee delegates to discuss the present situation & consider solutions

Over the past few days we have all been involved in discussions with Momentum members about the concerns which have arisen from the decisions of the Steering Committee to cancel the meeting of the NC due to take place on 5 November and to go ahead with a national conference with online voting of all members.

You will also know the consternation these decisions have caused and the response from London, Eastern, Northern and South East regions.

We are extremely concerned that we overcome this current difficult division that has arisen as quickly as possible. Therefore, we are proposing to convene a meeting of as many NC members as possible in Birmingham next Saturday 5 November to discuss the recent events and, most importantly, consider ways to overcome the resulting differences and to move forward together.

There is no desire or intention to create any separate or parallel organisation within or in opposition to Momentum. We are all committed to building Momentum, as we are all doing at a local level. We simply want to address what we perceive to be a democratic deficit in its decision-making at the present time.

Please let us know if you can attend. If you can’t, is there someone you can send in your place?

We will send out further information about the venue and starting time along with a provisional agenda as soon as we can.

Subject: Re: MOMENTUM SC composition of the national committee and a survey to members

We are facing a major crisis.

In my view this was inevitable once a series of decisions were taken last Thursday and Friday. Nevertheless, we can still try [and] mitigate – and possibly sort out – the mess we are in.

We need to keep in mind a couple of things.

Whatever the weaknesses of the National Committee, it has far more legitimacy than any other body within Momentum. This is the central fact which seems to have been forgotten.

The central problem which has been created is that the SC has usurped the authority of the National Committee. Two decisions have produced this:

In these circumstances, it was inevitable that there would be any angry reaction. The London meeting passed a vote of censure and Jon Lansman, as Chair of the SC, could find no support whatsoever from a single delegate from a single London Momentum group.

Likewise, the Eastern region has expressed similar concern and expressed the view that the issues considered by the Steering Committee are properly matters for the National Committee.

I do not have details but believe the SE may have also taken a similar view. All of this has happened within two days of the Steering Committee.

There are serious risks which arise. Risks of serious division, of demoralisation, of public embarrassment etc.

We can still take steps to address this and put it right. Even at this stage, I would urge the SC to go ahead with the meeting of the National Committee. I am sure that compromises and a way forward can be found over issues such as the form of the conference. These issues are not matters of principle and are secondary to basic rules of democracy and accountability. It is important to note, for example, that the anger at the London meeting united people who disagree on the form of the conference. This was reflected in the vote.

I strongly urge us to agree to convene the National Committee next Saturday as planned and attempt to put this episode behind us.