Nineteen national committee members and 25 observers attended the meeting of the officially disbanded Momentum leadership on January 28 – which is not bad, considering that everybody there was basically sticking two fingers up to Momentum founder Jon Lansman. His long-expected coup on January 10 did away with all democratic decision-making structures in Momentum, including of course, the national committee.

The organisers had received a few apologies, so the meeting was supported by about half of all NC members – there had been around 60 members in attendance at its last meeting on December 3 (which included people sent from affiliated organisations approved by Lansman, as well as ‘representatives’ elected online via ‘one member, one vote’ to hastily created positions). The December 3 meeting, of course, was the trigger for the Lansman coup: despite his best efforts to stuff it with allies, he was outvoted on all major issues – crucially, the NC decided to organise Momentum’s first ever conference on a delegate basis.

Lansman knew that such a democratic conference would have insisted on ending his own one-man rule. Local groups were preparing motions to democratise Momentum and no doubt there would have been a couple seeking to take control of the company set up by Lansman that owns the database and all the income. Plus, we could probably have expected a number of motions critical of Jeremy Corbyn’s current political trajectory.

So Lansman simply pulled the plug. No conference, no potential embarrassment and certainly no coherent challenge to his dictatorial rule over the organisation. Needless to say, the ‘How we win’ event he was planning instead would have been a mere rally, without motions. It did not break anybody’s heart when it was cancelled ‘because of the by-elections’. Of course, there is always an important by-election somewhere, so we are doubtful if this particular gathering will ever see the light of day.

Around 40 branches have so far adopted statements and motions opposing the coup and the imposition of the new, anti-democratic constitution, with only seven supporting it. Apparently, there are over 150 Momentum branches, but it is doubtful if a majority of these are active. The tone of criticism in their statements varies, as can be expected, with some branches declaring that they would not recognise the new constitution, while others merely regretting the way it was imposed.

This was reflected on January 28. Most comrades agreed that there is nothing that can be done about the constitution. It cannot be changed, though there are some question marks over exactly how some bits will be imposed – and when. The rules on barring non-Labour Party members from Momentum, for example, seem to have been written so that they can be used if and when required (for example, in order to keep Jill Mountford of the Alliance for Workers’ Liberty out of high office). New Momentum company owner Christine Shawcroft has meanwhile assured members that “there will be no expulsions”. We shall see.

About a quarter of the participants at the NC meeting argued (sometimes more coherently, sometimes less) that the committee should continue to organise the conference cancelled by Lansman. In reality of course, this would amount to a split. Among them were anti-Zionist campaigner Tony Greenstein (who accused the “old left” of offering “nothing but a council of despair”), Delia Mattis from the London region of Momentum, a comrade from Red Flag and a few others. Apparently, “local groups can function just fine” without the national organisation, according to one comrade. It is true, of course, that no membership dues find their way back to branches, there have been no real national campaigns and most definitely no support from centre. (In the run-up to the coup, Lansman initiated some quick changes, designed to make team Momentum look awfully busy, with varying levels of success.)

But it has become clear in the last couple of weeks that there is no widespread appetite for such a split. And it has to be said that the January 28 participants in favour of that option did not really present a viable way forward: split and then … do what, exactly? And with whom? As these comrades did not propose a motion and were calling for different things at different times, their arguments basically ran into the sand.

The majority – amongst both NC members and observers – were against a split, however. It was most strongly opposed by the handful of AWL members and supporters in the room. Their motion was slightly less combative than another motion presented by Alan Runswick, delegate from the North West region (when it still existed), though both were eventually passed.

The AWL motion, for example, argued that the call for a “national networking conference” is “not the ‘founding conference’ that was planned for February and which was cancelled by the coup and, while it may establish some connections or forum structures, it is not to set up a rival organisation to Momentum”.

But, thanks to some pretty impressive chairing by Matt Wrack (leader of the Fire Brigades Union), the AWL motion was taken and agreed first, which basically took the sting out of this or that formulation of Alan’s motion. For example, while discussing the AWL-inspired motion, the meeting decided – instead of electing a new steering committee, as planned – to set up a “coordinating group” to consist of the remaining members of the officially abolished steering and conference arrangements committees, plus representatives to be coopted from unrepresented regions. So, by the time we got to Alan’s motion, the conference “planned by the conference arrangements committee” had turned from the one abolished by Jon Lansman into the new (and clearly different) networking gathering agreed for March 11.

As an aside, both motions are equally deluded in one respect: both call for branches to elect and send delegates to the March gathering. Yes, 40 branches have issued motions and statements critical of the coup. But it is another matter altogether for a branch to elect and send official representatives to what will undoubtedly be presented by the right within Momentum as a ‘rival’, ‘illegitimate’ conference. Both motions seriously overestimate how many branches would be prepared to go that far. For example, Leeds, York, Manchester and Sheffield have a strong rightwing and would probably not send delegates. March 11 could end up a very small meeting indeed if the organisers do not rethink this and allow pro-democracy minorities in hostile branches to attend in an official capacity (and not just as observers).

A suggestion by the Red Flag comrade to add a clause to call for a boycott of the NCG elections was defeated with only her vote in favour. Quite a few NC members had actually argued in favour of such a boycott (among them Jackie Walker, Suzanne Gannon and Nick Wrack), but they also recognised that “some good comrades here have decided to stand” and they did not want to exclude them. Stan Keable of Labour Party Marxists was actually the only candidate present at the meeting (as an observer), though the AWL has also fielded a few candidates.

The final clause in the AWL motion was going a bit far for most comrades and was deleted: “We call on the structures created by the coup to recognise the elected national committee of Momentum and to enable the two parallel structures to come together”. That seemed like pointless wishful thinking. However, it was replaced with a no less pointless suggestion that we should send “a deputation” to meet Jon Lansman under the auspices of John McDonnell.

This suggestion had come about after an observer reported that he had run into the shadow chancellor; McDonnell had told him that he was “not happy” about the coup and that in his opinion Jon Lansman and Matt Wrack should get together to talk things through. And, yes, he would be glad to have this message passed on to others in Momentum. Let us ignore the fact that McDonnell did not contact comrade Wrack about this suggestion or that a similar meeting had already taken place after the unofficial November 5 NC meeting rejected Lansman’s previous coup attempt. Another comrade suggested in the pub afterwards that Corbyn was being “held hostage” by Jon Lansman, who had threatened to walk off with the 200,000 contacts in his database if Corbyn did not let him do with Momentum as he pleases. This seems rather hard to believe. Momentum has suffered from a lack of democracy from day one. While the precise details of the organisational structure might not have been planned out very well by Corbyn and Lansman, it is clearly not in the interest of the Labour leader to have an organisation, which is associated so closely with him, that has the potential to embarrass him – be it with the call for mandatory reselection of MPs, the fight for the free movement of people or campaigning against weapons of mass destruction in the form of Trident.

The Lansman coup was clearly designed to demobilise and depoliticise Momentum members. It is part and parcel of Corbyn’s seriously flawed strategy of appeasing the right in the Labour Party. It is no coincidence that Lansman abolished Momentum democracy on the same day as Jeremy Corbyn gave (a version of) his infamous Peterborough speech. Don’t rock the boat. Keep Tom Watson and the right as sweet as possible for as long as possible.

While there was nodding all round when Labour Party Marxists supporters argued for such a political orientation at the NC meeting, the AWL seemed to want to push the organisation towards “campaigning”. It proposed the setting up of “working groups” on the NHS, migrants rights and “expulsions/suspensions”. In our view, these suggestions range from the pointless (why would we campaign separately on the NHS, when the Labour Party and Momentum are already organising their own NHS ‘days of action’?) to the downright cynical: the AWL has, of course, already set up its own campaign, Stop the Labour Purge, and indeed it suggested in its written submission to NC members that we should “encourage local groups to host a speaker from Stop the Labour Purge”.

There was little appetite at the NC for these suggestions and they ended up falling off the agenda. Let us hope they will not be resurrected for March 11.

Momentum Grassroots: Time to up the fight

March 15, 2017 Comments Off on Momentum Grassroots: Time to up the fight 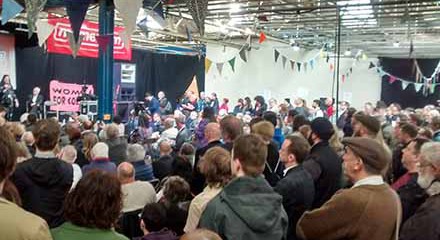 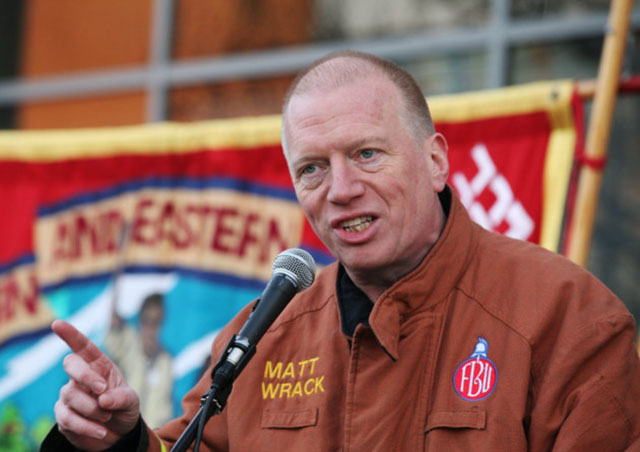 October 30, 2016 Comments Off on Video: Matt Wrack criticises the coup in Momentum