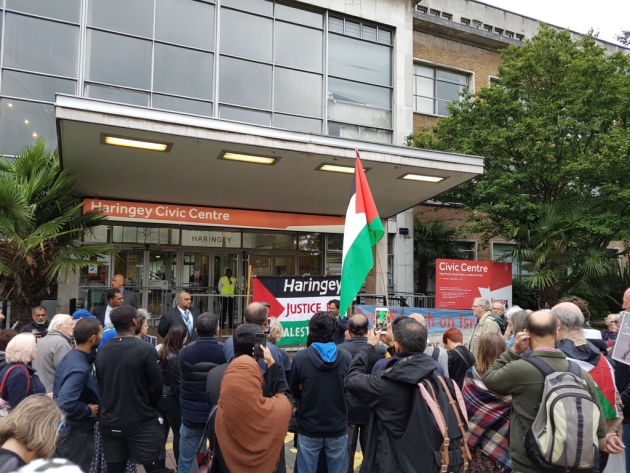 The right wing in the Haringey constituency is clearly on the warpath against the left, deploying the dirty bomb of anti-Semitism; and aided by the left-baiting newspaper The Jewish Chronicle and its seedier outrider in the form of the Campaign Against Anti-Semitism.

A July 25 posting on the CAAS website reports a fractious meeting of Haringey council where the controversial International Definition of Anti-Semitism was passed – without a debate and, it seems from the video of the proceedings, without a dissenting vote. (Although we are told that Labour councillors who opposed the move could leave the council chamber before the vote, rather than break party ‘discipline’.)

True to its gutter-level journalistic standards, the report on the CAAS site spins the protests from the public gallery as “threats” by “activists” (a term that has become an all-purpose swear word in the right’s lexicon). Likewise, The Jewish Chronicle uncritically reports Labour councillor Joe Goldberg’s tweet that “tonight I sat in full Council threatened by Labour members for voting for a motion on anti-Semitism” (July 25).

Concretely, what exactly were these “threats”? The only example that has been reported so far is one heckle from the public gallery which promised that “We will see you at your Constituency Labour Party.”

For those readers who don’t follow this crude ‘activist-speak’, this is roughly translated as: ‘We strongly disagree with what you – our elected representatives – are voting for here tonight and we will hold you to democratic account at the next meeting of the political organisation we are all members of.’

Predictably, the CAAS calls on the national party to “discipline” the “menacing rabble” of Labour members who “took part in heckling and threats” – but there is “little hope”, it sighs. (Comrades should judge the CAAS fidelity to accurate reportage after reading this effective demolition job by Tony Greenstein.)

The key to understanding why Haringey’s Labour councillors have been so keen to adopt this politically loaded definition of anti-Semitism is the background of their decision to proceed with moves to sell off swathes of the borough’s housing stock – and the impressive mobilisations of protest that have met it and in which Labour members of the left of the party have been prominent. We spoke to a leading Momentum activist in the area who told us that:

Essentially the council leadership and Haringey council – overwhelmingly Labour – are engaged in a massive privatisation of land, housing and assets, a process that they plan over time to roll out over the entire borough.

This has prompted absolutely huge opposition in the Labour Party to this proposed “redevelopment” as the right dub it. There has been a swelling tide of big lobbies, protests and demos against what the council is proposing – and as the whole process will be a drawn-out one of selling off the public assets, there is the probability that these protests will be ignited again and again.

In Haringey the Labour Party has delayed selecting candidates for borough elections in May of next year until between mid-October and the end of November this year. The right locally – Blairite, Progress, Labour First types – are very concerned that the blowback from the privatisation and the general Corbyn-inspired move to the left of the membership of the party will impact on those selections and the whole complexion of the Labour group could change. The control the right now has even over the existing cohort of Labour councillors is very tenuous: at the Labour group meeting several weeks ago, the split was 18 against getting into bed with the private contractors, just 26 or so for.

It’s in this context – of a huge battle in the borough between the left of the party and the right (with both CLPs and both Labour MPs opposing the privatisation) – that we have heard accusations of ‘anti-Semitism’ against the left – in line with similar accusations up and down the country.  That’s what I think is the motivation behind the proposal that Haringey council adopt the International Holocaust Remembrance Association definition and guidelines. (And it’s the guidelines that will potentially be used to make critical debate about Israel more difficult.)

Of course, the left has strong historical and political arguments to deploy against these garbage charges, clumsily lobbed at them by an increasingly desperate right wing. By any objective standards, we win the argument. (Although we seem to have to win without the aid of Corbyn or McDonnell – it’s high time they took a firm stance on this coarse left-baiting in their party!)

However, we should also add an observation about the core morality of people who – for what seems to amount to little more than their own personal career prospects – are prepared to cynically use and abuse the genocidal nightmare that engulfed Europe’s Jews in the 20th century.

And they dare to call us a “rabble”.