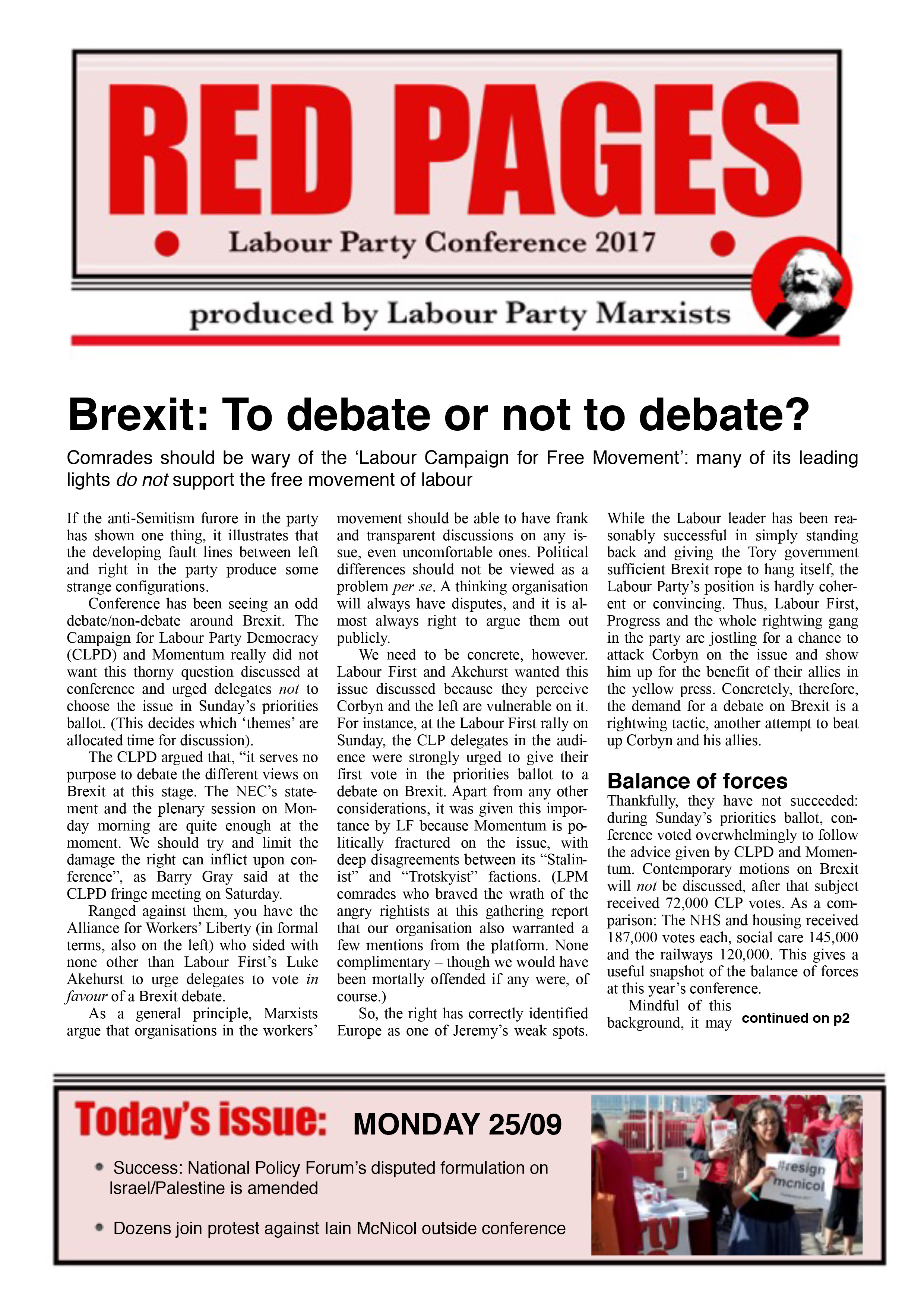 Brexit: To debate or not to debate?

Comrades should be wary of the ‘Labour Campaign for Free Movement’: many of its leading lights do notsupport the free movement of labour

If the anti-Semitism furore in the party has shown one thing, it illustrates that the developing fault lines between left and right in the party produce some strange configurations.

Conference has been seeing an odd debate/non-debate around Brexit. The Campaign for Labour Party Democracy (CLPD) and Momentum really did not want this thorny question discussed at conference and urged delegates not to choose the issue in Sunday’s priorities ballot. (This decides which ‘themes’ are allocated time for discussion).

The CLPD argued that, “it serves no purpose to debate the different views on Brexit at this stage. The NEC’s statement and the plenary session on Monday morning are quite enough at the moment. We should try and limit the damage the right can inflict upon conference”, as Barry Gray said at the CLPD fringe meeting on Saturday.

Ranged against them, you have the Alliance for Workers’ Liberty (in formal terms, also on the left) who sided with none other than Labour First’s Luke Akehurst to urge delegates to vote in favour of a Brexit debate.

As a general principle, Marxists argue that organisations in the workers’ movement should be able to have frank and transparent discussions on any issue, even uncomfortable ones. Political differences should not be viewed as a problem per se. A thinking organisation will always have disputes, and it is almost always right to argue them out publicly.

We need to be concrete, however. Labour First and Akehurst wanted this issue discussed because they perceive Corbyn and the left are vulnerable on it. For instance, at the Labour First rally on Sunday, the CLP delegates in the audience were strongly urged to give their first vote in the priorities ballot to a debate on Brexit. Apart from any other considerations, it was given this importance by LF because Momentum is politically fractured on the issue, with deep disagreements between its “Stalinist” and “Trotskyist” factions. (LPM comrades who braved the wrath of the angry rightists at this gathering report that our organisation also warranted a few mentions from the platform. None complimentary – though we would have been mortally offended if any were, of course.)

So, the right has correctly identified Europe as one of Jeremy’s weak spots. While the Labour leader has been reasonably successful in simply standing back and giving the Tory government sufficient Brexit rope to hang itself, the Labour Party’s position is hardly coherent or convincing. Thus, Labour First, Progress and the whole rightwing gang in the party are jostling for a chance to attack Corbyn on the issue and show him up for the benefit of their allies in the yellow press. Concretely, therefore, the demand for a debate on Brexit is a rightwing tactic, another attempt to beat up Corbyn and his allies.

Thankfully, they have not succeeded: during Sunday’s priorities ballot, conference voted overwhelmingly to follow the advice given by CLPD and Momentum. Contemporary motions on Brexit will not be discussed, after that subject received 72,000 CLP votes. As a comparison: The NHS and housing received 187,000 votes each, social care 145,000 and the railways 120,000. This gives a useful snapshot of the balance of forces at this year’s conference.

Mindful of this background, it may seem strange that an ostensibly left organisation like the Alliance for Workers’ Liberty should prioritise building a campaign (‘Labour Campaign for Free Movement’) that offers platforms to the likes of Tulip Siddiq (who in January resigned as a shadow minister following Jeremy Corbyn’s decision to impose a three-line whip on Labour MPs to vote in favour of triggering Article 50) and Clive Lewis MP, who has of course spoken out against free movement.

In response to Jeremy Corbyn stating publicly that he saw “no need” to curb immigration or impose more controls, Lewis said: “We have to acknowledge that free movement of labour hasn’t worked for a lot of people. It hasn’t worked for many of the people in this country, where they’ve been undercut, who feel insecure, who feel they’re not getting any of the benefits that immigration has clearly had in our economy.”

Now, it would be foolish in the extreme to argue – in the manner of a sect like the Socialist Worker Party – that mass immigration always and everywhere brings unalloyed economic benefits and social harmony to indigenous working class communities. However, this in no way implies that we should oppose the right of working people to free movement; to be able to seek a life for themselves and their families in any part of the world they choose.

The key is unity, won from below. We need to fight for the integration of migrants into the culture of struggle of a native working class (a reciprocal process of learning, of course), into common organisation and unity against our class enemies.

This voluntary, combative unity is a million miles away from what the likes of Clive Lewis advocate when they call for obligatory union membership for migrant workers (as a precondition of their right to enter the country) to stop them “undercutting wages” – a proposal motivated, he admits, by his core concern to “have an impact on the number of people coming to this country”, to “make it more difficult for employers to bring people in” and thus to push companies to “begin to take people more often from this country”. Fairly bog-standard Brit nationalism masquerading as ‘internationalism’, in other words.

The very fact of the AWL’s involvement in the ‘Labour Campaign for Free Movement’ should set alarm bells ringing for Labour comrades. This is an organisation infamous for arguing against the right of Palestinian people to free movement – concretely the right to return to areas they were forcibly ejected from by the colonialist Israeli state.

Among their leaders are people who are happy to call themselves “Zionists” and this softness on reaction saw them support the purging of Jackie Walker as vice-chair of Momentum. Their ‘fellow traveller’ on the Labour Party NEC, Rhea Wholfson, voted to refer Jackie Walker’s case to Iain McNicol’s compliance unit – and happily speaks at meetings organised by the Jewish Labour Movement, an affiliate to the World Labour Zionist Movement, a loyal supporter of the state of Israel and home to many of those who have been so keen to save the Labour Party from its ‘unelectable’ leader.

This campaign needs to be given a very wide berth. As with every other issue and debate in the Labour Party these days, context is everything.

We need a positive vision for Europe, not a pro-business one

Keir Starmer has succeeded in getting the shadow cabinet to come out in favour of staying in the single market (though in an interview on the Andrew Marr Show on Sunday morning, Jeremy Corbyn seemed to backtrack somewhat from this again). Still, there remains a striking paradox. On Europe, Labour is articulating the interests of big capital. Not that big capital will reciprocate and back the Labour Party. It is, after all, led by Jeremy Corbyn: pro-trade union, pacifistic and a friend of all manner of unacceptable leftists.

For the sake of appearances, Keir Starmer pays lip service to the 2016 referendum result. There is no wish to alienate the minority of Labour voters who backed ‘leave’. More through luck than judgement, ambiguity served the party well during the general election campaign. The contradiction between Corbyn’s historical hostility towards the EU – now represented in the Commons by the Dennis Skinner-Kelvin Hopkins rump – and the mass of Labour’s pro-‘remain’ members and voters resulted in a fudge.

However, instead of getting embroiled in the argument about what is and what is not in the ‘national interest’ – eg, staying in the single market versus leaving the single market – Labour needs a class perspective. We should have no illusions in the European Union. It is a bosses’ club, it is by treaty committed to neoliberalism and it is by law anti-working class (note the European Court of Justice and its Viking, Laval and Rüffert judgements). But nor should we have any illusions in a so-called Lexit perspective.

On the contrary the EU should be seen as a site of struggle. We should aim to unite the working class in the EU in order to end the rule of capital and establish socialism on a continental scale. That would be the biggest contribution we can make to the global struggle for human liberation. 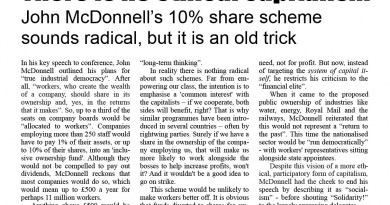