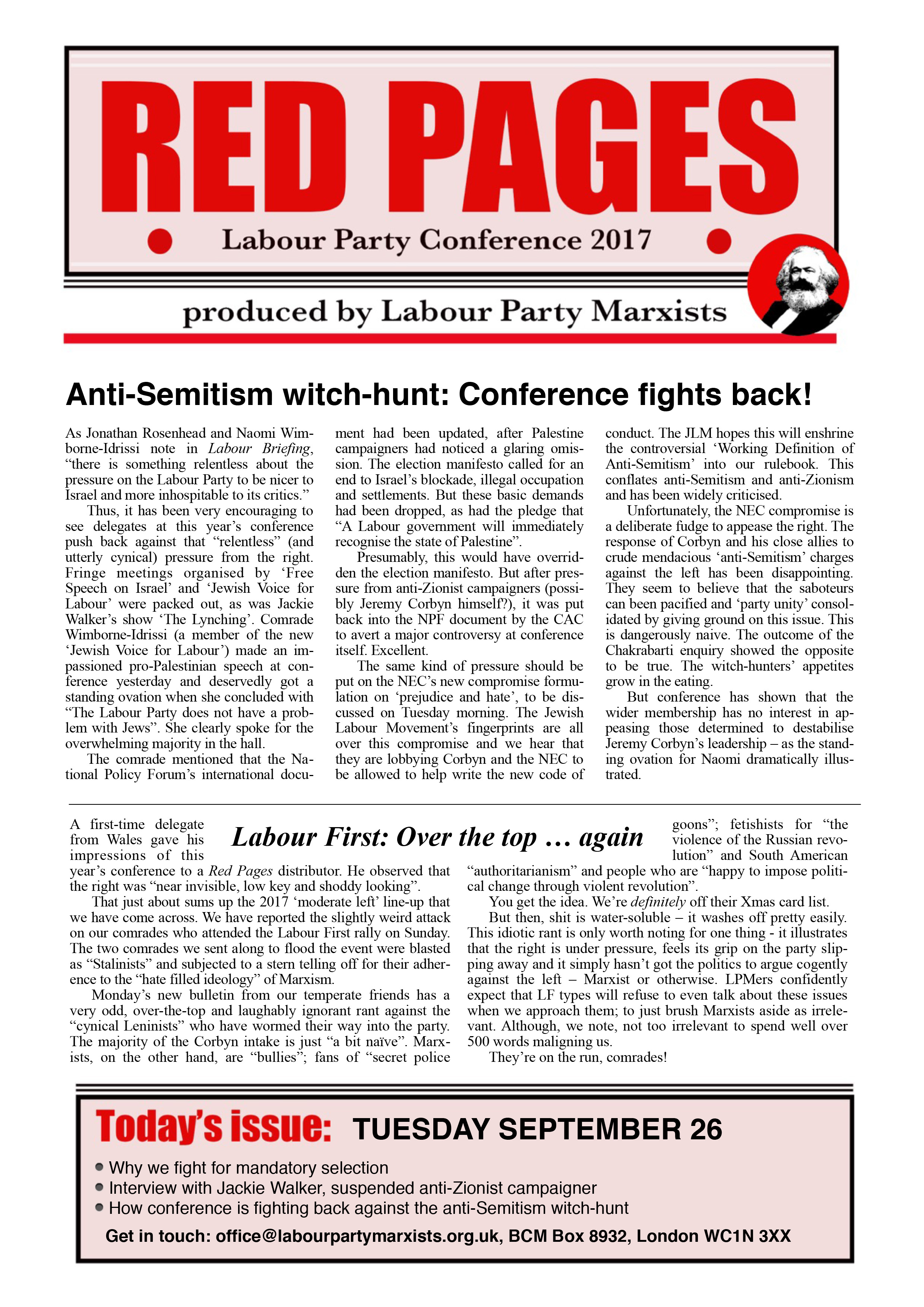 As Jonathan Rosenhead and Naomi Wimborne-Idrissi note in Labour Briefing, “there is something relentless about the pressure on the Labour Party to be nicer to Israel and more inhospitable to its critics.”

Thus, it has been very encouraging to see delegates at this year’s conference push back against that “relentless” (and utterly cynical) pressure from the right. Fringe meetings organised by ‘Free Speech on Israel’ and ‘Jewish Voice for Labour’ were packed out, as was Jackie Walker’s show ‘The Lynching’. Comrade Wimborne-Idrissi (a member of the new ‘Jewish Voice for Labour’) made an impassioned pro-Palestinian speech at conference yesterday and deservedly got a standing ovation when she concluded with “The Labour Party does not have a problem with Jews”. She clearly spoke for the overwhelming majority in the hall.

The comrade mentioned that the National Policy Forum’s international document had been updated, after Palestine campaigners had noticed a glaring omission. The election manifesto called for an end to Israel’s blockade, illegal occupation and settlements. But these basic demands had been dropped, as had the pledge that “A Labour government will immediately recognise the state of Palestine”.

Presumably, this would have overridden the election manifesto. But after pressure from anti-Zionist campaigners (possibly Jeremy Corbyn himself?), it was put back into the NPF document by the CAC to avert a major controversy at conference itself. Excellent.

The same kind of pressure should be put on the NEC’s new compromise formulation on ‘prejudice and hate’, to be discussed on Tuesday morning. The Jewish Labour Movement’s fingerprints are all over this compromise and we hear that they are lobbying Corbyn and the NEC to be allowed to help write the new code of conduct. The JLM hopes this will enshrine the controversial ‘Working Definition of Anti-Semitism’ into our rulebook. This conflates anti-Semitism and anti-Zionism and has been widely criticised.

Unfortunately, the NEC compromise is a deliberate fudge to appease the right. The response of Corbyn and his close allies to crude mendacious ‘anti-Semitism’ charges against the left has been disappointing. They seem to believe that the saboteurs can been pacified and ‘party unity’ consolidated by giving ground on this issue. This is dangerously naive. The outcome of the Chakrabarti enquiry showed the opposite to be true. The witch-hunters’ appetites grow in the eating.

But conference has shown that the wider membership has no interest in appeasing those determined to destabilise Jeremy Corbyn’s leadership – as the standing ovation for Naomi dramatically illustrated. 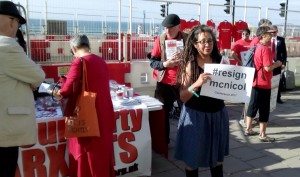 Jewish anti-Zionist campaigner Jackie Walker, suspended from the Labour Party, talked to Red Pages ahead of her widely praised show ‘The Lynching’. This was staged with much secrecy on Monday night in Brighton

Things are clearly changing in the party. So, are you expected to be reinstated anytime soon?

I don’t expect it to change soon, no. I’ve been told by somebody in the know that it could be another year before my case comes up. It will now involve a number of barristers on the Labour Party side and my solicitor. They have got to get their papers together. The state of the papers that were sent to the NEC was so appalling that they would be in bad trouble if they were distributed in a similar state again. It will take them some time to get it together.

You have been suspended for a year now; surely this cannot go on indefinitely?

You’re right; this is an outrage. My solicitor will probably have to make some kind of application under national justice soon. But there are others who have been suspended longer than me – and they don’t even know what they have been suspended for! And this is all happening on the watch of general secretary Iain McNicol.

You took part in yesterday’s protest urging McNicol to go.

Yes, but he is just one person. I think we need an overhaul of the whole disciplinary process, to ensure that it is not so easily manipulated for political interest. You would have to be a fool not to believe that behind the anti-Semitism witch hunt and the expulsions and suspensions of members is a political ideology.

Are you hopeful that so-called Corbyn review will look at these issues?

Oh yes, because if we keep the current structures we will be embroiled in this kind of nonsense forever. The data protection agency ICO had so many complaints about the Labour Party disciplinary process that enquiries now take three months to be answered – it was two weeks until recently.

What are your thoughts on Iain McNicol awarding the Del Singh memorial price for ‘best practice for a members-led affiliate’ to the Jewish Labour Movement?

It is very unfortunate. This award was established to honour a man who was a real supporter of the Palestinians. Del Singh would be turning in his grave. As I understand it, it’s the Conference Arrangements Committee that decides who wins the prize, so this just shows how right wing the outgoing CAC is. In terms of the JLM’s “best practice”, I have to remind people that this was the organisation that has allowed their official to make a secret film during a training session at last year’s conference, then sent it to the media – a provocation which got me suspended, of course.

You are a supporter of Jewish Voice for Labour, which had its inaugural meeting last night here in Brighton.

It is a travesty that the Jewish Labour Movement, a Zionist grouping, is the only recognised Jewish voice in Labour. You can bend numbers as much as you want, but there are many, many Jewish members of the Labour Party who are not Zionists and we need to have a voice too.

Are you trying to affiliate to the Labour Party?

It takes time before an organisation can affiliate. I think first of all we’re trying to grow our numbers. We are having a very positive response and I would urge everybody to get involved in the organisation. You don’t have to be Jewish to become a supporter – though you can’t be a full member unless you’re Jewish.

I hear Tony Greenstein hasn’t been allowed to join? Barring people is not a very good start…

My personal view is that this should not have happened, but I am not a member of the executive.

Is the party too broad a church?

I believe in free speech. If you have Zionists in the Labour Party, they should be able to give their view. People should be able to hear both sides. Progress, Labour First – they have the right to speak. But they should not be allowed to shut down debate and silence opinions that they don’t agree with. The party is changing, but this censorship is still going on.

Labour First: Over the top … again

A first-time delegate from Wales gave his impressions of this year’s conference to a Red Pages distributor. He observed that the right was “near invisible, low key and shoddy looking”.

That just about sums up the 2017 ‘moderate left’ line-up that we have come across. We have reported the slightly weird attack on our comrades who attended the Labour First rally on Sunday. The two comrades we sent along to flood the event were blasted as “Stalinists” and subjected to a stern telling off for their adherence to the “hate filled ideology” of Marxism.

Monday’s new bulletin from our temperate friends has a very odd, over-the-top and laughably ignorant rant against the “cynical Leninists” who have wormed their way into the party. The majority of the Corbyn intake is just “a bit naïve”. Marxists, on the other hand, are “bullies”; fans of “secret police goons”; fetishists for “the violence of the Russian revolution” and South American “authoritarianism” and people who are “happy to impose political change through violent revolution”.

You get the idea. We’re definitely off their Xmas card list.

But then, shit is water-soluble – it washes off pretty easily. This idiotic rant is only worth noting for one thing – it illustrates that the right is under pressure, feels its grip on the party slipping away and it simply hasn’t got the politics to argue cogently against the left – Marxist or otherwise. LPMers confidently expect that LF types will refuse to even talk about these issues when we approach them; to just brush Marxists aside as irrelevant. Although, we note, not too irrelevant to spend well over 500 words maligning us.

They’re on the run, comrades!

MPs, like all our reps, must be under democratic control from above, by the NEC; from below by the CLPs. Unfortunately, this year’s conference will not hear any motions on the subject – though at least two have been submitted to the 2018 conference. Whatever happens in Brighton, this is a key issue for the left and must be part of the ‘Corbyn review’.

Mandatory reselection terrifies the right. For decades, sitting Labour MPs enjoyed a job for life. They might visit their constituency once or twice a year, deliver a speech to the AGM and write the occasional letter to a local newspaper. Unless found guilty of an act of gross indecency, they could do as they pleased.

With the insurgent rise of Bennism that situation was challenged. The Campaign for Labour Party Democracy committed itself to the fight for mandatory reselection of MPs, finally agreed by the 1980 conference. What this saw, however, was not a Labour Party equivalent of the Paris Commune or the Russian soviets, as our friends in Progress foolishly warn on their website. There was no right to instant recall. Nevertheless, once in each parliament, our MPs had to get the endorsement of the local local party and trade union branches. Under Neil Kinnock, this was watered down and eventually today’s trigger ballot was introduced in the 1990s, which makes it significantly easier for MPs to defend their positions.

Clearly, this process is badly flawed. The ‘checks and balances’ that delay and complicate members ability to ‘sack’ the people who are meant to politically represent them and their constituency should be abolished. We need a system of true mandatory selection.

Two rule change motions (from International Labour and Rochester and Strood CLP) that would introduce this mandatory selection of MPs have been voted through CLPs in time for conference 2017 – but in accordance with one of the plethora of undemocratic clauses in the LP rule book, these motions have now been ‘parked’ for almost 14 months before they can be finally discussed by delegates at next year’s conference.

IL’s motion would delete any reference to ‘trigger ballots’ in the rule book and introduce a very simply system, where “The sitting Member of Parliament shall be automatically included on the shortlist of candidates, unless they request to retire or resign from the PLP. The CLP Shortlisting Committee shall draw up a shortlist of interested candidates to present to all members of the CLP who are eligible to vote.”

This is very simple, very fair and eminently supportable!