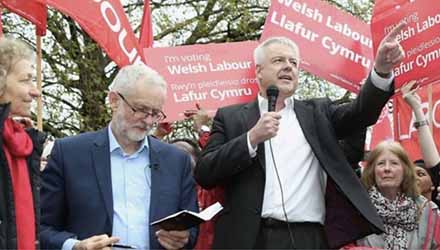 Jeremy Corbyn was the first Labour Party leader to be elected under the ‘one member, one vote’ system. Welsh Labour might well follow this lead. Its April 20-22 Llandudno conference agreed to review how it elects the Labour leader in Wales – something which became particularly urgent after Carwyn Jones dramatically announced his resignation in his final speech to conference. Elections are due in the autumn.

Under existing rules the leader is chosen through an electoral college system that gives equals votes to (1) members, (2) the unions and other affiliated organisations, and (3) MPs, MEPs and AMs. While Unison and the GMB are keen on retaining their union block votes, they have talked about reducing the vote wielded by the politicians or eliminating it in its entirety. Others, however, including Mark Drakeford – finance secretary in the Welsh government and a candidate to succeed Carwyn Jones – are campaigning for Omov.

Who emerges as the new leader will obviously depend on the election system. But some idea of the balance of forces can be gleaned from Llandudno.

It is unlikely any trend or group would have left conference fully satisfied. “A score draw,” some comrades I spoke to reckoned; “2-1 to the right, but with the second half still to come”, was the verdict of another leftwing delegate. A deep fault line runs between the rank and file, which is left-leaning, and most union bureaucrats, councillors, assembly members, etc, who are still dominated by the right. Whereas the rank and file identify with Corbyn, the officialdom is determined to distance itself from the UK leadership.

Superficially, the bare facts of the conference appear to support a sober assessment for the left. Its candidate for the new post of deputy leader in Wales was defeated. Two motions addressing the electoral college system that delivered this victory for the right were rejected by the standing orders committee (SOC) in the run-up to Llandudno, and energetic lobbying at the event itself by comrades from the Constituency Labour Parties and Welsh Labour Grassroots/Momentum could not reverse the SOC’s ruling.

In November of last year, the Welsh executive committee (WEC) adopted the electoral college for leader and deputy leader elections. The WEC’s contempt for the membership it purports to serve was illustrated by the high-handed way it ignored the pro-Omov submissions from 19 of the 27 CLPs which responded to the membership consultation that itactually initiated.

The anger this sparked on the left is all the more understandable when you look at the victory margin for the right’s candidate for deputy leader, Swansea East MP Carolyn Harris. The result was 51.5% for Harris and 48.5% for the left’s candidate, Julie Morgan. (Their current locations on the political spectrum are relative and highly mobile, it must be said.)

However, burrow deeper into the detail and the real story of the deputy leadership election emerges. In terms of the combined 16,819 votes cast, Morgan had beaten Harris by 9,110 votes to 7,709. Particularly significant was that in the members’ section Morgan won by 6,244 votes to 3,336 – a ratio of almost 2:1 (although on a disappointing turnout of 38.2%).

It was the weighted electoral college system that had swung it for Harris, to the anger and frustration of many. The sections for elected representatives and unions, etc have been so far the least affected by the changes that have come with Corbyn.

Leftwingers are naturally annoyed that their votes were swamped. One particular statistic that is being bitterly repeated by comrades is that the vote of one elected AM or MP is worth the vote of 400 ranks-and-file members.

There is no question that the campaign for Omov – pushed energetically by many CLPs and members in the branches – will have received a boost from this widely discredited election. The notion that our elected representatives should command such a disproportionately huge influence is clearly absurd. By definition, our MPs, MEPs and AMs are the most susceptible to the seductions of power. They are the people who we really need to keep an eye on.

Tactically, it may be correct to support Omov at this stage in the fight in Welsh Labour. It would certainly make short work of the current leadership of Welsh Labour and install a pro-Corbyn team. However, as a general principle we should be against plebiscites in the party – for electoral contests or otherwise. Comrades should remember that the move to Omov for the election of the party leader began with the likes of Neil Kinnock and John Smith, and culminated in Ed Miliband’s Collins review – it was a rightwing ploy to dilute the working class nature of our party. 1)https://weeklyworker.co.uk/worker/1000/labour-unions-vote-to-be-distanced/

Comrades should bear in mind the farce that was John Lansman’s Momentum coup, cynically wrapped as it was in a veneer of ‘democracy from below’. In fact, this pseudo-inclusive manoeuvre crushed the embryonic democratic structures of the organisation and substituted online voting of the entire, atomised and easily steered membership. Omov in Lansman’s hands was the vehicle for a profoundly undemocratic plot against the interests of the membership – one that stymied Momentum’s potential to be an effective, dynamic left trend in the party.

Moreover – despite our recent negative experience in Wales – it is in general an enormous strength of the Labour Party that it has the affiliation of important unions. It is pleasing that no comrades here seem to have had a ‘Christine Shawcroft moment’2)Specifically, her outburst on Facebook: “It is time to support disaffiliation of the unions from the Labour Party” – questioning Labour’s historic links with these vital working class institutions. In fact, as part of the democracy review that was won at the Llandudno conference (see below), we should include a commitment to a vigorous national campaign to affiliate all unions to Labour – a development that would go a huge way to making the party a genuine united front of the working class.

That would require rank-and-file initiative in the unions; hard campaigning work and persuasive arguments; and – crucially – a thorough-going democratisation of the unions from top to bottom.

Despite the results of this year’s conference, there were positive developments that could open up real opportunities for the left.

Firstly there is Mark Drakeford. He is, of this moment, the bookies’ favourite. Drakeford has a long history on the left in Wales and has been a consistent supporter of Corbyn.

Certainly, he could hardly be more inconsistent than the outgoing Blairite incumbent and supporter of Syrian air strikes, Carwyn Jones. The Jones ‘brand’ was undoubtedly tainted by his and his team’s handling of charges of inappropriate sexual conduct against Carl Sargeant, a Welsh government minister – resulting in the man’s suicide in November last year. But politically, Jones had already lost a great deal of authority, given the nature of the general election campaign that official Welsh Labour had foisted on the membership in June 2017.

This was clearly devised to dramatically distance the party in Wales from the leadership in London – Corbyn and McDonnell in particular. The Cardiff HQ drew up a different election platform, and pictures of Corbyn on official material were rarer than dragon’s eggs. Many rank-and-file members were angry at this sidelining of the leader and made their views known with some energy.

Other encouraging developments for the left came out of this year’s conference:

I have already referenced the democracy review. The motion for this was moved by delegate Sue Hagerty and her call for the initial phase of the process to be completed this summer, ending with a special conference on the leadership election method in advance of the election itself, needs to be vigorously supported by the membership (especially because – while this proposal was very popular with delegates – worryingly, the final decision rests with the incoming Welsh executive).

The motion passed with very few dissenters and so comrades in Wales now have an opportunity to discuss this pivotal issue. Although the remit of the democracy review in Wales only covers issues specifically devolved to the WEC (which, happily, include the election format for leadership and deputy leadership elections), the logic of the discussion must take us far beyond these parameters and towards a permanent, democratic and militant organisation of the rank and file in Wales and beyond.