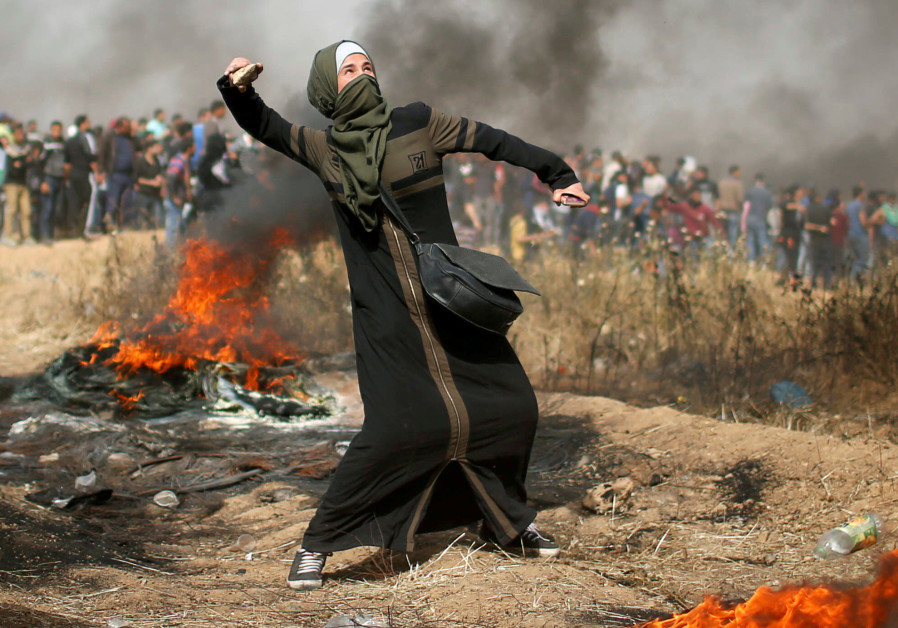 On the 70th anniversary of the nakba, Moshé Machover notes a remarkable piece of hypocrisy

this article first appeared in the Weekly Worker

The besieged people of Gaza have been marking the 70th anniversary of their dispossession and ethnic cleansing, the nakba, by a series of unarmed mass demonstrations – a largely symbolic attempt to assert their right of return and break out of their repeatedly ravaged cage, the world’s largest concentration camp. Israel, for its part, has also been marking the anniversary: it has deployed well-trained marksmen, instructed to kill or maim those daring to approach the prison fence, using ammunition designed to cause horrendous injuries. 1)For evidence suggesting the use of expanding (‘dumdum’) bullets, see the Médecins Sans Frontières report of April 19, ‘Palestine: MSF teams in Gaza observe unusually severe and devastating gunshot injuries’: www.msf.org/en/article/palestine-msf-teams-gaza-observe-unusually-severe-and-devastating-gunshot-injuries. See also Satar on Twitter: https://twitter.com/Satar_Gaza/status/982562328477683713.

The British media have hardly reported on this ongoing massacre: they have been too busy accusing Labour Party members supporting Palestinian rights of ‘anti-Semitism’. The main Israeli media (with the honourable exception of Ha’aretz) and the overwhelming majority of Hebrew Israelis, have been wholly supportive of ‘our children’, who are ‘defending’ the beleaguered homeland against ‘terrorists’ threatening its destruction. This moral blindness – the inverted perception of who is the victim and who is the oppressor – pervades Israeli Hebrew society, from the ideologues at the top right down to the ‘Kill all Arabs’ mob.

But in this month of nakba anniversary I would award the first prize for a combination of hypocrisy, cynicism and lack of self-awareness to brigadier general (retired) Ephraim Sneh, a former Labor Party minister and currently head of the Strong Israel mini-party. So, in Israeli terms, he belongs to the centre, or even centre-left, rather than to the extreme right.

In an article published on May 7, he proposes what he obviously wants to be regarded as a fair historical deal between the worldwide “Jewish people” and the Palestinian Arab people. He sets up an apparent equivalence or symmetry between two conflicting claims over the whole of the “Land of Israel” (that is, pre-1948 Palestine). And he urges both sides to give up their right to return to certain parts of it:

… anyone wishing to advance an agreement in the Land of Israel – and such an accord is ineluctable – must create a narrative of conciliation, built not on ignorance, but on an understanding of the sensitivities of the other side …

The most sensitive and loaded emotional issue for both sides is their historical affinity to this land, in its entirety … Palestinians must understand that the cradle of the historical legacy of the Jewish people lies in the heart of the West Bank. Jeremiah and Amos did not prophesise in Bat Yam or Holon, but in Anatot and Tekoa. Our national past is rooted in Shiloh and Beit El, on the road to Efrata.

Yes, we have a right to return to these places. However, all Israelis who support a two-state solution and a division of this land relinquish the exercising of this right, even at the heavy, but unavoidable, cost of evacuating tens of thousands of Israelis who have exercised this right. This concession is aimed at enabling a peaceful life in the Land of Israel, which includes a Jewish and democratic state on most of its territory.

The Palestinians cleave to the ‘right of return’, but they have relinquished the return. Abbas said so publicly with regard to his family home in Safed, attracting heaps of abuse from Hamas. They know refugees will not return to live within the boundaries of a sovereign State of Israel. There is a reason Hamas finds it difficult to mobilise masses to participate in its provocative displays on the Gaza border. However, when they say ‘right of return’, the Palestinians are referring to their historical affinity with Jaffa, Lod, Ramle and hundreds of villages that were abandoned in 1948. We as Israelis must understand and respect that.

One must distinguish between a right and its realisation. A narrative of conciliation can be built on the understanding that for the sake of coexistence between two national entities in this land both sides relinquish the exercising of what each one of them sees as their historical right.2)E Sneh, ‘The mutual right of return’ Ha’aretz May 7: www.haaretz.com/opinion/.premium-the-mutual-right-of-return-1.6060664

Note that in his hypocritical advocacy of ‘sensitivity’ there is no recognition that the Palestinian people have been the victims of Zionist colonisation and ethnic cleansing by Israel. He refers to their right of return in scare quotes, making it seem suspect. But his claim of a Jewish right of return is apparently in no need of any reservation. His sense of history makes one gasp in amazement. He forgets to mention that the Palestinians were deliberately exiled from their homeland by Israel, within living memory. 3)See Moving Forward special nakba issue, May 1 2018: http://fowardd.com/editorial/unearthing-truths-israel-the-nakba-and-the-jewish-national-fund. Not even the most ardent Zionist could claim that the Palestinian Arabs expelled the Jews from their homeland, many centuries ago. The widespread story is that the Jews were expelled by the Romans; but as a matter of historical fact this is a myth, for which there is no evidence. There was no expulsion. 4)A useful summary of the well-established contrary evidence is in Shlomo Sand’s The invention of the Jewish people (London 2009).

Note that the “heavy but unavoidable cost” that he is prepared to concede is that of “evacuating tens of thousands of Israelis who have exercised [the] right” to colonise the occupied West Bank. So the vast majority of the 800,000 settlers should continue to exercise their divine right to steal the land of the indigenous Palestinian people.

Sneh is so devoid of self-awareness and so full of self-righteousness that he wants us to accept that the Palestinian right over the homeland of which they were dispossessed in his own lifetime is inferior to that of the “Jewish people”, which is based on an ancient religious myth. He proposes a partition of “the Land of Israel” (aka Palestine), in which “a Jewish and democratic state [would keep] most of its territory” in exchange for allowing its indigenous people to hold on to the fragmented leftover.

But this piece of chutzpah is the best you can expect even from a relatively moderate Zionist.

4. A useful summary of the well-established contrary evidence is in Shlomo Sand’s The invention of the Jewish people (London 2009).