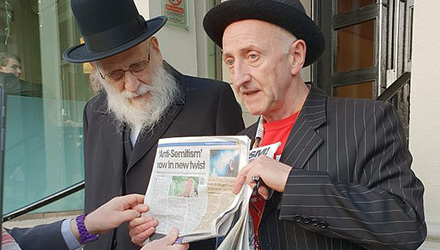 The use of the IHRA ‘definition’ of anti-Semitism to expel a union activist marks a new low, writes David Shearer

On March 6, a shameful precedent was set when it was confirmed that Peter Gregson, a GMB shop steward in Edinburgh, has been expelled from his union for his political opinions.

In September 2018 Gregson launched a petition for Labour members, which has been signed by almost 1,600 people, declaring Israel to be “a racist endeavour”. This was, of course, intended as a direct challenge to Labour’s adoption of the International Holocaust Remembrance Alliance so-called ‘definition’ of anti-Semitism, which lists precisely this expression among its ‘examples’, along with six other forms of criticisms of the Israeli state. According to the IHRA, all seven such examples are ‘anti-Semitic’.

His appeal against expulsion was heard on March 5, and the following day he was informed by the GMB’s central executive council that it had been rejected. The CEC letter states: “whilst you have every right to your freedom of speech, … you continued to post online and send emails against the decisions and policies set out by the governing authorities of the union …” In other words, “your freedom of speech” doesn’t apply when we tell you to shut up.

Gregson comments: “I have been expelled for breaching the IHRA definition of anti-Semitism, for I failed to ‘cease and desist’ in promoting ‘anti-Semitic views and material’, when I was told to by the GMB Scotland secretary … and am therefore in breach of the rulebook.”

I will return to the details of the case below, but first it is necessary to outline the reasons why this decision is particularly outrageous. The aim of a union is to organise all workers in a particular sphere of employment, irrespective of their political views. Whereas a party is obviously defined by its politics, and clearly must have the right to decide which particular political opinions are compatible with its overall trajectory, that most certainly does not apply to unions.

The reason for this is obvious. While we must aim to win over the vast majority of union members to principled working class politics, the necessity for such political organisation will become clearer as a result of workers initially accepting their common class interests, as opposed to those of employers and the bourgeoisie in general. So unions must not vet members for their political opinions: it is to be accepted that these will vary enormously and – especially in the current climate, where forms of populist nationalism are on the rise – a minority of workers will have racist and even fascistic views.

However, these should only result in disciplinary action if it is clear that they have impacted directly on union organisation. If, for example, a member of a far-right grouping was elected as a local union official and began discriminating against black or other members, that person would have to be removed from their post (preferably through the actions of the local membership). But expulsion must only be implemented as a last resort – if, say, a member, whether as a result of their political views or not, attempts to sabotage agreed union actions and is clearly working against the interests of the overall membership.

It goes without saying that this is not such a case – to put it mildly – with Peter Gregson. The rightwing leadership of the GMB is in reality importing the Labour witch-hunt into the union – it adopted the IHRA ‘definition’ itself immediately following its adoption by Labour’s national executive on September 4, so that now, in the union as well as the party, anything but the mildest criticism of Israel is declared to be “anti-Semitic”.

In addition to spreading the message that Israel is a “racist endeavour”, Gregson was also found guilty of breaching another IHRA ‘example’: “Accusing the Jews as a people, or Israel as a state, of inventing or exaggerating the holocaust”. He admits that he has accused Israel (as opposed to Jews) of “exaggerating the holocaust” and quotes the former Israeli minister of education, Shulamit Aloni, who said in an interview: “Well, it’s a trick – we always use it. When from Europe somebody is criticising Israel, then we bring up the holocaust …” But Gregson adds: “I most definitely do not accuse [Israel] of exaggerating the numbers – six million Jews died in the crime of the century.”

Just for good measure, Gregson – who is also “under investigation” by the Labour Party – was found “guilty of a direct attack on one of the GMB’s employees”. No, not a physical attack – he had “singled out” for criticism Rhea Wolfson as the person most likely to have initiated the disciplinary action against him. He stated (correctly) that Wolfson, a leading member of the Jewish Labour Movement, is “an avowed Zionist”. As a result he was accused of “targeting” her “because she is Jewish”.

It goes without saying that, while Gregson is not anti-Semitic, he can certainly be criticised for his eccentric politics – in the words of Jewish Voice for Labour, he is a “loose cannon”. For example, he admits that his initiative can be described as a “death-wish” petition, in that it is “sticking two fingers up to the NEC” by “brazenly breaking the IHRA rule”. He adds: “It is important now for more of us to come out and openly breach the IHRA, whilst never being anti-Semitic in the true sense of the word.”

Such brazen defiance is a matter of tactics, of course, but it must be said that in current circumstances it is not exactly a wise move. Firstly, the forces opposing the witch-hunt are extremely weak and are hardly in a good position to mount a successful challenge of this sort. Secondly, the “death-wish” petition does the right’s work for it by identifying hundreds of Labour members as easy targets.

Gregson also makes himself a target through his inappropriate choice of words. For instance, he has claimed that “Jews” in Britain have “leverage” because of what he describes as a general feeling of guilt over the holocaust. When this clumsy phrasing was criticised by JVL – surely it is the Zionists, not undifferentiated “Jews”, who would try to turn any such sentiment to their advantage? – he was not prepared to admit his error or change his wording. His response is: “… we suffer in the UK from holocaust guilt. Thus, all Jews have leverage, whether they want it or not, because all Jews were victims.”

However, we must not let this hold us back from defending him.He is a victim of a rightwing witch-hunt, aimed at defeating the left and regaining control of the party for the Blairites.