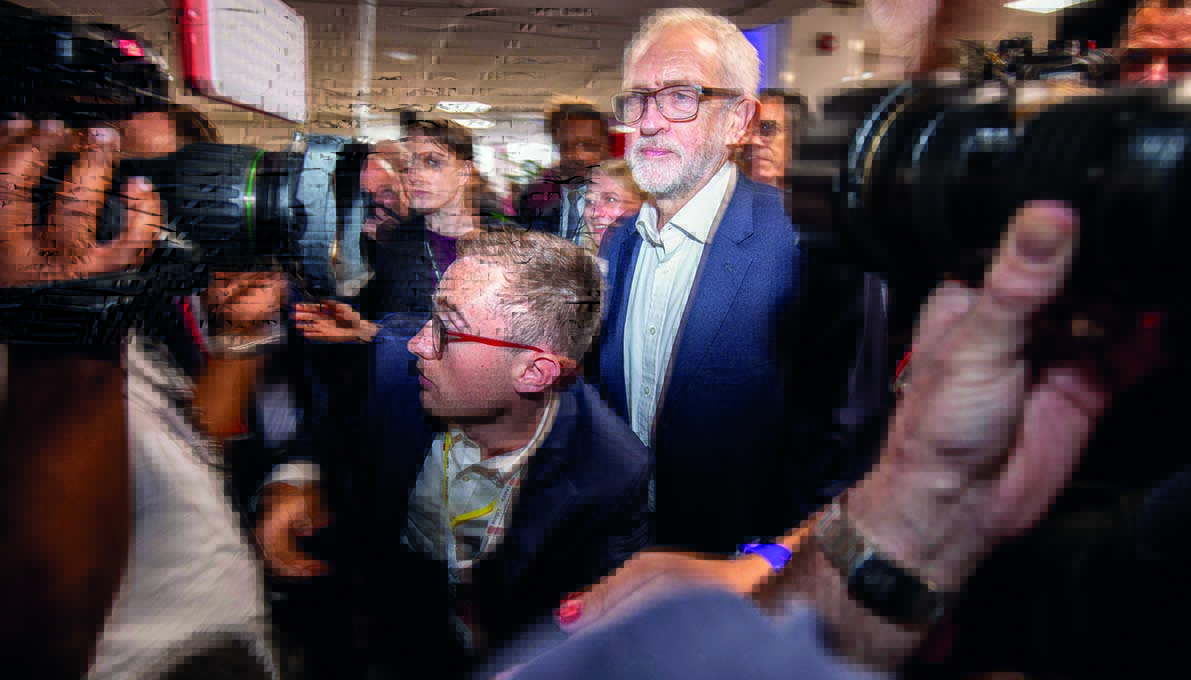 One of the benefits of receiving dozens of emails from various layers of the Labour Party during this election campaign is a clear sense of the leadership’s overall pitch to its own members.

The impression you get is of a siege mentality, particularly in relation to the media. Thus a mass email with Jeremy Corbyn’s name all over it the morning after the leaders debate, noting that £100,000 had been raised after the performance. “If we’re going to take on the billionaire media and Boris Johnson’s billionaire backers, it’s going to take more than that,” the Dear Leader wisely noted. At the manifesto launch, Corbyn openly challenged the bourgeois media to do its worst.

This attitude is welcome and appropriate, of course, and, as I write, the possibility is not excluded that it will ‘work’ and cause a dramatic upset. There is a real danger, however, that it is too little, and far too late – at least to make much difference to the result of the December 12 election, or to the shape of the government that emerges from it.

For the Corbyn leadership’s attitude to the bourgeois media has been conciliatory and occasionally cringe-inducing. We have sat through far too many attempts to appear ‘responsible’, when it comes to the economy, promises to ‘balance the budget’, apologies for their more hair-raising bits of past leftism.

On the other hand we have had attempts to ingratiate, rather than detoxify, of which Corbyn’s appearance on The last leg in a full-length, snowy-white pimp coat is the most striking; but more generally the Corbyn movement has attempted to make use of ‘non-traditional’ outlets of various sorts, from social media in general to encouraging an ecosystem of Labour-supporting news sites of varying quality (Skwawkbox, The Canary and so on). Corbyn and McDonnell even showed up in the football magazine When Saturday Comes, to promote their football-related manifesto pledges and make awkward banter about their Arsenal and Liverpool commitments.

It must be said that this strategy has not, in the end, succeeded in seriously threatening the mainstream media narrative. The recent absurd non-scandal about whether Corbyn watches the queen’s Christmas message or not is a case in point: if he does not, he is hardly alone in the Britain of 2019, so why even respond to such frivolous questions? But, even if he had demanded the ITV presenters stick to serious matters, it would have been pitched as his being ‘evasive’. The Skwawkbox-type operations will denounce this absurd deviousness on the part of the mainstream media, but they are nonetheless dragged into treating such absurdities seriously by responding to them.

The clearest example, however, is the hysteria over the Labour Party’s supposed ‘anti-Semitism’ problem. Though the agenda issues ultimately from the US state department and – concurrently – an Israeli establishment facing a pile-up of bad PR from small matters like the collective punishment of Gazans and unending far-right governments, it is the media that retails the lies. And lies they are: despite years of dragnet-fishing, even Jesus could not feed so many hungry hacks with such a meagre catch of actual anti-Semites.

Throughout this sorry saga, Corbyn and co have capitulated again and again. These lies have never been denounced. Natural justice was left in smoking ruins, for the sake of looking sufficiently penitent before the degenerate persons in the press gallery. There might have been a rationale for justifying this if capitulating had actually worked, and the sting had been drawn from the issue of Zionism and by extension Corbyn’s state-loyalism. It might then have gone down in the history books like other dishonourable compromises, like the mouths Nye Bevan stuffed with gold to get the national health service set up. Instead, lies gave way to grovelling, and grovelling to new lies; and ally after ally was thrown under the bus. It did not work. It was worse than a crime – it was a mistake, as was once said of Napoleon’s invasion of Russia.

This all goes back to the contradictions at the heart of the Corbyn moment, and thus to the beginning of his run at the leadership four and a half years ago. A complacent Labour right helped put him on the ballot to make the whole affair seem more democratic – they had already taken steps to turn leadership elections into something resembling American primaries. This turned out to be an epic tactical blunder, and years of pent-up frustration – fuelled by anger at the manifestly unjust aftermath of the financial crisis that saw the elite shake out fine, while the rest of us suffered – spilled into a spontaneous mass movement.

This presented the British labour movement with a historic opportunity, but it did so at a moment of profound weakness. The radical left was divided between the remnants of the various Marxist grouplets and the even-more-fissile identity politics that tended to replace them. Union membership was at a low ebb. The local Labour Party organisations, into which these new members were thrust, were in disarray after decades of bureaucratic obstruction. The leadership now belonged to the left, but the machine and the parliamentary party to the right, and so life at the grassroots was choked off by the desperate police actions of the old guard. In Labour Party Marxists, we called – indeed, starting before the Corbyn movement – for the democratic transformation of the Labour Party, but the priority for everyone else was a Labour government with Corbyn in No10, with the result that this institutional disrepair has never been addressed seriously.

One aspect of that disrepair – and a very long-standing one – is the weakness of our own media. The Labour Party itself has made apparently no efforts on this front at all – the exhortations of the campaigning office into our inbox will have to do. The papers and wider output of the far left are increasingly dominated by delusional cheerleading for ephemeral protest movements, often of very dubious politics (wide-eyed enthusiasm for the protests in Hong Kong and les gilets jaunes in France, despite the obvious participation of the far right, spring to mind). The closest thing to a bright spot is probably the Morning Star, which has improved in quality – admittedly from a very poor starting position – but it is hamstrung by its absolute unwillingness to criticise the Labour leadership at all, even when it contradicts other deeply held convictions of the Star and its Communist Party of Britain, such as over Brexit.

The shiny new Corbynista outlets are not a long-term solution to this problem, because they are over-fitted to this situation. The refusal to confront the question of the party and the labour movement’s domination by the bureaucracy means working around or outside of such structures, and in effect means the multiplication of fiefdoms. The most striking example of this is not a media outlet, but Momentum – or, to give it its proper name, Momentum Campaign (Services) Ltd – proprietor: J Lansman. Yet it is equally true of The Canary, Skwawkbox and co, which are basically beholden to one or another member of King Jeremy’s court in completely opaque and unaccountable ways.

Social media is not the answer either, because Facebook and Twitter are no less in enemy hands than The Daily Telegraph; moreover, it is plain that the ‘wild west’ era of content on these platforms is coming to an end, and moral panics over the far right (and even genocide in Myanmar) are the thin end of a wedge that implies far more pervasive policing of content and subservience to the state.

In truth, the bourgeois news media is having a sticky moment. It is broadly untrusted. Quality of output is way down after decades of cost-cutting exercises; hastily rewritten wire copy and industrially extruded clickbait predominate. The most partisan outlets within it do better – the Daily Mail and Fox News, sure, but The Guardian reached profitability recently on the back of an unending drive for donations and, while it is hardly our idea of a leftwing paper, it is more so than any of its competitors – but only within its immediate target markets. Various attempts at cordons sanitaires around ‘unacceptable’ political outcomes – Corbyn, Brexit, Trump – have failed. The backlash against social media companies, meanwhile, is also in full swing.

In theory, this is a promising situation for the workers’ movement to build up its own organs of mass communication. Unlike the bourgeois media, workers’ media are dependent neither on advertisers nor state largesse; they thrive, if thrive they do, on the creative energy of our movement’s partisans in service of our goals and each other. In a vibrant, democratic movement, the possibilities are very great to supplant bourgeois sources as the media of first resort; and there is no reason why we should stop merely at the level of publications. After all, the structure of the new internet platforms – as this paper has argued repeatedly – is determined no less by capitalist political economy. We should take seriously, for example, this question: what would a search engine that did not ultimately make money by advertising brokerage look like?

Just as Corbyn and co took for granted the structure of the Labour Party, and left the right in charge of its little power bases for far too long, so it refused to denounce the structurally necessary lies of the media. Whatever the December 12 result turned out to be, that was an error in the long-term view, and it remains for us to correct it.