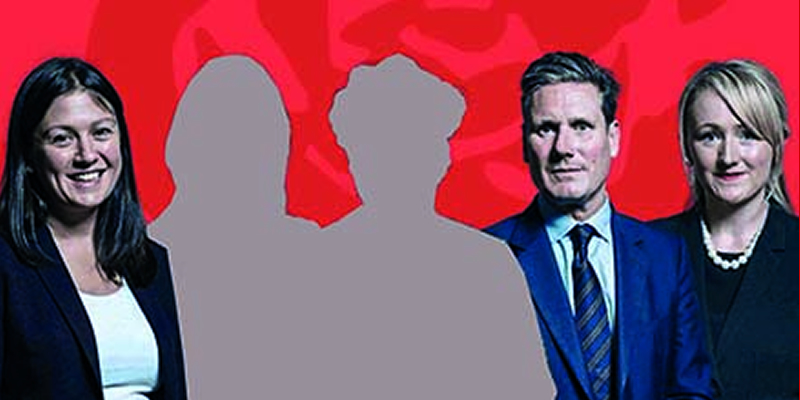 What should be the attitude of Marxists to the Labour leadership contest?

2. We are committed to the complete transformation of the Labour Party, forging it into a permanent united front of the working class and equipping it with solid Marxist principles and a tried and tested Marxist leadership. Such a perspective can only be realised with a mass Communist Party. Needless to say, we envisage once again opening up the Labour Party to the affiliation of leftwing groups and parties – crucially the affiliation of the CPGB.

3. Whatever the rightwing media claimed, Corbyn is not, and never was, a Marxist. He was and remains a sincere, but dithering, left reformist. His Straight Leftist advisors proved to be a source of weakness, not strength. The common sense of ‘official communism’ is to bring on board, to placate, to tack to the right. A proven recipe for defeat.

4. We never expected the election of a Corbyn-led Labour government. There was, though, an outside possibility of such a scenario. Such a government would not have been able to deliver the very modest promises contained in It’s time for real change, the December 2019 election manifesto. The Corbyn leadership was committed to reversing austerity, increasing the economic role of the state, repealing some anti-trade union laws and introducing some minor constitutional reforms. At best that amounted to an illusory attempt to run British capitalism in the interests of the working class. Meanwhile, in the name of It’s time for real change, wage-slavery would continue, Britain would remain a monarchy, subject to judge-made law, one of the ‘Five Eyes’, a core imperialist power, a member of Nato and armed with US-controlled nuclear weapons. To call such a programme ‘socialist’ is to violate the commonly accepted language of the left.

5. If by chance a Corbyn government had happened, we predicted there would have been a run on the pound, sabotage by the Labour right, a constitutional coup, an army mutiny, a US ‘push back’, etc. Given the continued hold of constitutionalism, narrow trade unionism and ephemeral protest politics, resistance would surely have proved feeble and ineffective, and ended in a demoralising defeat.

6. The results of the December 2019 general election were no surprise. Opinion polls always showed a clear Tory lead. Boris Johnson and Dominic Cummings skilfully played the election as being about ‘Getting Brexit done’. The Brexit Party’s support crumbled and predictably went over to the Tories. Labour lost votes in the north and the Midlands. Labour’s share of the poll was greater than in 2010 and 2015. Nonetheless, compared with 2017, it dropped by 8%. A shaft of light amidst the gloom: Labour won by far the biggest share of the 18-24-year-old vote. The Tory vote increased by just 1% – enough though, given the ‘first past the post’ system, to give them a commanding 80-strong majority in the House of Commons. We should expect Brexit negotiations to drag on for years. It is unlikely, however, to become the kind of issue it was between June 2016 and December 2019: we saw huge mobilisations on both sides, the fall of prime ministers, repeated government defeats in parliament and the purging and splitting of parties.

7. Meanwhile, we should expect legislation against trade union action on the rails, moves to outlaw local councils supporting BDS and maybe official regulations characterising anti-Zionism as violating official anti-racism, closely associated with terrorist tendencies and therefore notifiable to the Prevent bureaucracy. War in the Middle East, especially if it involves Israel, can only but increase the intensity and scope of the ‘Anti-Zionism equals anti-Semitism’ smear campaign. Anti-imperialism and anti-capitalism could easily fall into the net too. To a large extent this is the result of the hugely successful international campaign to label as anti-Semitic anything critical of Israel – a campaign that has been most thoroughly and visibly implemented in Britain’s Labour movement. But it is also bearing fruit in Germany (where the BDS movement has been declared anti-Semitic), France and the US presidential race.

8. Labour’s results in December 2019 were in parliamentary terms on a par with 1935. Except, of course, in 1935 Labour faced a national government. It should also be added that in 1935 Labour’s share of the vote increased. In some ways the 2019 vote should have been expected in 2017. The reasons for the comparatively good results in 2017 can be guessed at: (a) propaganda directed against Jeremy Corbyn (eg, he is a Marxist, pro-terrorist, part of the metropolitan elite) proved largely ineffective; (b) Corbyn genuinely inspired some sections of the population: he appeared to many, especially younger, voters as a ‘man on a white horse’; (c) Brexit was not the overriding issue it was to become.

9. Boris Johnson swept to power in the Tory Party with the promise to deliver on the 2016 referendum result. He subsequently showed a ruthlessness utterly alien to the dithering Jeremy Corbyn. Labour’s step-by-step adoption of a hard ‘remain’ position, its call for a second referendum, the humiliating parliamentary defeats inflicted upon the May government, crucially with the help of Labour MPs – none of that was going to retain Brexiteer voters. Quite the opposite. They felt cheated, betrayed, by a Labour Party pledged to uphold the referendum result. For many of them Brexit served as a substitute for class politics. Needless to say, like Scottish nationalism, Brexit is a form of bourgeois politics. The same, of course, goes for ‘remain’. Hence the working class has been unnecessarily split and placed under the influence of either ‘remain’ or ‘leave’ demagogues. Labour should have rejected David Cameron’s referendum from the start. It should have organised an active boycott. Labour should reject referendums as a matter of principle and develop a positive vision for European unity.

10. Labour’s poor performance in 2019 is not only explained by Brexit. Because of the ‘Anti-Zionism equals anti-Semitism’ campaign, because of the constant attacks from the Labour right, because of wall-to-wall media hostility, Jeremy Corbyn became a highly unpopular figure amongst many traditional Labour voters. But to have expected anything else would have been naive. The Labour right openly represents capitalist interests. The same goes for the mainstream media. Without a powerful alternative mass media in the hands of the labour movement, Corbyn was forced to undergo trial by the bourgeois establishment’s newspapers and radio and TV stations. He was never likely to win.

11. Would adopting a Lexit position have won the election for Labour? Hardly. What would have been retained in the north and the Midlands would have been lost in London. Nor would Labour have won the general election if Corbyn had opposed the witch-hunt, organised open-air rallies, called for a general strike against austerity, etc, etc. All such nostrums are illusory. Of course, his silence over the witch-hunt amounted to complicity. But opposing the witch-hunt could well have produced a rebellion amongst his Campaign Group allies. Look at the disgraceful role of John McDonnell, Jon Lansman’s Momentum, the Alliance for Workers’ Liberty, Owen Jones, etc. In other words, the odds were always heavily stacked against a Corbyn-led government.

12. That was not the case with internal Labour Party rules and structures. Whereas Tony Blair carried out a (counter) revolution, tinkering change is all that Corbyn managed to achieve. That need not have been the case. With a stronger, more determined, politically clear-sighted left, there could have been a Corbynite revolution.

13. Criminally, significant sections of the left stayed clear of the struggle in the Labour Party. They were content to comment from the sidelines. Even worse, there were those – most notably, the Socialist Party in England and Wales – who actively opposed the affiliation of left-dominated trade unions to the Labour Party. A criminally irresponsible stance.

14. The Tories caught the Labour Party in a trap. First by getting Labour to front the ‘Better Together’ campaign in the 2014 Scottish referendum. That lost Labour Scotland, where there remains just one Labour MP. Second, by getting Labour to accept the legitimacy of the 2016 EU referendum. That lost Labour swathes of seats in the Midlands and the north.

16. The reformist left in the Labour Party has always been committed to the ‘next Labour government’. The danger is that many Labour members will conclude: (a) that Labour can never be changed (and therefore drop out of active politics); or (b) that the fight for social change lies not in permanent organisations and patient education, but in ephemeral street protests and economic strikes; or (c) that there needs to be a safe, acceptable, suitably centrist leader who can reach out to the Labour right, unite the party and ‘rewin the trust’ of the so-called Jewish community. Paradoxically, that almost certainly means purging the left, almost certainly using the ‘Anti-Zionism equals anti-Semitism’ big lie.

17. Those wedded to the ‘next Labour government’ perspective are doubtless well intentioned. But it is not a road to socialism. It is the road to the right and the next Tory government.

18. Our task is to fully empower the Labour Party’s mass membership, open eyes as to the hopeless nature of the reformist left and bring about circumstances whereby the Labour Party is thoroughly purged of the pro-capitalist right and the leadership is won by real, not supposed, Marxists.

19. That is why we strive in the here and now to equip the Labour left with the perspective of thoroughly democratising the Labour Party and politically refounding it. The Labour left needs to commit itself to replacing the existing clause four – but not with the old, 1918, Fabian clause four, as championed by the so-called Marxists of Socialist Appeal. On the contrary, what is needed is a genuinely Marxist clause four, as formulated by Labour Party Marxists.

20. Not that we should boycott the Labour leadership and deputy leadership elections, because none of the candidates are Marxists or even remotely principled. Eg, none of them has opposed the witch-hunt. We should give a critical vote to the main left candidates for leader and deputy leader and vote ‘lesser evil’ for the other candidates. We vote with no illusions. The chances are that even the ‘continuity’ candidates, if they get their way, would take up the mantel of Neil Kinnock.

21. That is why we support the organisation of a left opposition. However, perspectives of uniting with others on the Labour left on a lowest-common-denominator basis – eg, merely restoring ‑the practice of automatic reselection of MPs, or merely opposing austerity, Trident renewal, etc – are the politics of the broad front, which lead nowhere positive.

22. We have no principled objection to Marxists in the Labour Party working in such formations. But we put the fight for our own programme and organisational principles above diplomatic tweaking, give-and-take compromises and rotten deals. We accept the possibility of being in a minority. That is preferable to putting our programme and organisational principles onto the back burner l

Now there are just three: vote RBL as the lesser evil