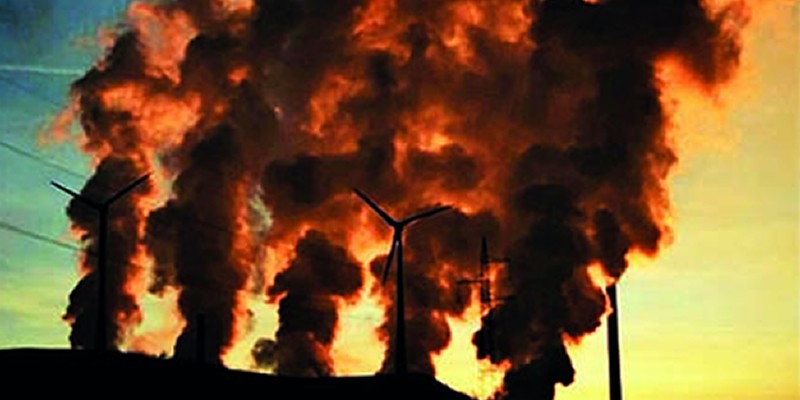 Amazingly neither the LAW steering committee, nor Tees, nor Dulwich have anything to say about the climate emergency. Jack Conrad shows why London LLA is right to link ending ecological degradation with ending capitalism

Runaway climate change is now an almost universally recognised danger. The global climate system probably sits on a razor’s edge. Only the self-interested, the downright ignorant or the wilfully complacent refuse to own up to this fact. If we take temperatures in the northern hemisphere from 1000 CE to the present moment in time, we see alternating ups and downs, but then, around 1880, a sudden and very steep upward curve occurs. The result resembles a hockey stick. Already average global temperatures are 1°C above pre-industrial times – given the time span, very big in climatic terms.

Firstly, while the climate constantly undergoes change, that happens within a relatively stable equilibrium, within a self-adjusting system. Till recently most scientists thought that all large-scale global and regional climate changes took place over a timescale of many centuries or millennia: ie, at rates hardly noticeable during a human lifetime. Gradualism was the ruling orthodoxy. That is no longer the case.

Climate scientists now recognise that quantitative change reaches a trigger point and then flips over into qualitative change: “All the evidence indicates that most long-term climate change occurs in sudden jumps rather than incremental changes.” Such conclusions were long anticipated by Marxism. Frederick Engels in his Dialectics of nature described the jump or leap: “qualitative change … is determined by a corresponding quantitative change.” Given the right conditions, climate change can be triggered by some relatively “small perturbation”, one system then tips over into another. New, radically different weather patterns, prevailing winds, oceanic currents, etc, kick in.

Second point. Scientific opinion is overwhelmingly agreed: the temperature rises over the last 100 years or so are primarily due to “human activity”. We really are living in the Anthropocene. Industry, agriculture, transport and domestic heating release carbon dioxide (CO2), methane (CH4), nitrous oxide (N2O) and other such greenhouse gases which have a determining climate impact.

A recent report by the International Panel on Climate Change projects that global warming will continue at the current rate of ~0.2°C per decade and reach 1.5°C above pre-industrial times around 2040. However, 1.5°C could easily be exceeded in half that time – around 2030 – and 2°C reached by around 2045.

Though theirs is an inexact science, climatologists fear that 1.5°C itself represents a boundary, a tipping point. If correct, after that we could see much reduced cloud cover, an end of the ice caps, soaring temperatures, rising sea levels and the inundation of low-lying cities and fertile planes. Because this might happen within a, relatively speaking, exceedingly short period of time, it could conceivably threaten the “survival of human civilisation”. Given the continuation of existing social relations, expect mass migrations, resource wars and pandemics.

True, there is the 2016 Paris climate agreement. Its 195 signatories pledge to limit emissions, so as to ensure that temperatures do not exceed a 1.5°C increase. But the Paris agreement is voluntary, vague and contains all manner of get-out clauses.

And, suffice to say, the leaders of all countries are in thrall to the mantra of economic growth. Typically this is done in the name of ensuring the wellbeing of all. But in reality outcomes are extraordinarily unequal. The mass of the world’s population barely ekes out a living. Meanwhile, the few accumulate staggering riches. Forbes reports that 1% of the world’s population own 45% of the wealth.

Then there is Donald Trump. He threatens a US withdrawal from the Paris climate agreement this year. The 45th president has already rolled back the Obama administration’s environmental measures and is on record as saying that global warming is a hoax concocted by the Chinese government in an attempt to hold back US industry. He is, of course, one of many influential climate-change ‘sceptics’ operating in high politics.

Jair Bolsonaro, Matteo Salvini, Marine Le Pen, Nigel Farage, Hungary’s Viktor Orbán and Jarosław Kaczyński in Poland come from the same mould. All view action on climate change as an imposition on national sovereignty and a barrier to growth. These counterrevolutionary revolutionaries seek to undo the ‘evils’ of the October Revolution, roll back democratic rights, stoke up blood-and-soil national chauvinism and extinguish even the possibility of socialism. That is the meaning of the so-called populist right.

So should the left rally to the defence of Paris and seek allies amongst greens, NGOs, liberals and ‘progressive’ capitalists, such as Bill Gates, George Soros, Richard Branson, Jeff Bezos and Mark Zuckerberg? Absolutely not. Two main reasons.

Firstly, we have already demonstrated the criminal inadequacy of the Paris agreement. Its maximum goal could actually represent the tipping point that brings civilisational collapse. Why uphold that? We must stand for working class political independence. That requires developing our own programme – not calling for a Jeremy Corbyn government, a general strike or the formation of soviets so as to ensure the implementation of the Paris agreement.

Secondly, it should not be assumed that protests, declarations and speechifying against the danger of runaway climate change automatically leads to progressive conclusions. Environmentalism usually comes with an ingrained acceptance of capitalism as the natural order and easily leads to demonising the urban and rural poor, especially females, in the so-called third world. This is decidedly the case when it comes to the so-called ‘population problem’.

In fact, each society possesses its own population laws. Put simply, the reproduction of the human species takes place within different social formations and under different historical circumstances – something the reverend Thomas Malthus palpably ‘forgot’. His theory of population floats outside a theorised history and therefore took no account of the fundamental distinctions that exist between one society and another. Eg, 11th century feudalism had significantly different population dynamics compared to present-day capitalism.

The peasant family – indeed broadly speaking patriarchal production as a socio-economic system – has an interest in maximising the number of children. Put more accurately, maximising the number of male children – a vital distinction. Sons are treasured because they remain within the family and through marriage bring in extra wealth in the form of dowries, wives, inheritance and in due course their own children. Girls leave the family and marrying them off costs a small fortune … their birth is often the cause of mourning in pre-capitalist social formations. Female infanticide was therefore frequent.

The peasant family is a unit of production. Boys and girls alike labour in their father’s fields from the age of five or six and, of course, not in return for money wages. Food, clothing and shelter are provided – little more. After the age of 10 it is reckoned that children are fully paying for their upkeep. From then on it is gain. Male heirs are also expected to maintain parents into old age. Children are therefore unpaid labourers and a form of social insurance. Given high infant mortality rates, it can easily be appreciated why it is a case of ‘the more, the better’.

Under capitalism – apart from its more primitive, unrestrained and brutal forms – children are an enormous expense for the proletarian family, from the cradle and now well into adulthood. During the industrial revolution, it is true, parents sold their children into work from a tender age. Children of eight or nine did 12 and 14 hour days (until the factory acts). Families could only survive if all available members brought in some kind of wage package (the wife was frequently pregnant – and, lacking reliable birth control and with the peasant mentality still lingering on, she was also typically burdened with a brood of young children hanging on to her breasts and skirts).

What of the present-day proletarian family? It is a unit of consumption. With universal primary and secondary education, and around half the school population expected to go on to university, the financial outgoings are considerable. Prudential, the insurance company, estimates that on average children cost over £40,000 each. Even after graduation many mums and dads go on to help out their offspring with mortgages, etc.

Certainly nowadays the simple reproduction – not expansion – of the proletarian family requires two adult incomes. True, average individual hours have been forced down – in 1846 parliament passed the first 10-hour act (for what was a five and a half-day week). Full-time male workers in Britain now notch up an average of 39.2 hours. But the workforce has expanded significantly, not least by drawing in more and more women. The total number employed is now over 32 million. Roughly a threefold increase over the 1930s. At the beginning of the 20th century females made up 29% of the workforce. Now it is 48%. Women workers today do on average 34.3 hours. Adding those figures together, the family unit nowadays is more exploited and certainly under more psychological pressures. There has been an intensification of labour and of relative exploitation. Not least due to these extra drains and life-limiting pressures, on average women have children later and fewer in number compared with the recent past.

In 2018 the average woman in Britain had 1.7 children – down from 2.6 in 1960. What is true of Britain is also true of other so-called developed capitalist countries. Even India is down to 2.3 children per family and is clearly heading to the 2.1 replacement rate.

There are many brilliant scientists, engineers and technologists who are furiously working, using their considerable talents, to bring about the so-called ‘third disruption’ (the first was agriculture and the neolithic counterrevolution, the second was the machine age, in particular the use of fossil fuels). The high tech utopians of Silicon Valley fetishistically worship artificial intelligence, quantum computers, gene editing, nanotechnology, 3-D printing, electronic aeroplanes, driverless cars, solar energy, etc. Amongst their more modest claims is that technology “can save the Earth by 2030”.

However, as shown by William Stanley Jevons back in the mid-19th century, such innovations, no matter how revolutionary, lead to a paradox. Increased efficiency results in cheaper commodities, which in turn results in increased demand, and with that comes the increased use of resources. The Jevons paradox is his one and only worthwhile contribution to human knowledge. Amazingly, early Fabians, such as Sidney Webb, George Bernard Shaw and Herbert Somerton Foxwell, considered Jevons and his marginal utility economics far superior to Karl Marx’s labour theory of value. Deservedly, however, Jevons is now nothing more than an obscure historic footnote.

Nonetheless, the point has been made. Capitalism treats increased efficiency merely as an opportunity to increase demand. Exchange-value rules. Not use-value. Capitalism moves according to a simple formula: M-C-M’. Money is laid out in order to secure materials and labour-power with a view to one objective and one objective alone: gaining more money. That law of political economy controls the capitalists themselves – even the greenest of greens amongst them – and makes capitalism the most uncontrollable, the most rapacious, the most polluting, the most short-termist system imaginable. Frankly, if one wanted to design a system with the intention of wrecking nature, it would be capitalism. Capitalism is a mode of destructive reproduction. 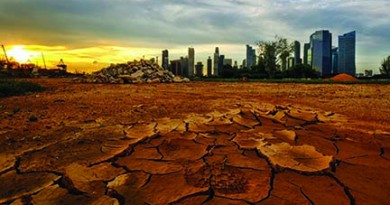 October 3, 2019 Comments Off on Climate change and system change