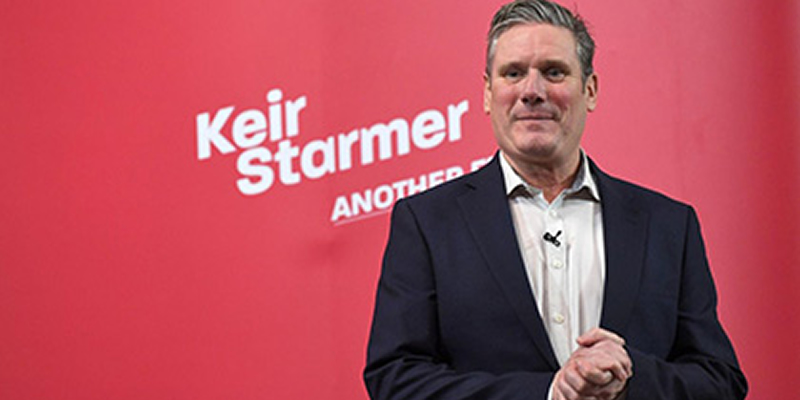 Starmer is out to prove that Labour can be relied upon as a safe alternative party of government, argues David Shearer of Labour Party Marxists

Last month Keir Starmer gave his clearest signal yet that under his leadership the Labour Party can be relied upon to act as a loyal ally of US imperialism, particularly when it comes to the Middle East.

I am, of course, referring to the huge sum that Starmer agreed to pay out of Labour coffers to seven former staff members and John Ware, a prize-winning freelance reporter (his awards include the Commitment to Media Award from the Women’s International Zionist Organization). The payment was to cover legal fees and reputational damages which resulted from the statement issued by the Labour Party under Jeremy Corbyn in response to the Panorama documentary, ‘Is Labour anti-Semitic?’.

Broadcast on July 10 2019, it had just about everyone being interviewed answering the question contained in the title in the affirmative – although virtually no supporting evidence was produced to back up the extraordinarily vague and unsubstantiated claims that were made by so many, including the presenter.

Immediately following the broadcast, Labour issued a statement. It claimed that many of the staff members interviewed had “personal and political axes to grind” and Ware’s overall presentation amounted to “deliberate and malicious misrepresentation”. This resulted in the legal action taken by Ware and the seven former staff members and the July 22 high court agreement to hand over an estimated £370,000 to the eight litigants (Labour’s own costs could take the total up to £500,000).

Afterwards Starmer effectively agreed with the programme’s title when he said that anti-Semitism had become a “stain” on the party and that those staff members who backed up the allegation had in fact given many years of “dedicated and committed service” to the party. Which makes you wonder, if they are so “dedicated and committed” to Labour, why they are now prepared to deprive the party of such huge amounts – raised to a great extent via the dues of ordinary members.

Continuing his implied condemnation of Corbyn, Starmer went on to say that Labour was now “under new management”. After all, “If we are to restore the trust of the Jewish community, we must demonstrate a change of leadership”. In other words, under the former leader Labour was indeed ‘anti-Semitic’ – yet Starmer has given us no indication of what precisely needs to change in order to get rid of this “stain”.

Following the settlement, Corbyn himself issued a statement saying he was “disappointed” by the decision to pay out such huge sums. This, he said, was “a political decision, not a legal one”, which “risks giving credibility to misleading and inaccurate allegations about action taken to tackle anti-Semitism in the Labour Party in recent years”. Corbyn said the party had been advised that it had a “strong defence” against any legal action – not least the evidence contained in the internal report that was leaked in April this year.

In a sense it is good that Corbyn can be seen to have taken some kind of stand – although it is not exactly a principled one, is it? If it is true that his leadership had been obliged to take such strong action to “tackle anti-Semitism in the Labour Party in recent years”, that seems to go along with this whole idea that prejudice against Jews had indeed become a major problem in the party.

What about the Panorama programme itself? It did, of course, feature lots of interviews with former members of staff and current Labour rightwingers, including Jewish ones (although not a single anti-Zionist Jew was interviewed – more on this below). And near the beginning there was coverage of Corbyn’s support for the Palestinian struggle and opposition to Zionism. Ware’s views on this question are well established and go back a long way: eg, he wrote in The Jewish Chronicle: “So deeply into Labour’s left has anti-Zionism morphed into anti-Semitism – itself a Corbyn legacy – that Jewish Labour members are avoiding meetings.”

It is clear that this ‘morphing’ of anti-Zionism into anti-Semitism includes those on the left who either cling to a hopeless two-state solution or call for a single Palestinian state with equal religious rights for all its inhabitants.

What about the views of the former staff members? What was notable was the fact that, while they talked of their distress, no details regarding actual cases of anti-Semitism within the party were provided. Well, unless you take the case of Ken Livingstone, featured by Ware as the first example of ‘anti-Semitism’ to come to light under Corbyn. Livingstone’s comments about the collaboration in the 1930s of German Zionists with the Nazis were “offensive” to Jews, it was claimed – although strangely the charge of anti-Semitism was quickly dropped in his case in favour of “bringing the party into disrepute”. One of the ex-staffers said that Livingstone’s suspension for three years was totally insufficient – surely such an ‘anti-Semite’ should be permanently expelled.

That brings me to those former staff members themselves. I stated earlier that no anti-Zionist Jews were amongst those who featured, but several were Jews with rather different political opinions. In fact it was soon revealed that no fewer than nine of the people interviewed were, or had been, leading members of the Jewish Labour Movement, including office-holders such as Ella Rose, JLM equalities officer, and Izzy Lenga, the international officer.

The significance of the JLM is that it is totally committed to Zionism, with strong links with the Israeli Labor Party – until 1977 every Israeli government had been led by the ILP, but it is not a left formation in any sense: it has been responsible for the systematic oppression of the Palestinians.

What about the Jewish Labour Movement itself? Originally founded in 1903 as Poale Zion, it was wound up in 2004. But immediately after the election of Corbyn as leader in 2015 it was refounded. According to Jeremy Newmark, who became the first chair of the newly recreated grouping until his resignation in 2018, in around September 2015 there was “talk about reforming the JLM” – specifically to make the Corbyn leadership as short-lived as possible.

At its April 2019 conference JLM voted no confidence in Jeremy Corbyn, who was just “unfit to be prime minister”. In fact, it scurrilously alleged:

The leadership of the Labour Party have demonstrated that they are anti-Semitic and have presided over a culture of anti-Semitism, in which they have failed to use their personal and positional power to tackle anti-Semitism, and have instead used their influence to protect and defend anti-Semites.

So is it seriously being suggested that those JLM members employed at Labour HQ wanted to see a flourishing party, to which they were so “dedicated and committed”?

It was so obvious what they were up to – especially after that notorious Panorama programme – that for once Corbyn came out openly and actually condemned those employed by the party who had joined in the smears against Labour as “institutionally anti-Semitic”. But the question we have to ask is, why did Corbyn not call out the ‘anti-Semitism’ witch-hunt from the beginning? It was clear from the start that it was the Labour left and his own supporters who were being targeted by deliberately conflating, as John Ware did, anti-Zionism with anti-Semitism.

Instead so determined was team Corbyn to appease the right that it actually became complicit in the campaign – to such an extent that anyone who denied that the party was awash with anti-Semites was labelled a “denier” (and thus guilty themselves of anti-Semitism, of course).

In reality, the whole campaign was totally false and those like the JLM knew it. In reality, they have the interests of Israel and Zionism at heart first and foremost. However, the UK establishment, in line with US imperialism, supports Israel for a different reason. It is not because it favours the strengthening of Israel in and of itself, but because it knows that its interests, as a colonial-settler state, are reliant on US imperialism.

But the problem is that Israel’s standing as an upholder of ‘democracy’ has lost much of its traction with millions, including large numbers of Jews. The expulsion of hundreds of thousands, the military occupation regime in the West Bank, the planting of settlements, the nationality law, the annexation of east Jerusalem and the Golan Heights and now possibly the Jordan Valley have caused deep disquiet. Indeed many liberal Zionists find themselves deeply troubled by the actions of the Israeli government.

And that is what the ‘Anti-Zionism equals anti-Semitism’ campaign is all about. It is about restoring traction by making criticism of the Israeli government impossible or at the very least problematic. In the new topsy-turvey world the racist ideology thereby becomes anti-racism, anti-racism becomes racism.

For Starmer, what matters is securing Labour’s place once again as the UK’s safe alternative party of government – and that means complying with the wishes of the US state department. So for him half a million is a small price to pay to achieve that end – no doubt he will be prepared to fork out further huge sums to the likes of former general secretary Iain McNicol, who is also considering legal action against the party.

And now Corbyn himself is facing legal action simply for suggesting that Ware and the JLMers should have been fought all the way in the courts. The threat against Corbyn sparked a fundraising drive that started with an initial target of £20,000, but within less than a week £300,000 had already been raised.

So who are all these people prepared to help Corbyn defend himself against legal action? No, these are not ‘anti-Semites’ defending their right to discriminate against Jews. They are conscientious Labour members who are both against the campaign to delegitimise Palestinian solidarity and for the simple need to state the truth.