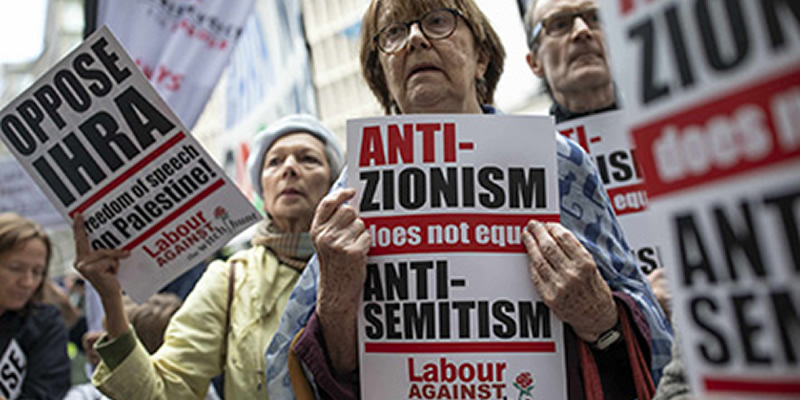 The Labour left is bracing itself for a new round of expulsions, as new leader Sir Keir Starmer stamps his authority on the party. So it was timely that Labour Against the Witchhunt (LAW) held an all-member conference online on Saturday July 4.

Over 80 members logged in to the Zoom event, which was a technical triumph for the organisers – anyone wishing to speak was able to, and members voted just like in a physical gathering. Despite this, and the LAW steering committee’s desire to avoid holding a “rally dominated by top-table speakers”, the first session fused discussion of five key items into a single, time-constrained ‘debate’. In reality people spoke about whatever aspect of the five introductions that took their fancy and unsurprisingly there was no real exchange of views. The result was that both good and bad formulations were all voted through without adequate examination of their finer points.

LAW’s chair, Jackie Walker, opened the conference, reminding comrades that the current attacks on the left were a consequence of its shameful failure to confront the witch-hunt during the Corbyn years. Reinstated expellee Moshé Machover spoke next. He drew comrades’ attention to the immediate threat of annexation – Binyamin Netanyahu’s plan to absorb Palestinian territory in the Jordan Valley. He noted how Trump and Netanyahu both rejected the ‘two-state solution’ consensus, and how this, and the annexation plans, were causing divisions within the ranks of Israel’s supporters. The appointment of Tzipi Hotovely, the overtly anti-Arab racist, as the new Israeli ambassador to London has added to these tensions. Comrade Machover warned that, as events continue to unmask the colonialist nature of Israel, the Zionists will respond by stepping up the false accusations of anti-Semitism.

Tina Werkmann, LAW’s vice-chair, presented the steering committee’s report of work. This noted the assistance LAW has provided to numerous members of the Labour Party who have been suspended or expelled. It was clear from the ‘evidence packs’ that criticisms of Israel and Zionism were used as proof of ‘anti-Semitism’. Despite LAW’s help in rebutting these charges, the members were still shown the door, because this witch-hunt is not about eradicating anti-Semitism, but getting rid of the left, she said.

Comrade Werkmann outlined LAW’s role in the formation of the Labour Left Alliance, which is attempting to pull together the genuine left in the Labour Party – that is, those members who call out the lie that the party is ‘riddled with anti-Semitism’ and stand against the witch-hunt. She also highlighted LAW’s defence of Chris Williamson, the only MP who urged the party to fight back against the anti-Semitism charges, and whose reward was to be prevented from defending his seat for Labour in the 2019 election. And the case of NEC candidate Jo Bird, who was suspended for the second time on groundless charges of anti-Semitism, but was successfully reinstated in time to be included on the ballot paper. More recently LAW has campaigned to reinstate the Wavertree Four – Constituency Labour Party officers who have been suspended for criticising their Socialist Campaign Group MP, Paula Barker. Barker has repeated the same false claims of anti-Semitism within the CLP that former MP Luciana Berger used to justify her defection to the Liberal Democrats. In actual fact it was her rightwing politics that members opposed.

And it was Kevin Bean, the suspended secretary of Wavertree CLP, who spoke next. He introduced the recent LAW statement in response to the sacking of Rebecca Long-Bailey from the shadow cabinet. Comrade Bean explained that it is not just the ‘right’ of the party promoting the witch-hunt. Many so-called ‘lefts’ have either joined in or are providing tacit support by remaining silent and keeping their heads down. Indeed evidence shows supporters of Momentum Renewal being complicit in the Wavertree Four suspensions.

The LAW statement calls for party organisations to be allowed to meet, debate and pass resolutions online. Ordinary members have been silenced by the lockdown, while the leaders carry on regardless. It calls on the NEC to repudiate the International Holocaust Remembrance Alliance misdefinition of anti-Semitism, which has turned criticism of Israel into an expulsion offence. It calls on the Campaign Group of Socialist MPs to reject the 10 pledges foisted on Labour by the Board of Deputies of British Jews, which outsources disciplinary decisions to Zionist stooges. And it demands that the major trade unions withhold financial support from Labour MPs who support the witch-hunt. Although the statement is critical of Rebecca Long-Bailey for failing to stand up to Starmer, it does support calls for her reinstatement into the shadow cabinet. We have to ask why any decent socialist would be there in the first place – socialist MPs should be busy exposing the antics of the pro-capitalist Starmer gang from the back benches.

Next, Stan Keable presented the main motion from the LAW steering committee. Its 11 concise points make clear why the left faces a witch-hunt, and how we can organise solidarity to defeat it. Point 7 is very clear:

The witch-hunt will not go away until it is openly confronted and defeated politically, and that means calling out those on the left who have been complicit. Corbyn and McDonnell are both guilty of misleading the left into the strategy of appeasement, failing to challenge the right’s false ‘anti-Zionism equals anti-Semitism’ narrative.

Comrade Keable went further, demanding that John McDonnell stands shoulder to shoulder in solidarity with fellow member Jackie Walker at the forthcoming conference of the Labour Representation Committee, of which he is president. Of course, we know this is unlikely, because Starmer has prohibited Labour MPs from attending meetings where anyone expelled from Labour is also present.

Tony Greenstein spoke next, introducing his own amendments. He described Keir Starmer as being a hardline Zionist with a mission to destroy the left using the anti-Semitism witch-hunt as his chief weapon. He also criticised Jeremy Corbyn’s spineless capitulation to fake anti-Semitism, and compared him unfavourably with Clare Short, Chris Mullen and John Prescott, who have all questioned the anti-Semitism narrative in the party. He referred to the section about himself in the leaked report, which shows that it was Corbyn’s team who pressurised the compliance unit to get on with his expulsion. Comrade Greenstein’s amendments were clearly drafted in a hurry and include some clumsy formulations: Keir Starmer is not a hard-line Zionist – he is not supporting Netanyahu’s annexation plans. All critics of Israel are not considered anti-Semites – Lisa Nandy has even called for targeted sanctions.

The debate that followed was supposed to encompass all five openings, but there was only time to hear 10 contributions. We then voted on each proposal, including some minor amendments. As previously stated, everything was passed, with votes in favour ranging from 54% to 98%.

After the break two emergency motions were considered, both moved by Tina Werkmann. The first tackled the Forde inquiry, the ‘independent’ panel set up by Labour’s national executive committee to investigate the leaked report. The comrade predicted that the inquiry will exonerate those HQ staff members whose racist, sexist and anti-party attitudes were exposed in the report, whilst condemning those who prepared and leaked the report itself. LAW will be engaging with this in two ways. First, it will make a submission that will expose the ‘anti-Semitism’ scandal and demand an end to the witch-hunt. This will be followed by a LAW-sponsored counter-conference to coincide with the publication of the Forde inquiry’s conclusions in September. Comrade Werkmann pointed out that it is not a good idea for individual LAW members to submit evidence to the Forde inquiry – unwelcome comments could result in future disciplinary action.

Jackie Walker reminded conference that the leaked report was prepared by members of the Lansmanite wing of the party, who actively support the witch-hunt, so the term ‘our side’ should be avoided, even though the ‘other side’ included the hated former general secretary, Iain (now Lord) McNicol.

As members began to vote on the motion, one of the technical shortcomings of holding an online conference became clear – a last-minute amendment was still being submitted. Clearly standing orders should provide deadlines for late amendments to avoid this confusion. The motion was passed with 97% in favour.

The final motion, on the upcoming NEC elections, provoked a heated, though largely ill-informed, debate. Comrade Werkmann explained how the change in the voting system was an attack on the left. Two years ago, under first-past-the-post rules, the ‘left’ slate won all nine seats. This time, if the ‘single transferable vote’ system is used, at least three seats will go to the rightwing slate. But the new method does open up new opportunities, in that it may be possible for candidates opposing the witch-hunt to win seats on the NEC. Two points were clear: the corrupt and undemocratic method of imposing a slate on the left by the Centre Left Grassroots Alliance was no longer viable; and any potential ‘left’ slate that included Jon Lansman would be treated with contempt. The motion offered support to those candidates who backed LAW on NEC openness and accountability, a radical reform of the disciplinary system, a review of all suspensions and expulsions, rejection of the IHRA ‘definition’ of anti-Semitism and rejection of the Board of Deputies’ 10 pledges.

In the debate we heard calls to back candidates who did not openly support LAW and in favour of a broad slate, including ‘lefts’ complicit in the witch-hunt. It became apparent that some members did not understand how STV works, and others have been so conditioned to voting for ‘lesser evils’ that they were unable to imagine genuine left candidates. The misplaced desire for a single ‘united left slate’ still exerts a mental hold on many. The likelihood is that there will be many ‘left’ slates, with different groups promoting their ‘first preferences’ based on the politics of the candidates. That still permits deals for lower-preference places. Again, when it came to the vote, the motion and three minor amendments were all carried overwhelmingly.

The final task of the day was to elect a new steering committee, and it will not surprise you to learn that all seven candidates were elected unopposed. Labour Against the Witchhunt will have its work cut out in the coming months – let us hope these conference decisions can guide that work.