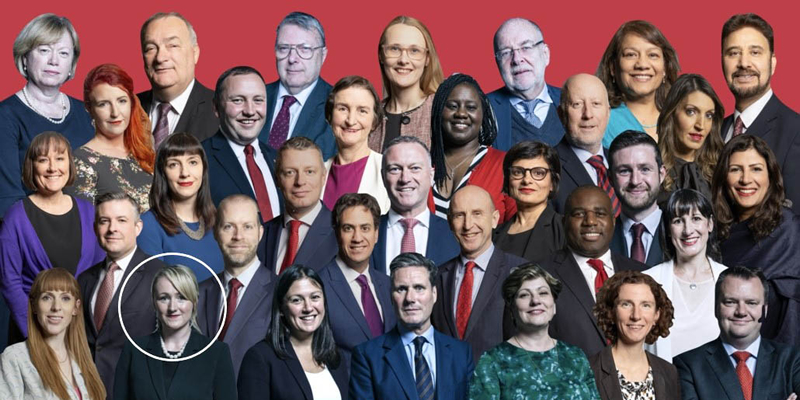 We must defend Rebecca Long-Bailey against false charges that she helped spread an ‘anti-Semitic conspiracy theory’, writes David Shearer of Labour Party Marxists. But why was a so-called ‘socialist’ willing to sit in Starmer’s shadow cabinet?

Long-Bailey’s ‘crime’, of course, was retweeting an article in The Independent based on an interview with actor Maxine Peake, in which she said: “The tactics used by the police in America, kneeling on George Floyd’s neck, that was learnt from seminars with Israeli secret services.”

This claim was immediately condemned as not only untrue, but – by Zionists in particular, and totally absurdly – as “anti-Semitic”. Starmer was pressed by Zionist groups to deliver on his commitment, made immediately following his election as Labour leader, to “tear out this poison by its roots”. As everyone knows, Labour under Jeremy Corbyn was portrayed as “institutionally anti-Semitic” and there was a huge campaign to discredit opposition to Israeli settler-colonialism by defining it as anti-Semitic.

Disciplinary action was taken against scores of Labour members. Large numbers were expelled. Amongst them were a handful of actual anti-Semites, but in most cases – certainly when it comes to the most well-known, such as Ken Livingstone (who actually resigned rather than waiting to be expelled), Jackie Walker and Marc Wadsworth – the charge of anti-Semitism was eventually dropped. Instead there was the vague catch-all of ‘bringing the party into disrepute’.

Shamefully, Corbyn failed to act to prevent this purge of his own supporters, which was instigated and controlled by the rightwing party bureaucracy. The likes of John McDonnell and Diane Abbott also preferred to keep quiet rather than express any opposition to this witch-hunt or solidarity with its victims. But silence was not enough: it was regarded as essential for the defence of Israel and its key role in the Middle East to conflate anti-Zionism with anti-Semitism and effectively outlaw anything but the mildest criticism of Israeli oppression.

Step in Keir Starmer and the official Labour statement he endorsed just a few hours after Long-Bailey retweeted the interview. This reads:

The article Rebecca shared earlier today contained an anti-Semitic conspiracy theory. As leader of the Labour Party, Keir has been clear that restoring trust with the Jewish community is a number-one priority. Anti-Semitism takes many different forms and it is important that we all are vigilant against it.

It goes without saying that the allegation of “an anti-Semitic conspiracy theory” is absurd. First, the claim that the ‘neck-kneeling’ method of ‘restraint’ was “learnt from seminars with Israeli secret services” was obviously meant to be directed against Israeli (and US) authorities, not against ‘Jews’ in general! It is irrelevant that the claim is, of course, untrue. While both US and Israeli police forces do employ this murderous technique, and they have indeed organised joint seminars, etc, the method has been written into the operational manuals of numerous police forces in the US for the best part of two decades.

Second, where is the “conspiracy theory”? According to the Cambridge Dictionary, this is defined as “a belief that an event or situation is the result of a secret plan made by powerful people”. It is pretty obvious that a ‘technique’ that has been employed for so long in both countries cannot be described as – or was intended to be – “secret”. The claim that it was the Israeli “secret services” that taught US forces all about it – however ridiculous – does not change that.

In any case, the question of who taught who what is completely irrelevant. The fact of the matter is that both the US and Israeli police have employed a brutal, inhuman, oppressive method and anyone who states that the allegation is “an anti-Semitic conspiracy theory” is either an idiot or a liar. Not that you would have thought so from the media coverage, of course. Where is there any serious questioning in the mainstream media of either element in this pathetic phrase?

But, of course, Zionist groups like the Board of Deputies of British Jews, Labour Friends of Israel and the Jewish Labour Movement all praised Starmer to the skies. What he said was exactly what they wanted to hear.

In The Independent article Maxine Peake pointedly attacked capitalism. In relation to the coronavirus pandemic, she was quoted as saying: “We’ve got to the point where protecting capital is much more important than anybody’s life.” Later she talked about a “cycle that’s indoctrinated into us all” and added: “Well, we get rid of it when we get rid of capitalism, as far as I’m concerned.”

However, her main concern was seeing the back of the Tory government: “You know what: at the end of the day, all I want is the Tories out.” That is why “I didn’t like Tony Blair, but I still voted Labour, because anything’s better than the Tories.” And that applies to the current leadership too: “I think people will get behind Starmer, won’t they? He’s a more acceptable face of the Labour Party for a lot of people who are not really leftwing. But that’s fine. Whatever. As long as the Tories get out, I don’t care any more.”

Her forthright opposition to the Tories – that and urging Labour members not to leave the party – explains why Long-Bailey called Peake an “absolute diamond” and retweeted the article.

It is worth quoting in full the former shadow education secretary’s subsequent statement:

Today I retweeted an interview that my constituent and stalwart Labour Party supporter Maxine Peake gave to The Independent. Its main thrust was anger with the Conservative government’s handling of the current emergency and a call for Labour Party unity. These are sentiments shared by everyone in our movement and millions of people in our country.

I learned that many people were concerned by references to international sharing of training and restraint techniques between police and security forces. In no way was my retweet an intention to endorse every part of that article. I wished to acknowledge these concerns and duly issued a clarification of my retweet, with the wording agreed in advance by the Labour Party leader’s office, but after posting I was subsequently instructed to take both this agreed clarification and my original retweet down.

I could not do this in good conscience without the issuing of a press statement of clarification. I had asked to discuss these matters with Keir before agreeing what further action to take, but sadly he had already made his decision.

I am proud of the policies we have developed within the party from our Green Industrial Revolution to a National Education Service and I will never stop working for the change our communities need to see. I am clear that I shall continue to support the Labour Party in parliament under Keir Starmer’s leadership, to represent the people of Salford and Eccles and work towards a more equal, peaceful and sustainable world.

All this illustrates the profound weakness of Labour lefts like RLB. Surely, instead of ‘supporting’ Starmer, she should be organising an opposition within the opposition. However, even worse were Long-Bailey’s cringing comments in a subsequent article in The Guardian, entitled ‘I know how painful anti-Semitism is and never intended my tweet to cause hurt’ (June 29). She says:

I explained to the leader’s office that I would never have intended to retweet or endorse anything that could cause hurt to anyone. I know how painful the issue of anti-Semitism has been for the Jewish community and I have been part of the efforts to eradicate it from our party.

…. Would I have retweeted the article, knowing some of its contents would cause hurt? No of course not.

In saying this she only just stops short of conceding that Peake’s throwaway remark was actually ‘anti-Semitic’. And anyway who cares about ‘causing hurt’ to Zionists? Would you apologise for causing hurt to white racists because they found opposition to apartheid South Africa offensive? Hopefully not.

But at least the Corbynite left actually spoke up in her defence. Both McDonnell and Abbott publicly opposed Starmer’s actions – and so did Momentum owner Jon Lansman. This, in contrast to their attitude in response to the witch-hunting of anti-Zionists during the Corbyn years. Why the change? The possibility of ‘prime minister Corbyn’ excused the sacrifice of one friend and ally after another. There is no such possibility now. Moreover, it is clear that if Long-Bailey can be accused of promoting anti-Semitic conspiracy theories, what about John McDonnell, Diane Abbott and Jeremy Corbyn himself?

However, the pass has been sold. Under Corbyn, Labour adopted the IHRA’s so-called definition of anti-Semitism, along with all of its so-called examples. Labour leadership candidates also agreed to the BoD’s Ten Commandments. All of this means that anyone who dares criticise Israel can easily be branded an anti-Semite.

Note that Jon Lansman’s rush to call for the reinstatement of RLB – his candidate against Starmer – did not help his Momentum Renewal slate in elections to Momentum’s national coordinating group. All 20 successful candidates in the members section were supporters of Forward Momentum. A final humiliation for Lansman: general election – lost; Labour leadership election – lost; NEC election – lost; NCG election – lost.

Either way, we should not join calls for Long-Bailey to be reinstated. While it is correct to defend her – and Maxine Peake – from Starmer’s scurrilous attacks, we must ask what a so-called ‘socialist’ was doing in an alternative government headed by the unashamedly pro-capitalist Keir Starmer. Of course, RLB is just a typical career politician who finds it advantageous to call herself a ‘socialist’. So, instead of calling for her to be reinstated, we ought to be exposing her as a fake ‘socialist’. The fact that she took a well-paid seat in Starmer’s shadow cabinet marks her out as an opponent, an enemy of socialism.