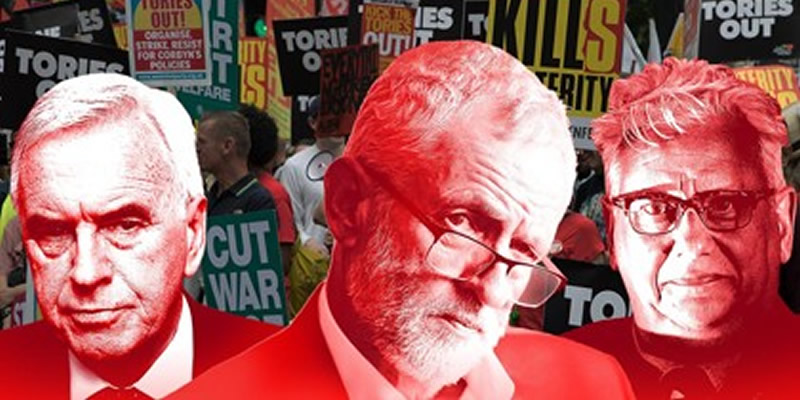 Sometimes a small thing can tell us a lot. On November 23, 13 left members staged a walkout from an online meeting of Labour’s national executive committee in protest at the election of Margaret Beckett, a supporter of Keir Starmer, as chair.

Ostensibly a protest about Labour’s right abandoning the ‘buggins’ turn’ precedent, which should have seen a left trade unionist, Ian Murray of the Fire Brigades Union, elected, this coordinated walkout was really a demonstration against the conduct of the Starmer leadership. In subsequent statements explaining the protest, the NEC 13 argued that the leadership was “promoting factional division within Labour” and that the NEC left would continue to act as “the legitimate voice of the membership and … demand that the party unite and reject the current factional approach of the leader” (my emphasis). One of the protesting CLP representatives, Mish Rahman, was reported to have said that Starmer’s latest action “fits a worrying pattern of control-freakery reminiscent of the New Labour years” and continued:

There can be no party unity until Starmer fully understands the need to work with the Labour movement and the many tens of thousands of grassroots members who can help deliver a Labour government. Our walkout today was to remind him of this, and to send a message that we will not put up with petty and repeated attacks on trade unions and members (my emphasis).

The protest comes at a crucial turning point for Labour’s official left. There has been a wave of protests from the grassroots following Jeremy Corbyn’s suspension from party membership and continued suspension from the Parliamentary Labour Party. Scores of Constituency Labour Parties and trade union branches have passed motions of support for Corbyn (when they have been allowed to discuss and decide on the issue). This reflects a groundswell of opposition against Keir Starmer and his general secretary, David Evans. Taken together with the reasonable showing for left candidates in the recent NEC elections, the scale of this opposition shows that, despite Starmer’s tightening grip on the party, there is still a sizable left that wants to challenge the “new leadership”.

The contrast of these protests from below with the abject surrender of the official left leadership could not be stronger. In the face of the onslaught from Starmer and a resurgent right these ‘leaders’ have shown that they really are “the dogs that didn’t bark”. However, the refusal of the Socialist Campaign Group and Momentum to fight back is not simply a product of careerism or cowardice, although there are undoubtedly far too many self-interested MPs and aspiring bureaucrats within their ranks. We need to face some home truths here. The political and strategic failures of the official Labour left go much deeper than that.

Let us begin by taking a closer look at the statements of the NEC 13 highlighted above. Laura Pidcock’s tweets about the “disrespect” shown by Starmer towards the left and Mish Rahman’s complaints that “party unity” is being undermined by “factional division” exposes the impotence and the self-limitation inherent in their politics. When they accuse Starmer et al of not playing by the rules or of launching attacks which undermine the party’s unity they speak as affronted Labour loyalists desperate for the party to come together again.

Like Jeremy Corbyn when he was leader, Pidcock, Rahman and their co-thinkers offer olive branches and concessions to the right when under attack. Yet they stood idly by when comrades on the left were suspended or expelled during the Corbyn period, a pattern of appeasement and collusion in the witch-hunt that has led to the blind alley in which the official Labour left now finds itself. Thus, all of their attention is focused on securing Corbyn’s reinstatement as a Labour MP: the thousands of socialists who have been purged are ignored and sacrificed in the interests of “party unity”. Similarly, they continue to give further ground when they preface their demands for Jeremy Corbyn’s reinstatement with calls to accept the findings and recommendations of the Equality and Human Rights Commission report in full. Far from digging in for a fight, the official left are only digging their own graves.

This focus on “party unity” is the official left’s original sin. Despite the protests and the token walkout, the Labour left and the Labour right are far from being at daggers drawn: they are symbiotically linked. However, whilst the Labour right has its assured place in the world as an integral part of the capitalist state, matters stand rather differently for the official left. They cannot exist without the right and can only envisage their political project being pursued through the election of a Labour government. Thus, instead of creating a clear demarcation between the supporters of capitalism and the partisans of working class politics, unity remains the Labour left’s entire raison d’être. The classic model of this parliamentary road to socialism remains the post-1945 Attlee government. Nostalgia for this ‘socialist Labour government’ is still widespread on the Labour left.

Strategically, because the party’s apparat remains firmly in the hands of the right, backed by the trade union leadership, and the left represents only a minority in the PLP, securing such a government requires unity with the Labour right – inevitably obtained at the price of political concessions and compromises by the left. The ‘socialism’ of the Labour left was, at best, the reformism exemplified in the nationalisation of basic industries, the welfare state and the redistributive Keynesianism that were only made possible by the conditions of the post-war boom. The Alternative Economic Strategy, advanced by the Labour left in the 1970s and 1980s, was largely a refinement of the post-1945 strategy that has now become even more absurd, given the very different political and economic situation that emerged at the end of the boom. Even the limited programme of a managed capitalism, which cannot even be described as ‘reformism’, advanced by Corbyn and the Labour left at the last election is equally utopian, given the nature and the depth of capitalist decline internationally.

The current crisis of the Labour left is a hangover from the failure of Corbynism and reflects the illusion that Labour can be transformed into a radical socialist party – a strategy that inspired many who joined the party during Corbyn’s leadership and which still continues to shape the politics of Forward Momentum, the Labour Representation Committee and the Labour Left Alliance. The experience of the Corbyn moment and the continued inability of the official left, at all levels, to mount a militant response to the attacks of the right shows that the Labour Party is irreformable in that way. Its structural and institutional ties to the state have been strengthened throughout the 20th century, as it replaced the Liberals to become the second eleven of British capitalism.

However, Corbyn’s election as Labour leader raised the fear that it might slip out of the control of safe, pro-capitalist politicians and present some type of a threat to the status quo. Starmer’s counterrevolution and his attempt to complete the Blairite project by eliminating the left as a political force within the Labour movement shows how scared the bourgeoisie were of the forces that might have been unleashed by Corbynism. Given the timidity and downright cowardice of the Corbyn leadership in practice, they need not have been so alarmed. But they are never again going to give the Labour left the chance to prove them right. Under Starmer Labour must once again be made into a thoroughly reliable pro-capitalist party, sound on foreign policy and defence, and willing to cooperate with British capitalism’s attempts at home to overcome the current crisis at the expense of the working class.

The pathetic response of the official left, and its outliers, with their calls for stoic forbearance and party unity in the face of a full-blooded civil war unleashed by the Starmer leadership, is merely a continuation of the disastrous failures of the Corbyn period. Self-imprisoned within the political and structural constraints of Labourism, they are inextricably bound into the politics of the Labour right. Here they stand: they can do no other.

Unless Starmer secures his final victory, Labour will remain a bourgeois workers’ party and thus an important site of struggle for Marxists. However, if the aims of the enemy before us are clearly visible, the intentions and the determination of some on the Labour left are much less certain. Their record of compromise and collusion with the witch-hunt during Corbyn’s leadership, their continued concessions to the Labour right on the EHRC report and their failure to defend the thousands expelled or suspended from the party during this ongoing purge show that they are very unreliable allies in Labour’s civil war.

Labour Party Marxists will continue the fight for militant politics and a revolutionary programme within our movement. As revolutionaries we have a duty to tell the truth and make a clear distinction between our politics and strategy, on the one side, and those of the compromising, fake left in the Labour Party, on the other. That not only means a resolute, uncompromising defence of all those who have come under attack during the witch-hunt: it also demands that we now go over to the political offensive.

The strategy of the official Labour left has proved catastrophic against the witch-hunt and must be exposed for the failure it is. That failure ultimately has its roots not simply in the personalities and inadequacies of individual leaders, but is an inevitable consequence of Labourism and reformism, no matter how ‘left’ it styles itself. All the time that the Labour left calls for ‘party unity’ or attacks our enemies in the Starmer camp for ‘factionalism’ they are obscuring the real nature of this battle. We cannot afford this confusion and compromise.

Symbolic online walkouts and carefully crafted motions that try to avoid falling foul of the party bureaucracy are not enough. We are at a crucial turning point in this civil war: now is not the time for a Christmas truce! Step up the fightback and carry the war to the enemy!