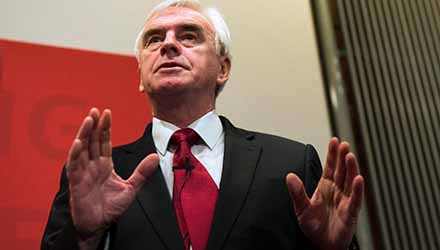 Around 120 Labour Representation Committee members gathered in London’s Conway Hall on February 10 for yet another angst-ridden ‘special’ general meeting (SGM), in which a bewildered leadership shared with its rank and file its own failure – like most of the left – to draw into membership or engage with the ‘radicalised’ mass intake of Corbyn supporters into the Labour Party.

The exception to this failure is, of course, Momentum. The LRC executive’s statement jealously admits that Momentum “has successfully organised many of their number” into 150 local groups, which have “formidable electoral achievements under their belt” and are “feared by the Tory enemy”. By contrast, the statement repeats the LRC’s own longstanding wish to “rebuild” its “network of local groups”. Before this meeting it had called on “experts on particular subjects” to develop an imagined “comprehensive and impressive bank of educational material” on the “new LRC website” – the “formation of local LRCs may hopefully follow as a result”.

This pious wish, however, bears no relation to the reality. As political secretary Mick Brooks accurately declared, “The LRC has stagnated” in this “most favourable situation for socialists”: the Labour leadership is “probably the most leftwing ever”, the Tories are in disarray and the 2008 economic crisis showed that “capitalism has failed”.

Founded in 2004 in the dark days of New Labour – when clause four ‘socialism’ had been destroyed and Blairism seemed permanently victorious – the LRC was based on the belief that Labour had to be rebuilt from scratch, just as the original LRC had created the party in 1900. Hence the organisation’s cumbersome, unwieldy structure, designed as a replica of the party: the rights of individual members were to be trumped by affiliated trade unions and socialist groups, and – ironically, keeping up with New Labour – bureaucratic ‘equality’ rules were to guarantee the election at all levels of women, LGBT, BAME and disability representatives, instead of assessing candidates on the basis of their politics. But news of the death of Labour was exaggerated, and as a result the LRC has always been plagued by uncertainty of purpose.

Now, with John and Jeremy heading the party – backed by Momentum’s mass membership and those 150 local groups – the project of refounding old Labour is superfluous. So what is the point of the LRC? Back in February 2016, at a previous SGM in the early days of Momentum, the NEC statement opted for “maintaining the existence of our own organisation – for the time being”, but foresaw the possibility that it may soon have “outlived its usefulness”. And John McDonnell mused that “maybe in the future” there will be “just one organisation” (Weekly Worker February 25 2016).

However, Jon Lansman’s January 10 2017 bureaucratic coup put paid to that happy prospect, and at this SGM Momentum’s shortcomings became the raison d’être of the LRC. “We are not a fan club for the Corbynite movement,” claimed comrade Brooks. “Momentum does not have conferences, elections, policies. It has a democratic deficit.” And chairperson Matt Wrack, general secretary of the Fire Brigades Union, stated: “The key role of the LRC is to ensure discussion and debate takes place.” As the NEC statement declared,

The LRC is pluralist internally. We can develop independent-minded supporters of the Corbynist movement, which neither Momentum nor the [Campaign for Labour Party Democracy] are designed to do …. We regard democratic discussion and debate within our ranks as the essential oxygen of our organisation.

Then why, we must ask, does it convene ‘special’ general meetings, in which amendments to the rambling NEC statement are not allowed? Take it or leave it. And why were Labour Party Marxists and a few other political groups quietly ‘disaffiliated’ by the leadership in 2016, if not to curtail discussion in order to avoid embarrassing criticisms of Corbyn and McDonnell? This is more or less confessed in the NEC statement, where it shamefacedly attempts to set out the limits of legitimate discussion: “Debate within the LRC is not concerned to score points or make sectarian contributions against others.” So no polemics. “As long as we see ourselves contributing in a positive light to a movement going forward rather than carping at its inadequacies we can’t go too far wrong.” So no real criticism.

The LRC leadership seems, at last, to be overcoming its reluctance to take sides in political struggles within trade unions. The NEC statement asserts:

Unlike CLPD and Momentum, we actively support workers’ struggles and do not confine our attentions to the Labour Party. We are in the process of organising a Unite LRC caucus … the first of trade union caucuses for all major unions. … We need to organise within the unions … for trade union democracy and socialist policies.

All very positive – but why not adopt Labour Party Marxists’ aim to win all trade unions to affiliate to Labour?

LRC president John McDonnell turned up in the afternoon, fresh from Labour’s ‘alternative models of ownership’ conference, which, he said, was shaping policies “almost like those of the LRC 10 years ago”. Since the 2017 general election, the Labour leadership has been “consolidating”. Unintentionally exposing the LRC’s overblown claim that the election had been fought on a fully socialist manifesto, he stated that For the many, not the few was “just for that election”. So now “we need to radicalise those policies” and “develop an implementation manual”, together with “draft legislation ready for office”.

And, worryingly, he claimed: “The Parliamentary Labour Party are signed up to this exercise.” Wrong, wrong, wrong, John. The LRC NEC statement takes the opposite view – not that anyone bothered to tell him. Perhaps that would be seen as negative or “carping”. Or maybe the NEC statement itself is “carping”? Here is what it says:

The Parliamentary Labour Party and the party bureaucracy remain firmly in the hands of the right wing. They seemed determined to rule or ruin. Corbyn’s role as leader is untouchable for the time being on account of his 2017 electoral success, [but] his position, and that of his supporters, remains precarious.

Spot on, NEC. But comrade McDonnell is already on a different page. “When the LRC was set up on Tony Benn’s advice, we were within a Labour Party we could not recognise. We are on the edge of government now.” So the LRC’s role now should be as a “think-tank, to develop ideas into policies” – and he saw Mike Phipps’s book For the many: preparing Labour for power as making a start.

A revealing episode at the SGM was an emergency motion moved by Marc Wadsworth of Grassroots Black Left. This criticised the way in which the “centre-left slate” had been selected for the forthcoming elections for Constituency Labour Party seats on Labour’s NEC:

This SGM notes with grave concern that the ‘centre-left’ slate for Labour’s next NEC elections appears to have been chosen unilaterally by Momentum without consulting its members and before the Centre-Left Grassroots Alliance had completed its discussions on the slate. We consider that this could split the left and divide supporters of Jeremy Corbyn’s progressive agenda for government. Irrespective of the outcome and content of the slate, we believe this is not a democratic and transparent process in line with Jeremy’s ‘new politics’. We call on the incoming LRC NEC to formulate a response to challenge the democratic deficit in deciding the slate.

In my years as an LRC member, I confess I have never discovered exactly how candidates for the slate were selected – it always seemed to be done behind closed doors, and I do not remember ever being asked to vote on the matter. The LRC leadership was supposedly consulted, though it had sometimes complained about not being invited or about their views being ignored, especially with respect to their longstanding wish to remove Ann Black. The CLPD, under Pete Willsman’s leadership, always defended Ann Black and always got its way.

But the left is evolving new forms, so the cosy, behind-the-scenes process has to be made transparent, and the members of the participating groups have to have their say. This time, not only was Momentum involved, but also Jewish Voice for Labour (and perhaps other groups). The newly formed Grassroots Black Left, however, was excluded.

What happened, we are told, was that all parties except the CLPD wanted a slate without Ann Black, because of her role in the anti-Corbyn shenanigans of general secretary Iain McNicol’s apparatchiks. They had excluded masses of new Labour members from voting in leadership elections, suspended left-led CLPs and waved through the automatic suspension and even expulsion of leftwing members on trumped-up charges.

However, the CLPD would only accept a slate which included Ann Black. But when the 80-strong CLPD executive (in reality, volunteers who are voted in as a block at the AGM) took the unheard of step of actually voting to resolve a disputed issue, CLPD secretary Pete Willsman and his co-thinkers lost the vote narrowly. Then, when Willsman and co refused to accept the vote, Jon Lansman jumped in to impose a Momentum slate – without consulting the Momentum membership, of course.

The slate-making process is broken. It is opaque, carried on behind closed doors. Not only were Momentum members not adequately consulted: neither were LRC members, nor the LRC itself.

Graham Bash, supporting the motion – which, after all, only commits the LRC to fight for a democratic slate-making process, confirmed that the present system is broken, but insisted, quite rightly, that “fielding an alternative left slate would be a disaster”. The motion was carried overwhelmingly.