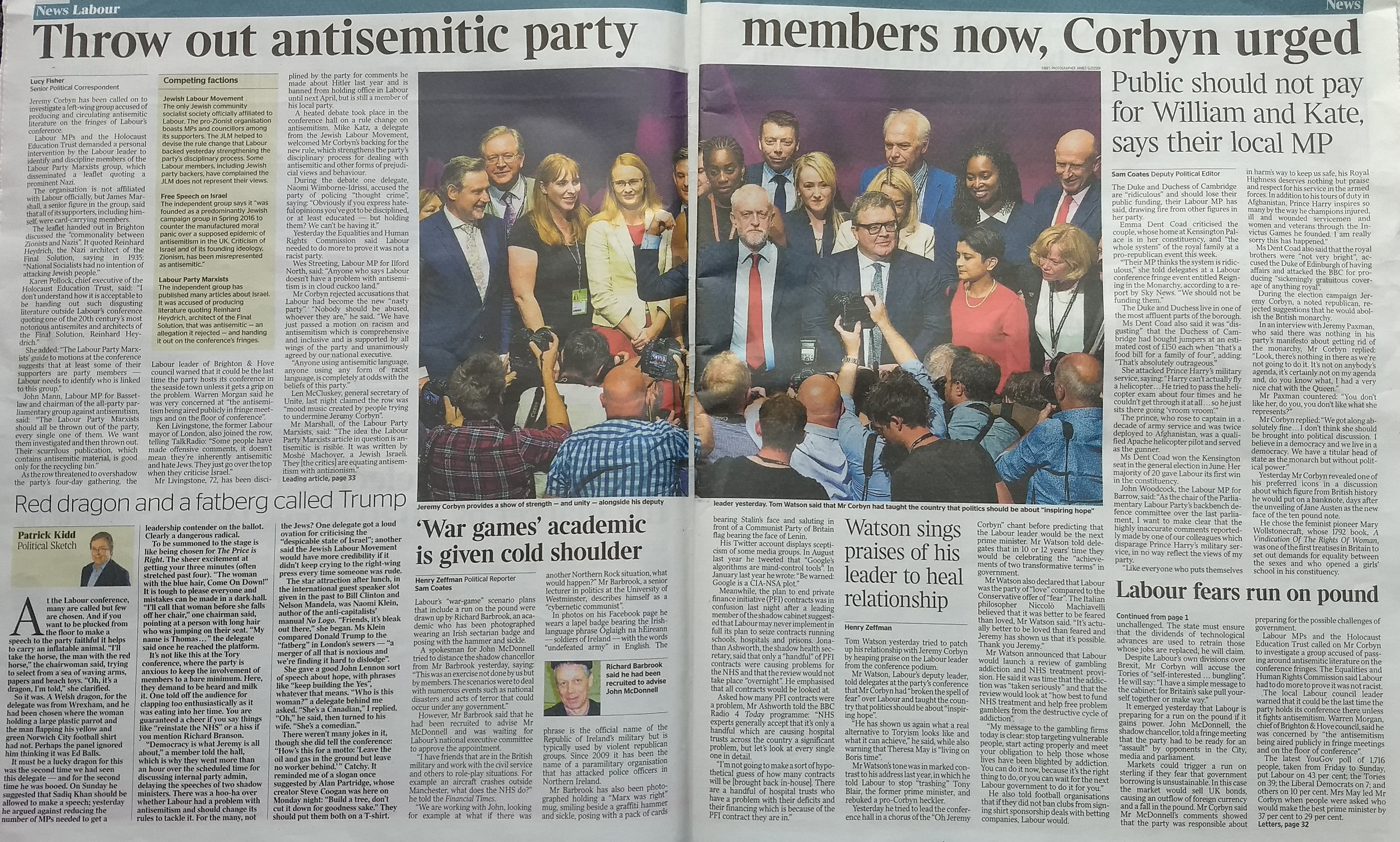 It had to happen sooner or later. Now Labour Party Marxists has been accused of being “anti-Semitic”. John Mann MP and the Holocaust Educational Trust demand our members be expelled from the Labour Party for the crime for carrying an article in our latest edition of Labour Party Marxists by Moshé Machover, which discusses if Zionists really did collaborate with the early Nazi regime.

We call on socialists to read the actual article and make up their own mind.

Below is the article in today’s The Times (September 27) carrying the accusations.

And here the article by Moshé Machover, a lifelong anti-Zionist Jewish Israeli campaigner.

Jeremy Corbyn has been called on to investigate a left-wing group accused of producing and circulating antisemitic literature on the fringes of Labour’s conference.

Labour MPs and the Holocaust Educational Trust demanded a personal intervention by the Labour leader to identify and discipline members of the Labour Party Marxists group, which disseminated a leaflet quoting a prominent Nazi.

The organisation is not affiliated with Labour officially, but James Marshall, a senior figure in the group, said that all of its supporters, including himself, were card-carrying members.

The leaflet handed out in Brighton discussed the “commonality between Zionists and Nazis”. It quoted Reinhard Heydrich, the Nazi architect of the Final Solution, saying in 1935: “National Socialists had no intention of attacking Jewish people.”

Karen Pollock, chief executive of the Holocaust Educational Trust, said: “I don’t understand how it is acceptable to be handing out such disgusting literature outside Labour’s conference quoting one of the 20th century’s most notorious antisemites and architects of the Final Solution, Reinhard Heydrich.”

She added: “The Labour Party Marxists’ guide to motions at the conference suggests that at least some of their supporters are party members — Labour needs to identify who is linked to this group.”

John Mann, Labour MP for Bassetlaw and chairman of the all-party parliamentary group against antisemitism, said: “The Labour Party Marxists should all be thrown out of the party, every single one of them. We want them investigated and then thrown out. Their scurrilous publication, which contains antisemitic material, is good only for the recycling bin.”

As the row threatened to overshadow the party’s four-day gathering, the Labour leader of Brighton & Hove council warned that it could be the last time the party hosts its conference in the seaside town unless it gets a grip on the problem. Warren Morgan said he was very concerned at “the antisemitism being aired publicly in fringe meetings and on the floor of conference”.

Ken Livingstone, the former Labour mayor of London, also joined the row, telling TalkRadio: “Some people have made offensive comments, it doesn’t mean they’re inherently antisemitic and hate Jews. They just go over the top when they criticise Israel.”

Mr Livingstone, 72, has been disciplined by the party for comments he made about Hitler last year and is banned from holding office in Labour until next April, but is still a member of his local party.

A heated debate took place in the conference hall on a rule change on antisemitism. Mike Katz, a delegate from the Jewish Labour Movement, welcomed Mr Corbyn’s backing for the new rule, which strengthens the party’s disciplinary process for dealing with antisemitic and other forms of prejudicial views and behaviour.

During the debate one delegate, Naomi Wimborne-Idrissi, accused the party of policing “thought crime”, saying: “Obviously if you express hateful opinions you’ve got to be disciplined, or at least educated — but holding them? We can’t be having it.”

Yesterday the Equalities and Human Rights Commission said Labour needed to do more to prove it was not a racist party.

Wes Streeting, Labour MP for Ilford North, said: “Anyone who says Labour doesn’t have a problem with antisemitism is in cloud cuckoo land.”

Mr Corbyn rejected accusations that Labour had become the new “nasty party”. “Nobody should be abused, whoever they are,” he said. “We have just passed a motion on racism and antisemitism which is comprehensive and inclusive and is supported by all wings of the party and unanimously agreed by our national executive.

Jewish Labour Movement
The only Jewish community socialist society officially affiliated to Labour. The pro-Zionist organisation boasts MPs and councillors among its supporters. The JLM helped to devise the rule change that Labour backed yesterday strengthening the party’s disciplinary process. Some Labour members, including Jewish party backers, have complained the JLM does not represent their views.

Free Speech on Israel
The independent group says it “was founded as a predominantly Jewish campaign group in Spring 2016 to counter the manufactured moral panic over a supposed epidemic of antisemitism in the UK. Criticism of Israel and of its founding ideology, Zionism, has been misrepresented as antisemitic.”

Labour Party Marxists
The independent group has published many articles about Israel. It was accused of producing literature quoting Reinhard Heydrich, architect of the Final Solution, that was antisemitic — an allegation it rejected — and handing it out on the conference’s fringes.