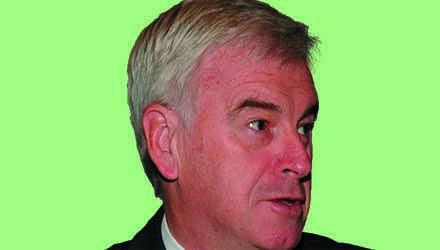 An air of desperation and self-deception hung over the 200 or so left activists, MPs and ‘policy experts’ gathered together in the big hall at the University of London Union at the invitation of leading left MP John McDonnell, under his Labour Left Platform umbrella. Simon Hewitt, a young member of the Labour Representation Committee’s Labour Briefing editorial board, expressed this desperation: “Labour will be dead in five years if we don’t sort ourselves out.”

The fragile nature of the lowest-common-denominator (ie, undemocratic) consensus type of left unity achieved was illustrated when former Lambeth anti-cuts councillor and Unite activist Kingsley Abrams announced that he had resigned his Labour Party membership and defected to the Trade Unionist and Socialist Coalition in disgust. He had taken a stand against cuts on Lambeth Labour council in line with Unite policy, but Unite did not fight his suspension from the Labour group, which was now implementing cuts. The ‘emergency budget’ anti-austerity motion to Labour’s national policy forum had been voted down by the affiliated trade union delegates. And, to cap it off, Unite had just made a £1.5 million donation to Labour’s election fund, on top of its affiliation fees.

Comrade McDonnell remarked that he had handed the microphone to Kingsley because “several others have done the same” (eg, Warrington anti-cuts councillor, Unite activist and LRC national committee member Kevin Bennett also defected to Tusc recently), and, ominously, “we do talk about the philosophical question whether to be in or out of the Labour Party”. Since the meeting we have learned that RMT president Peter Pinkney has joined the Green Party and will be standing as a Green candidate for Redcar in the general election.1

Can the left persuade Labour’s front bench to adopt an alternative, anti-austerity economic programme, in the short time available before May 7? Or will Labour continue alienating good class-struggle fighters with its austerity-lite commitments, promising to make the working class carry on paying for capitalism’s crisis? Given the haemorrhaging of Labour votes to the Scottish National Party and the Greens, both posing to the left, against austerity and Trident, an absolute Labour majority now seems unlikely, but, with the Tories losing support to the UK Independence Party, Labour may well end up with the most MPs. Comrade McDonnell’s plan is to make the left into a coherent force which can then negotiate as a player in any post-election coalition negotiations.

In the Marxist tradition of ‘telling it like it is’, I have to say to comrade McDonnell that this wishful thinking is delusional. Unfortunately, if we are to change the world, we must first be truthful about where we are at. Our class is in a weak condition at present – confused, disorganised and disorientated; and so is the left itself. There is no quick fix for this condition, no short cut, no easy road to socialism. A protracted struggle must be undertaken to democratise and rebuild our movement and re-educate our class in socialist ideas and politics before it can deliver effective solidarity to anyone, let alone approach the question of taking state power away from the capitalist class.

Much more than a simple majority of MPs is required: socialism cannot be delivered from above by an enlightened elite. A genuinely socialist government in Britain (not a Miliband/Balls Labour government trying to run an imagined ethical capitalism) implementing its minimum programme of immediate measures in the interests of, and empowering, the working class, could not survive the inevitable counterrevolutionary efforts of capital, unless it was based on the active, conscious support of a substantial majority of working people. Nor could it last long on its own, if the workers’ movement in Europe had not also matured to a similar level, capable of delivering real solidarity action to a socialist government here, under attack.

A notable lacuna in the left’s “alternative narrative” (comrade McDonnell’s words) was the omission of any demands for democratisation of the state. The three themes were austerity, rail nationalisation and trade union rights. It was left to the Socialist Campaign for a Labour Victory (promoted by the Alliance for Workers’ Liberty) to proclaim, on its leaflet, the abolition of the monarchy and the Lords, a federal republic, and a worker’s wage for MPs. These demands may not be doorstep vote-winners today, but they are indispensable conditions for the working class to overpower capitalism.

Commendable though it is to attempt to bring the weak, divided, disorganised and rudderless Labour left into the same room – “the first time in a long while that all of the left organisations in the Labour Party have come together”, in comrade McDonnell’s words – this gathering was evidence, to any objective observer, of the palpable weakness of the left and of the workers’ movement as a whole, not our strength.2 As Aslef national organiser Simon Weller remarked, the speeches complaining about anti-working class coalition government policies amount to “preaching to the choir”. Privatisation of public transport has been going on for 40 years, he said – in other words, under Labour as well as Tory administrations. The question not being answered was, “How do we set about changing the Labour Party? – and it is not through the national policy forum!”

The key to developing an effective workers’ movement, and to transforming the party and the unions, is democracy – and democracy starts at home, in the organisations of the left. The ineffective, pretend unity of fudged consensus ‘decisions’ made without transparency, motions, debate and voting, will not do. We need organisational unity in action, based on freedom of discussion and acceptance of majority decisions.

Comrade McDonnell, opening the meeting, said: “People understand that they are being ripped off, and are desperate for a real Labour government”, but they are “not seeing a display of real Labour politics”. The purpose of the Left Platform, as stated on its website, is to “demonstrate practically what a Labour government could do in office”, and “to consolidate a common left policy platform that can give people hope”.3

But fostering hope in a Labour government under present realities means setting people up for disillusionment. History shows that Labour governments running capitalism undermine and disempower the workers’ movement, setting the scene for more rightwing Tory governments. The ‘official communist’ programme (Britain’s road to socialism) of a series of increasingly leftwing Labour administrations is a pipe dream. Our movement must be built in opposition to whatever capitalist government is in office, and the task of transforming the trade unions and the Labour Party into vehicles for socialism, of “breaking the stranglehold of the bureaucracy”, as Brent and Harrow LRC activist Steve Forrest put it, will be hindered by Labour taking government office. We need socialist MPs elected, to give a voice to the workers’ movement. But we need a Miliband Labour government like a hole in the head.

Unfortunately, sectarian divisions amongst the Labour left are every bit as alive as between the left groups outside the party. True, the Campaign for Labour Party Democracy had signed up amongst the Labour Left Platform sponsors, and I spotted its secretary, Pete Wilsman, in the hall. But there was no sign of its leading light, Ken Livingstone, while Christine Shawcroft only ventured as near as the pavement in Malet Street, as the brave lone seller of the so-called ‘original’ Labour Briefing – in competition with the one produced by the LRC, whose sales team was out in force.4 Comrade McDonnell alluded to these difficulties when he commented that the event had “showed that we can work together”.

The next step, said comrade McDonnell in his summing up, is to “ask every Labour candidate” to support the Labour left’s “alternative narrative” of “what needs to be done”, which had been the achievement of the event. And we will reconvene in the first week after the general election to take the campaign forward, as that is the time, he claimed, when a new Labour government (if that is the result) will be most susceptible to pressure from the left.

2. See also Jon Lansman’s useful summary of what was said in each session, and his pertinent criticisms of the left: “While the Labour left continues to work in the amateurish manner described above, the right has little to fear” (www.leftfutures.org/2015/02/reflections-on-the-left-platform-meeting/#more-41075).

4. When the 2012 AGM of the Labour Briefing magazine voted to merge with the LRC, Jenny Fisher, Christine Shawcroft, Richard Price and three others, instead of accepting the democratic decision, turned the merger into a split. They set up Labour Briefing Cooperative Limited and launched a rival magazine entitled the original Labour Briefing.

One thought on “Wishful thinking rather than hard truth”